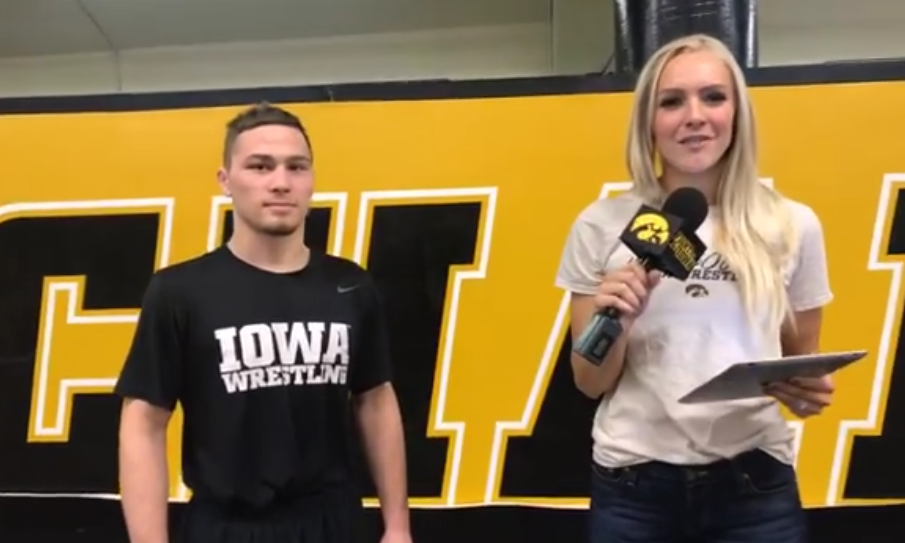 We know its been a hot topic of debate on whether or not true freshman Spencer Lee will have his redshirt pulled this season, but is there a chance that Laura Vandenberg of Hawkeye Sports let the cat out of the bag?

During their Facebook Video segment on Iowa Wrestling’s “Move of the Week” Vandenberg asks Lee the following question, “So you’re going to walk out into Carver for your first time Friday night versus Rider University, what are you looking forward to?”

Lee politely corrects the reporter with the reply of “Well if I do walk out on Friday…”, which could mean one of two things: either Lee is just being polite and it is not the planning on wrestling Friday, or he was trying to put the cat back in the bag. We already know Lee has weighed in and sat on the bench as a member of the team last week during the Iowa City Duals. Our own Tony Hager snapped a photo of Lee on the bench.

So whether this was a slip up by Hawkeye Sports, or just a mis-phrased question, we won’t know the answer until roughly 7:00 PM on Friday night. The good news is Iowa is a school that prefers to start at the traditional weight of 125 pounds, which would mean Lee could potentially kick the dual off. During his presser after the Iowa City Duals, Brands stated he intends to “bring Lee along” like he is the starter and he also said that his wrestler is wrestling live and doing well.

One thought on “Spencer Lee To Make His Debut Friday?”