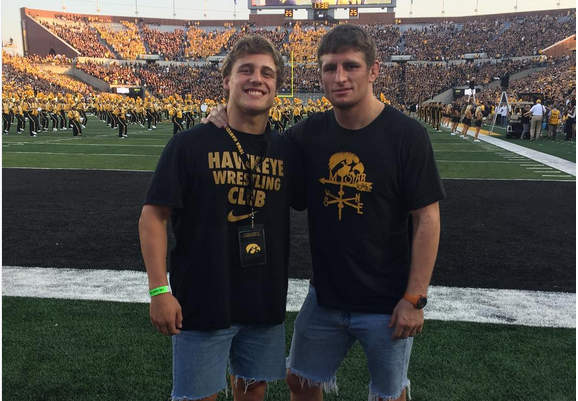 In case you haven’t heard, last weekend was a big one in Iowa City as the Hawkeyes hosted several top recruits from the class of 2018 who were making official visits to Iowa. One of those wrestlers – Cedar Rapids Kennedy’s Cam Shaver – has since committed to the Hawkeyes

Another one of those wrestlers on campus was Mifflin County, Pennsylvania’s Trent Hidlay, who took the time to catch up with IAwrestle on how his official visit went. Hidlay is currently ranked #2 in the country at 170 pounds by Flowrestling, and is considered one of the top upper-weight prospects in the country for the class of 2018.

“Being able to hang out with the guys on the team, be in the atmosphere, and see how they all live on a daily basis.” Hidlay said on his top takeaway from his weekend visit, “I know it was a special weekend since it was a visit weekend, but being just around the guys was fun.”

While on campus the recruits were treated to a tailgate and they were also able to attend the Iowa-Penn State football game at Kinnick Stadium. Earlier this spring Hidlay was on campus for an unofficial visit, and while he acknowledged a lot of the experiences were the same from his May visit he also commented that this past weekend’s experience definitely had an element of fun to it.

“I mean you’re meeting with the same coaches, wrestlers, seeing the same facilitates and the academics don’t change, but it was a lot more fun than my unofficial visit.” Hidlay told IAwrestle, “I ate a lot of food. I probably gained around 10 pounds. You know on an official visit they can pay for everything and they treat you like royalty. I got to stay with one of the guys and it was a lot of fun.”

Hidlay also got to experience the intensity of the Iowa wrestling room as he observed a practice which included wrestlers from both the team and the Hawkeye Wrestling Club. While fans showing up to wrestling practice before an Iowa football game is hardly something new, Hidlay did comment that there were a few unexpected visitors in the room as well.

“It was awesome.” Hidlay said of the team’s practice session, “I got to watch the (HWC) guys in addition to the team and they go at it hard. It was really cool to see than fans show up and there were even some PSU fans, so that was fun.”

After wrapping up our interview Hidlay commented that his plan’s haven’t changed as far as his recruiting goes. Earlier this fall Hidlay took a visit to North Carolina State and has plans to go to Lehigh this weekend followed by Purdue the next weekend. After that Hidlay plans to sit down and start making his decision, with the goal to have his commitment made prior to the start of the regular season.