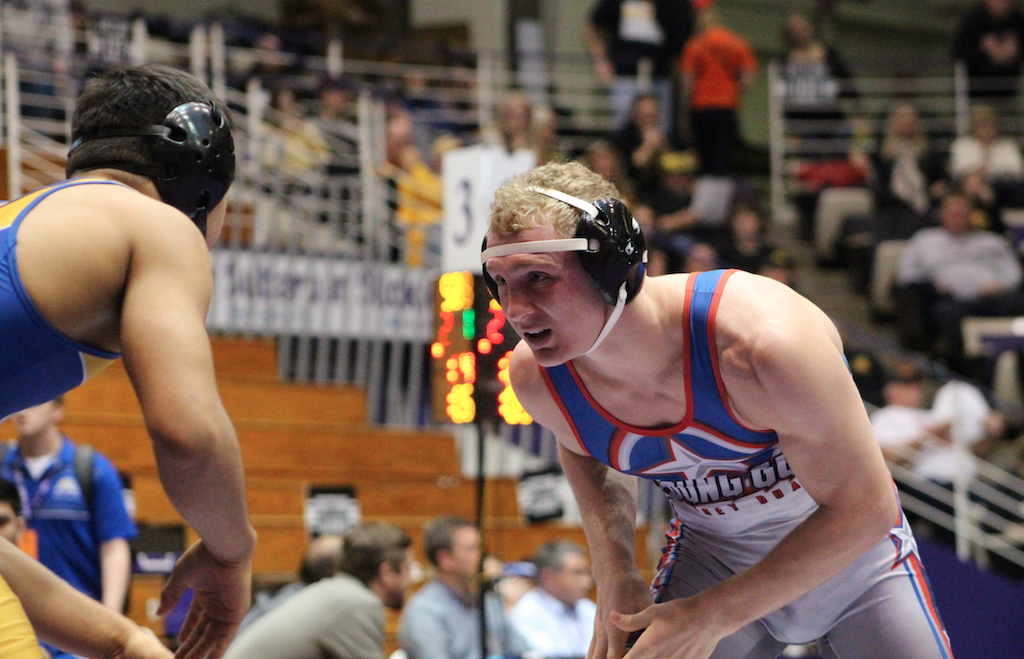 After three straight weights that feature a clear starter, we head back to muddier water as Iowa’s upperweight situation is truly full of questionmarks. That’s not to say that Iowa doesn’t have quality options at the top four weights, but there are a lot of moving parts that could alter how this lineup looks between a preseason projection and the finished product in March. Starting at 174 pounds, we will likely see a battle between redshirt freshman Kaleb Young and NCAA qualifier Joey Gunther, who both competed at 165 pounds last season.

All Gunther did last season was put his head down and went to work. Amid a season where a big topic of discussion was centered on whether or not Tom Brands would pull Alex Marinelli’s redshirt, Gunther went out and did his job, compiling a 20-10 record including a 2-2 performance at the NCAA tournament. His freshman year included a number of solid wins: Nebraska’s Dustin Williams, Michigan State’s Drew Hughes, and Minnesota’s Nick Wanzek, and it also featured gritty performances against some of his weight’s top standouts, an overtime loss to Wisconsin’s Isaac Jordan, and a 7-4 loss to eventual NCAA champion Vincenzo Joseph of Penn State. Close losses don’t do guys a ton of favors, but for the most part Gunther, who came out of high school unheralded, didn’t look overwhelmed and flashed a lot of potential.

The problem is, Gunther’s competition for the 174-pound spot is another wrestler who has shown flashes of potential. Coming off his redshirt year Young was 20-6 last season, with losses coming to teammate Marinelli, Missouri’s Connor Flynn (three times), NCAA qualifier Anthony Valencia of Arizona State, and CSU Bakersfield’s Lorenzo De La Riva (which he later avenged).

On the summer freestyle circuit Young added a pair of All-American honors, first at the UWW Junior U.S. Open where he was the runner-up at 79 kg. He would later earn an eighth place finish at UWW University Nationals, joining only Brandon Sorensen as Hawkeye All-Americans at the tournament. With both Young and Gunther making the move to 174 pounds, the early leader for the spot would likely be Young, who has a couple more solid victories on his resume at this point.

Redshirting at this weight for Iowa will be Colorado prep Myles Wilson. A two-time state champion in high school, Wilson was ranked in the top 20 of the 182 high school rankings by both InterMat and Flowrestling, but all signs point to him cutting down to 174 pounds. Wilson missed a portion of the summer due to an injury sustained at USA Wrestling’s Western Regional, but bounced back to earn All-American honors in both freestyle and Greco-Roman at Junior Nationals this summer.

It’s certainly an odd year in the state of Iowa, as UNI and Iowa State both added wrestlers from the Hawkeyes that could be potential starters on their new teams, but the Cyclones returned the favor as former Iowa State All-American Pat Downey looks to be a second semester factor for Tom Brands’ lineup.

With Sammy Brooks manning this spot for the last three years it was to very little surprise to see Cash Wilcke begin his career at 197 pounds for Iowa, where he was a NCAA qualifier and surprise round of 12 finisher in 2017. Many expected that following the graduation of Brooks that Wilcke would slide down to a more natural weight where he could look to start for the foreseeable future. That all changed with the addition of Downey, which will likely keep Wilcke up at 197 for one more year, while the Hawkeyes hope for an All-American finish from Downey.

His journey to Iowa has been a long one, but Pat Downey is hoping to finish his career in an Iowa singlet wrestling for Brands. There’s too much history to hash in a preview, so follow this link to read more on Downey’s story to Iowa. Suffice to say if Downey is able to complete his undergrad degree from Iowa State he could be a big points factor for Iowa come March. Obviously he will need to complete his ISU degree before he can enroll at Iowa, which is why he is listed as second semester only option for Iowa. A healthy, on the mat Downey can be in contention on Saturday night in Cleveland.

In the meantime look for North Scott standout Mitch Bowman to be the starter until Downey’s eligibility question gets answered. A year ago Bowman challenged Wilcke for the 197 starting spot (and he actually even wrestled heavyweight in a dual too), but his size disparity compared to the rest of the weight was definitely noticeable. Down at 184 Bowman will match up much better against his competition as he won’t be giving up the weight/strength factor.