Pat Downey to Transfer to the University of Iowa 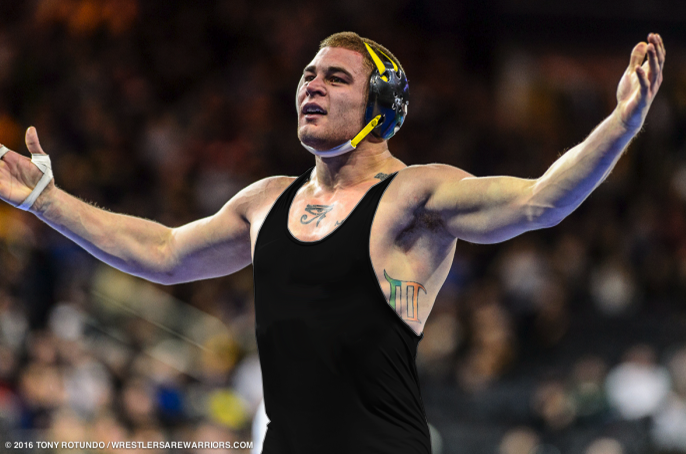 Pat Downey’s journey will have at least one more twist in the road as Trackwrestling’s Andy Hamilton is reporting that he will be joining the Iowa Hawkeye wrestling squad.

His story is well-known, but here’s a quick recap: Downey began his college career at the University of Nebraska before transferring to Iowa Central. After winning a NJCAA title for Iowa Central in 2015 he joined Iowa State program in the second semester as the Cyclones made their push to the 2016 postseason. At the time sophomore Dane Pestano looked to be a lock to qualify for the Cyclones at 184 pounds, which prompted Downey to move to 197 pounds. The move paid off as the Cyclones sent both men to the championships in New York City, with Downey taking fifth place honors at the higher weight.

Last season Downey moved back down to 184 pounds but was in and out of the lineup. Fast forward to mid-February, Downey was reportedly dealing with rib injury and saw little mat both in the practice room and in competition. Kevin Jackson removed Downey from the team in February due to violating team rules.

Since his dismissal from the Iowa State team last year, Pat Downey’s future has been a big topic of discussion. Specifically what school will Downey be competing for when the 2018 NCAA Championships roll around.

Now we finally have our answer. Downey will walk on at Iowa with the intent to wrestle at 184 pounds. According to Hamilton, the immediate plan for Downey is to finish his Iowa State degree online this fall, before enrolling in grad school in the spring and then joining the Iowa program.

“[Iowa] is the holy grail of wrestling, seeing first hand how they train and approach the sport. There are so many reasons why I want to go to Iowa.”

Downey will move to Iowa City immediately and start training with the Hawkeye Wrestling Club. He praised the club and it’s new coach Mark Perry.

“Mark Perry knows his stuff, I’m so excited to learn from him. I grew up watching him and loved his style. There are great training partners too in (Alex) Meyer, (Sammy) Brooks, and (Nathan) Burak. I have a bigger picture in mind too with my World and Olympic aspirations, and Iowa is the best place to achieve those goals.”

Unable to compete for the University of  Iowa until he obtains his degree from Iowa State, Downey intends to compete at some college opens during the first semester while wrestling unattached. Downey also told Hamilton he could compete in freestyle tournaments as well before officially joining the team.