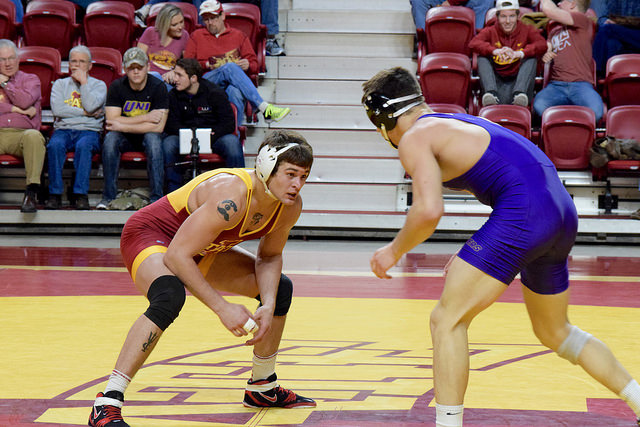 With the postseason now upon us teams will set their lineup for the final time as conference tournaments get under way next weekend (though the Pac 12’s tournament begins this weekend), it sounds as though Iowa State will be without one of their 2016 NCAA All-Americans.

According to current Iowa State head coach Kevin Jackson, Pat Downey has been removed from the team due to violating team rules.

“Patrick Downey is no longer a member of the Iowa State wrestling team because of repeated violations of team rules. He will no longer compete for the Cyclones, including this year’s Big 12 or NCAA Championships.”

It’s been a rough year for the Cyclones, finishing with a 1-12 dual record, which played a role in current head coach Kevin Jackson’s announcement that he would be stepping down from his role at season’s end. The Cyclones will head into the Big 12 Championships next weekend, March 4-5th in Tulsa, Oklahoma.

Downey began his college career at the University of Nebraska before transferring to Iowa Central. After winning a NJCAA title for Iowa Central in 2015, Downey joined Iowa State program in the second semester as the Cyclones made their push to the 2016 postseason. At the time sophomore Dane Pestano looked to be a lock to qualify for the Cyclones at 184 pounds, which prompted Downey to move to 197 pounds. The move paid off as the Cyclones sent both Pestano and Downey to the championships in New York City, with Downey taking fifth place honors.

This season has been a different tale with Downey moving back to his natural weight at 184 pounds. After competing in both of his team’s opening duals, Downey reportedly sustained a rib injury at the Cyclone Open in mid-November. Downey then made it back for three consecutive duals in January, with his last appearance being a 9-5 victory over Drew Foster of UNI. Since then Downey has been absent on the mat.