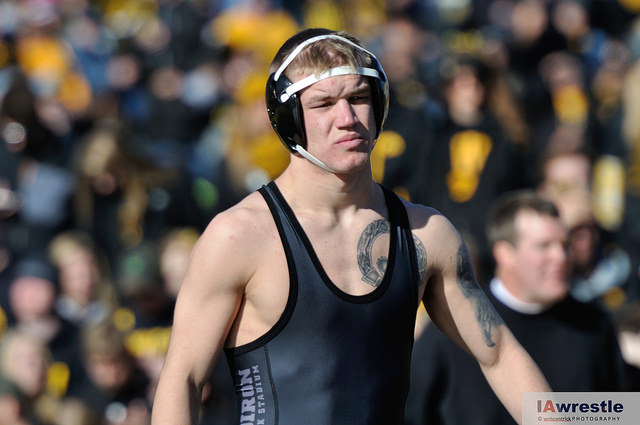 Former Bettendorf standout Logan Ryan is on the move according to Tony Hager, as the two-time Iowa high school state champion will be transferring from Iowa to Northern Iowa. Ryan left the Iowa wrestling team in December and . [UPDATE: Per Ryan, he has received a full release from Iowa, making him eligible to compete in both the 2017-18 and 2018-19 seasons. Without the release Ryan would have only been able to compete in what would have been his senior season.]

A top 100 recruit out of high school, Ryan came into Iowa in the same class as Seth Gross, with both projected to battle it out and be the future starter at 141 pounds. Ryan redshirted his initial season, compiling a 21-6 record at 141 pounds. By the start of his redshirt freshman year Ryan earned the starting spot for the Grapple on the Gridiron. He finished the season with a 2-4 dual record, and 6-5 record overall, ending his season in December.

We next saw Ryan take the mat this past season during his sophomore campaign up at 165 pounds – three weights higher than he started. He was 8-3 this past season, competing only at the Lindenwood and UNI Open events.

Overall the Panthers have two wrestlers listed at 157 pounds, and five wrestlers at 165 pounds expected to return next season, including 2016-17 starters Paden Moore and Bryce Steiert respectively.

UPDATE: With the release from Iowa, this will obviously give the Panthers even more depth at 165 pounds where Ryan competed last season, though with Steiert cemented at that weight, it wouldn’t be surprising to see Ryan make a run at 157, now that he is immediately eligible to compete.

One thought on “Logan Ryan Transferring to Northern Iowa (UPDATE)”