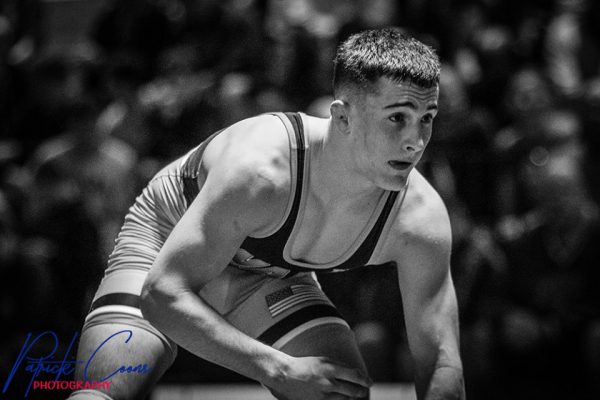 New Hampton’s Michael Millage might not show up on a search through the national rankings, but the soon-to-be senior has built his resume to the point that keeping him off those rankings will soon be a thing of the past. He showed up on Iowa high school wrestling fans’ radar when he won the 106 pound state title as a freshman for Crestwood, and since then has gone to wrestle in two more finals, returning the top of the podium this past February.

“It felt pretty good,” Millage said on winning his second state title after transferring from Crestwood to New Hampton this season, “It’s always great to get back what you just got short of. It was even better with the team I got now.”

The lone blemish for Millage at the state tournament was a tight 8-6 battle with Clarion’s Josh Portillo his sophomore year in the 2A 120-pound finals. A win at the tournament next year would mean Millage would be able to join two of Iowa exclusive clubs, the four-time finalist and three-time state champion clubs. While Millage will likely enter the 2017-18 season as a favorite, he still hasn’t given much consideration to where he will finish in his state’s history and instead is widening his goals to the national level.

“I guess I have never really even given it a thought. Once you win your first state title the goal is four (titles). I came up short, but won my second one so obviously the next goal is to win three state titles. Even looking past that I have never really broke through on the national stage yet and that’s one of my goals this summer. To go out to Fargo and put on a show.”

As far as what the future holds for Millage the New Hampton star wrestler stated his options remain open on where he will be headed after high school. In March he provided IAwrestle with a list of schools that had shown interest early in his recruiting process: North Carolina State, Iowa, Virginia Tech, Nebraska, UNI, and Minnesota.

After a month and a half, which included two unofficial visits, not much has changed, but he did mention that he had been talking to another school since our last update.

“Not really,” Millage said on whether or not his list has changed since his March interview on IAwrestle,” I have been talking to Iowa State a little bit. They can be thrown (in the list) too. I am open to anything.”

During our interview Millage also indicated that staying close to home wouldn’t be a factor, but what is at the top of his list is finding somewhere he believes he can achieve his goals.

It’s because of this that schools like Virginia Tech and NC State continue to pursue Millage. In fact one of Millage’s unofficial visits was to NC State after he wrapped up a medal winning performance at NHSCA Junior Folkstyle Nationals.

“It was pretty cool,” Millage said on his visit to NC State, “It was my second visit. I went to UNI and NC State now and it was kind of nice to see something out of state and see a college that you are not really familiar with and meet some new people. It was a pretty fun experience.”

Millage said he began talking with the NC State coaching staff this past fall and has been in contact with them ever since. When they asked him if he wanted to come and visit the school while he was already on the east coast it was just too good of an opportunity for Millage to pass up.

“I have been talking to coaches since Freakshow. And they asked if I wanted to come out and take a visit. Since I was going to be in Virginia Beach anyway I said yeah, why not. I was planning on visiting there anyway, but it was good.”

This summer Millage plans on competing at 132 pounds, which is up a weight class from where he won his state title this past winter. When it comes to where he sees himself in college, Millage said that 133 pounds is most likely, though that’s not necessarily set in stone.

“Right now the goal is 133,” Millage said on his future college weight,”Who knows if I will grow or I might even stay the same size. That’s always an option for 125 too.”

Fans can expect to receive a heavy dose as he looks to make an impact on the freestyle scene this summer.