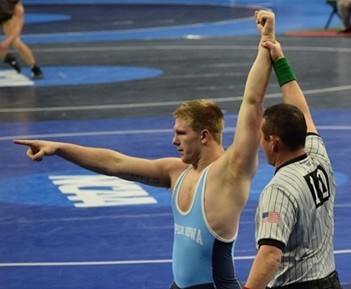 Session Three of the 2016 NCAA Division II Wrestling Championships may not have started the way that Upper Iowa had envisioned, but Jordan Rinken and Ryan Parmely won their final matches of the day to claim fifth place at 157 pounds and seventh place at 197 pounds, respectively.  The final two wins and bonus points from a tech fall by Rinken and a second Parmely pin pushed Upper Iowa into 16th place as a team with 19.5 points.

Rinken, who posted a 23-7 record in his final season with the Peacocks, lost a hard fought 4-2 decision in the championship semifinals to Terrel Wilbourn due to a reversal in the third period.  The Waverly, Iowa native then dropped an 11-4 decision to Matt Mincey of Minnesota State University, Mankato to fall to the fifth place match.  In his final match, Rinken got an escape in the second period and led 1-0 heading into the final frame.  He closed out his career on top and in control as he scored a two-point nearfall and three separate four-point nearfalls to earn a technical fall 15-0 over Matt Martoccio of Kutztown University.  The redshirt senior made the most of his final run this year and finished with a career record of 107-39 with 29 falls, 14 tech falls and 16 majors. Parmely, who closed out his first season on the mats for UIU with a 16-12 record, was leading 2-1 early in his consolation match against Joseph Brandt of Ashland, but late in the first period a takedown by Brandt led to a pin with just one second to go in the period.  Parmely could have let the sudden change in momentum affect his state going into the rest of his day, but the true freshman focused in prior to his seventh place match.  In that match, Parmely trailed Marcus Haughian of Colorado Mesa University 2-1 heading into the second period.  Haughian started on top and was looking for back points when Parmely was able to slip out of his control and pin his opponent’s shoulders to the mat at the 4:07 mark for his second fall of the championships.

The 4.5 team points scored by the pair in their last matches of the year pushed Upper Iowa out of a five-way tie for 19th place to stand alone in 16th.

St. Cloud State University and Maryville University are in the top two spots and will rely on the finals matches in Session Four tonight to determine the 2016 NCAA Champion.