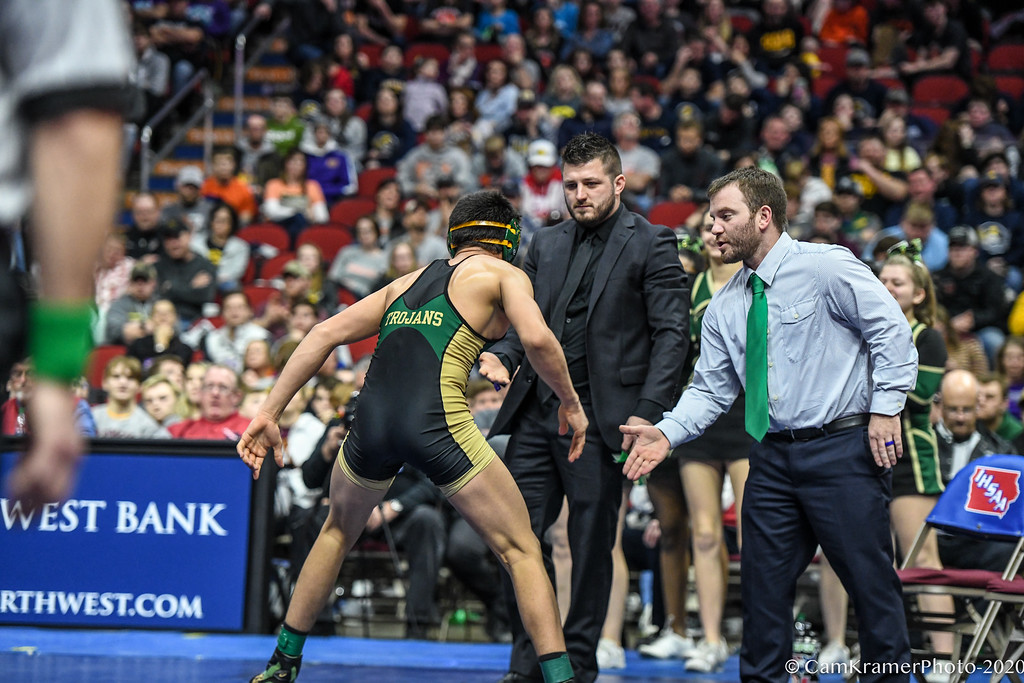 It was a big night for Iowa City West head coach Nate Moore, for several reasons. For starters, he was inducted into the Iowa Hall of Fame for his career accomplishments as a West high wrestler. In just his second season as head coach of the Trojans, Moore crowned his first state champion. Fittingly enough that wrestler, Hunter Garvin, was also Moore’s first-ever state finalist.

“It was great. Knowing how Hunter felt after leaving the arena last year and seeing him respond, get back on the horse, put the work in and get what he wanted this year was very satisfying for and for our coaching staff. I’ve been in his corner for as long as I can remember so it’s very fitting he is my first state champion.” — Moore

While Garvin will go down as Moore’s first ever state champion he was quickly joined by both Graham Gambrall and Will Hoeft, giving Moore a total of three state champions in year two. The positive news is that Moore returns both Garvin and Gambrall for 2021, Ashton Baker is a two-time bronze medalist, Grant O’Dell who made the podium, and Parker McBride is also a returning state qualifier.

Talk about running through a gauntlet, but Bondurant-Farrar’s Colby Lillegard put together a heck of a tournament defeating three ranked wrestlers on his way to his first state title. Lillegard had to go through both the top ranked wrestler, Dominik Ridout of East Marshall, and the second ranked wrestler, Nick Fox of Osage, to finish the podium on top. In his corner for the entire run was Matt Wonderlin.

“A year prior, Colby got pinned in the semifinals and I was heartbroken. Then having knee surgery in September and thinking his season might be over. Putting a medal around his neck was so awesome after what he went through. I will never forget that moment!” — Wonderlin

After nearly getting his first state champion in 2019, coach TJ Stuart was finally able to see one of his wrestlers land atop the of the podium on Saturday night after Sage Walker came away with the 182-pound crown in Class 2A. He was nearly beaten to the punch as EBF also had Trestin Sales in the finals at 145 pounds.

In Walker’s case, he dominated his way to the finals with two falls and a technical fall to set up the top ranked showdown between him and #2 Jackson Kinsella of Creston. It was a tight victory for Walker, but at the end of the day Walker put his name in the EBF record books with a 3-2 win.

“When I was in the corner for Sage it meant a lot to have gained the trust of an eventual state champion. It made me feel like I had done the things he needed to reach his goal. At the beginning of the year, we talked about his goals and almost every day after that we talked about what we have done today to reach that goal. The ending of last season has implemented into Sage that it’s important to battle for every point and through every position.” — Stuart

There was no sweeter moment for New Hampton-Turkey Valley coach Matt Paulus, who crowned his first state champion at the helm of the Chickasaw program when 195-pound  Evan Rosonke defeated Dylan Winkel of Central Lyon 10-5. It was a tremendous run by Rosonke, who had to defeat the weight’s #9, #4, and #3 ranked wrestlers on the way to winning his state title.

NH-TV has had a tremendous run of talent come through the program over the last five years, but it was great to see Paulus crown his first ever champion since his transition into the lead of the program.

“It means everything to me, but more importantly it means everything to this team and our community. This shows our athletes that they can continue to win at the highest level in this program. Now that we reached this milestone, we will work towards winning team titles. It was definitely a match I will never forget.” — Paulus

In Class 1A there was one head coach that for the first time saw one of his wrestlers end his tournament on top of the podium, and that was Ogden’s Jesse Sundell. Coming back to the program that he himself came through, Sundell had some big shoes to fill after Brian Reimers retired back in 2016. During his time Reimers won 353 duals and saw two of his wrestlers join Iowa’s four-time state champion club Jason Keenan and Sundell.

Now Sundell is looking to come full circle and lead the next wave of Ogden wrestlers. At the 2020 state tournament, he sat in the corner for his first ever state champion, Blake Haub.

“You always hear that this kid deserves it but this kid does. After battling through a tough loss his sophomore year and not to qualify for state and then injuries his junior year, it was an unbelievable feeling to watch him win the state title. Most kids go home after practice and don’t do much. Blake is doing chores on his family farm before school starts and after practice. Before the District tournament, he was doing chores before we left. After he won the District title he went back home and did chores for another two and a half hours. He works hard in the room and outside the room. That work ethic will make him successful at whatever he decides to do. It is satisfying to watch him mature on and off the mat and achieve his goals. He has set the bar pretty high.” — Sundell

If you want to talk about one fo the wrestlers that exploded onto the scene this season, look no further than Mickey Griffith who captured the 3A 170-pound title. In 2019 Griffth narrowly missed out on making the state tournament with a third place finish at the District tournament. Griffin rebounded in amazing fashion, with his first landmark moment a Cliff Keen-Independence tournament which propelled him immensely in the rankings.

By the end of the year, Griffith had evolved from the guy who missed out on the state tournament as a freshman to legit title contender. He answered the bell by dominating his way to a state title, which subsequently was Dustin Roland’s first.

“Having our first state champ was a very humbling experience. As I sit back and think about all the people who have played a part by work with, wrestling with, coaching, and just supporting Mickey and myself I can’t help but feel blessed beyond what I deserve. I am very proud of our coaches and the fact we were able to accomplish this for the school and the community.

For Mickey, it was rewarding seeing all his hard work paying off. The kid has lived the life in a way that has set him up for success that he achieved (in the finals).

Personally, I am proud that we were able to do this at the place I wrestled in high school and the same place that my dad led Lincoln to state softball titles (in 1999 and 2001). Obviously an individual title is very different from a team title, but both are state titles for the school that my family has been attending for three generations.” –Roland

Relatively new head coach Ian Alke saw his first wrestler reach the top of the podium, and it just so happens that Alke was in the corner for that wrestler’s brother just two years before as an assistant. This year it was Will Esmoil who claimed the 152-pound title in Class 2A, after coming within a win of winning a title as a junior. Prior to Will’s title, Alke was a member of the staff when Bryce Esmoil won titles in 2017 and 2018 for the Comets.

After coming in second to Humboldt’s Joey Busse in 2019, Esmoil came back with a vengeance in 2020, which included his grueling 3-2 finals victory against Sergeant Bluff-Luton’s Jack Gaukel, who is now a three-time state finalist.

“It was incredible, genuinely incredible. I am so happy for Will and honored to be a part of his growth as a wrestler and person.” — Alke

Much like Nate Moore, Centerville’s new head coach Jared Bevins not only crowned his first state champion last weekend, but he didn’t have to wait all that long for his second. Centerville placed three in the Class 2A finals spanning 126 to 138 pounds. Bevins first title winner was Matthew Lewis at 126 pounds, and the wrestler is now one title away from winning four. Shortly after that Kayden Kauzlarich won the 132-pound title, and he nearly completed the sweep but Nathaniel Genobana fell at 138 pounds.

The good news for Bevins moving forward is that both Lewis and Genobana return next season.

2 thoughts on “Coaches Crown their First Ever State Champion”