A Dozen Class 2A District Brackets to Watch 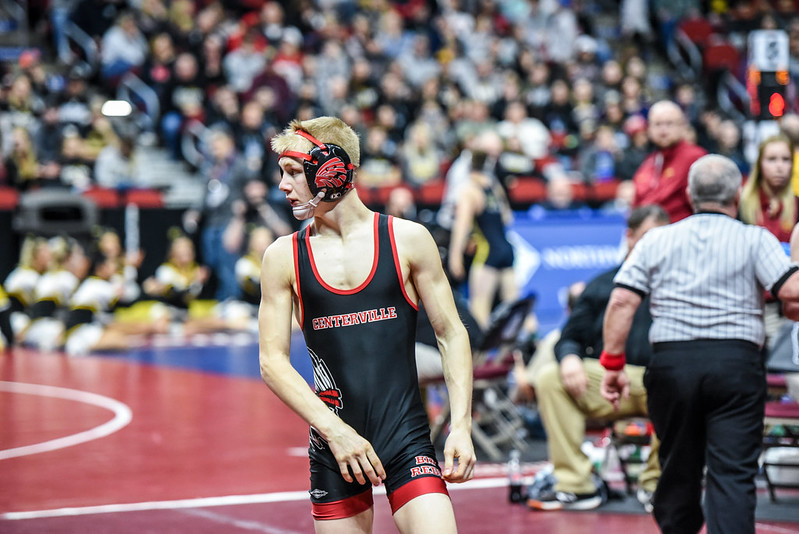 There are always some great district brackets around the state pitting multiple ranked kids against each other. Upsets always happen along the way and highly ranked kids don’t make it to Wells Fargo Arena for the state tournament. I’m always intrigued by the race for team trophies as well and how these qualifier tournaments have such a large impact on that race in Des Moines. Here are 12 brackets from 2A district tournaments that intrigue me for one reason or another.

Don’t let Nick Fox 6 losses fool you, this freshman is the real deal! He took a few losses early in the year but has been red hot lately, including a win over defending state champ and #1 ranked (at 113) Carter Fousek at regional duals. Cresten Craven has been having a great senior year out in Humboldt and has been climbing the rankings. He will be looking to punch his ticket to state after he feel short at districts last season. Don’t sleep on Brock Moore of Forest City though who has some really good wins this year and is dangerous. That semifinal match between Craven and Moore could be a fun one.

You might be wondering why I have included a bracket with no ranked wrestlers in it. It’s because all four of these wrestlers have been in the mix all year and seem to be pretty evenly matched. Weaver and Lemon are the upperclassmen and will battle it out in one semifinal. Weaver comes in as the sectional champ while Lemon lost to Bond last weekend. Jensen and Bond have both had really good freshman campaigns and will be names to remember over the next 3 years.

If you just look at rankings alone it appears that Mehlert and Nelson would be the guys here. However, Hovick has had a fantastic senior season as well and will have some say in this bracket. Hovick lost to Nelson in the sectional finals last weekend and now draws returning state place winner Lincoln Mehlert in his opening bout at districts. Mehlert missed the first half of the season with injury but has been battle-tested since his return against a really tough schedule.

Cael Ihle has been great all season long and led a very good Gilbert team. He will face a very stiff test in the opening bout against Hunter Worthen of Union. Worthen spent basically the entire season in the rankings until this last set. This was in part due to losing to Logan Arp a second time and Arp then jumping into the rankings. However, Worthen was able to reverse that outcome at regional duals on Tuesday night. There is a good chance that we could see Arp and Worthen meet up for a fourth time this season with a trip to the state tournament on the line.

Hansen has had a very strong freshman season and comes in ranked 10th in class 2A but having lost to Less last weekend at sectionals. Less has had an inconsistent freshman campaign but appears to be wrestling his best heading into the post season. Less has defeated Hansen and also defeated Guerrero twice this season. Galvan is a rare senior at this weight and brings a ton of experience and was ranked earlier in the season as well. Guerrero has quietly had a good year and maybe his biggest win came last weekend at sectionals when he defeated Galvan. He could also give Williamsburg a big boost with getting to Des Moines as they will be looking to earn a team trophy. Every match in this bracket should be very competitive and all are very capable of making the state tournament.

Cole Cremeens was a state place winner for Williamsburg last season and has had another great year. However, three of his five losses this year have come at the hands of Taven Rich and Carson Petlon who are both in this district. Cremeens will have to avenge at least one of those losses to get back to state. Rich and Petlon have both been highly ranked all year and have lived up to that hype. They have a combined three losses and they all have come head to head swapping victories. They could be on a collision course for the fourth time and it could have a big impact on state tournament seeding at this weight.

Wiederholt is a returning state qualifier who has been ranked all season. However, he will have to pull an upset to find his way back to the Well. Standing in his path are a couple of very highly ranked wrestlers in Matthew Lewis of Centerville and Brock Beck of Grinnell. Lewis is a two-time defending state champion who started the year at 120 pounds but hasn’t missed a beat since coming up a weight during the season. Beck placed 4th last season and is looking to become a 4-time state place winner. Neither Lewis nor Beck has lost in class 2A this season and this could possibly be a state finals preview a week early.

Any time that you have three ranked wrestlers in a district bracket you know that it’s going to be fun. Throw in another wrestler who has been close to cracking the rankings in a tough Kaeden Lozano and it should be great. Genobana comes in as a two-time state runner up and the highest-ranked guy here. However, he started the year at 126 pounds before being bumped up two full weights while Drake started the year at 152 pounds before coming down two full weights. It will be interesting to see how Genobana will handle the bigger guys and Thomas wrestled him to a hard-fought 3-2 win at sectionals. Thomas and Drake have not met this year but seem to be very evenly matched and that should be a fun one!

Trestin Sales is the only ranked guy in this bracket but don’t let that fool you. Bonnett was ranked recently and Rose and Haynes have been right there as well. Sales does own wins over both Rose and Bonnett during the regular season. Haynes hadn’t seen any of these other guys this year before getting the fall over Rose at sectionals. Any of these four is more than capable of getting hot and making the state tournament.

Rosonke comes into districts ranked second and should be considered the favorite as he has wins over both Kremer and Sindlinger this season. Kremer is the other ranked wrestler and has had an outstanding season. Kremer will have his hands full in the opening bout though with former state place winner Jack Sindlinger. Sindlinger is always dangerous and just outside the rankings this year. Rosonke beat Sindlinger in a VERY close match earlier in the season before stretching that out to a major decision at sectionals.

Rozeboom and Vande Weerd are both ranked as they into the district tournament and have split matches over the last couple of weeks. Rozeboom pinned Vande Weerd at the Siouxland Conference Tournament but Vande Weerd was able to reverse it and get the fall at sectionals. There is a chance we could see the third installment of this match and see some fireworks but standing in there way could be returning state qualifier Colby Wilmesherr of Bishop Heelan. Wilmesherr does have double-digit losses but most of those came to ranked wrestlers or out of state. Barclay could be dangerous too as he has split matches with Wilmesherr this season.

Dylan Jeffers placed 7th at 182 in last year’s state tournament and looks to make his way back onto the podium in his senior season. However, he will have his hands full trying to make it out of districts first. Seamus Poynton is a football star for the Solon Spartans and started the year at 195 before dropping to 182. He seemed to pick up steam as the season went on and might be wrestling his best as we get deeper into the postseason and he knocked off Jeffers at sectionals. Waltz could be a real wild card here and has put together a really good season. He comes in unranked mostly due to the fact that he hasn’t beaten any ranked wrestlers all year but he is definitely capable of coming out of this bracket.

2 thoughts on “A Dozen Class 2A District Brackets to Watch”