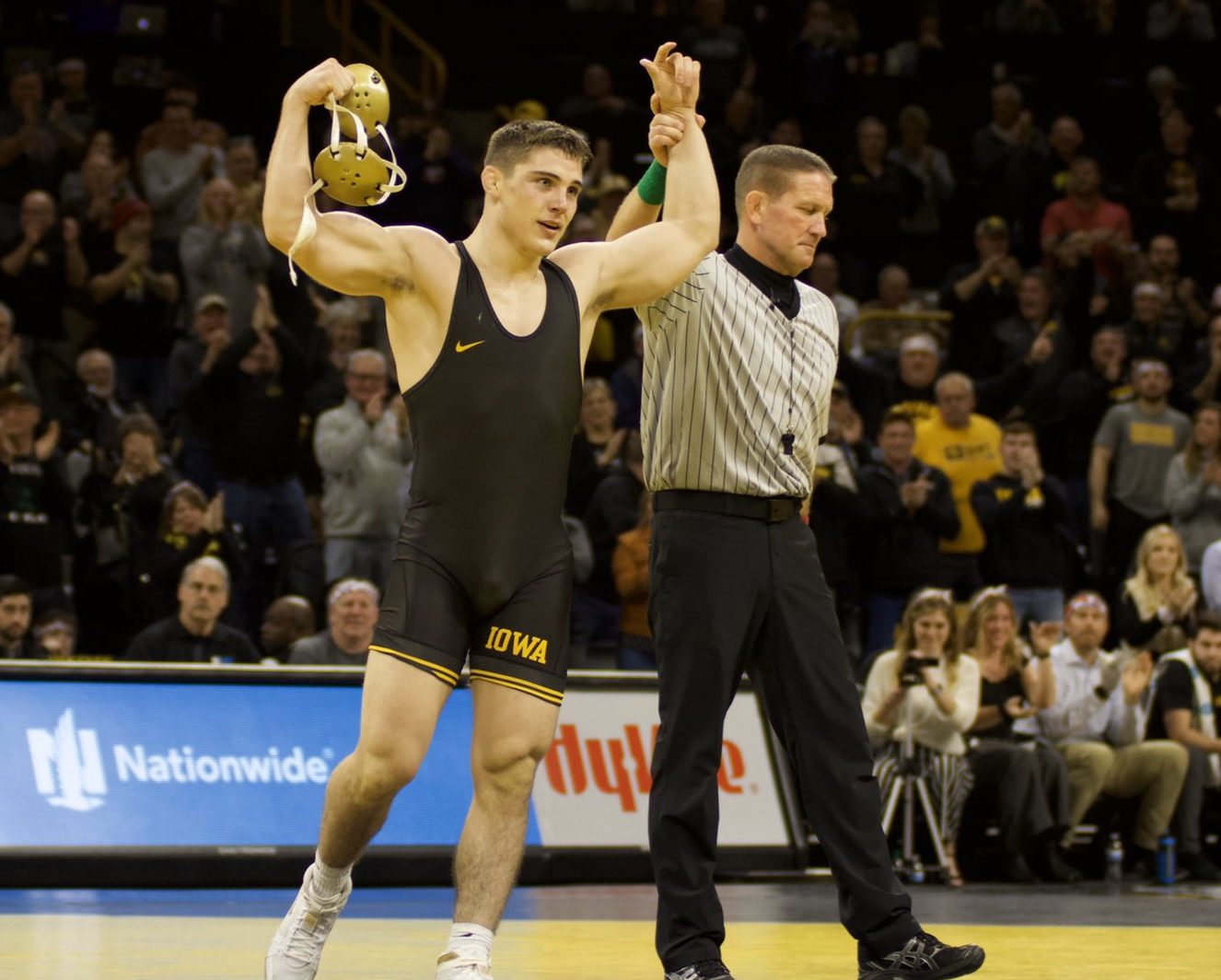 The Iowa Hawkeyes remained unbeaten in dual competition following their 26-6 win over #8 ranked Nebraska on Saturday night. It was a cold evening in Iowa, but there were still plenty of fans that made the trek to Iowa City as over 12,000 strong were in attendance for the top ten showdown.

The dual kicked off at 125 pounds with top-ranked Spencer Lee taking on Iowa native Alex Thomsen. Midway through the first period Lee was able to strike for a takedown followed by a four point nearfall tilt to jump out front 6-0. After an out of bounds restart Lee followed up three more four point turns to finish off the first period technical fall victory, 18-0.

In the 133-pound bout, Austin DeSanto came away with a 7-4 decision against Ridge Lovett. The Hawkeye junior came out strong with two first period takedowns and added a third takedown along with a point for stalling on Lovett to go up 7-3. In the third DeSanto took down and Lovett was able to ride the entire period to earn the riding time point.

Nebraska got on the board following the third match between Max Murin and Chad Red. The Husker wrestler scored a pair of takedowns in the first period to build a 4-1 lead, which proved too difficult for his Hawkeye opponent to overcome. With an escape and riding time, Red won by the final score of 6-2. It was also noteworthy that the Huskers picked up their second bench warning midway through the bout.

Iowa got right back into the win column in the next match when Pat Lugo took out Collin Purninton by the score of 4-1. Lugo scored a first period takedown and added points via escape and riding time.

The Hawkeyes had a close call at 157 where Kaleb Young took on Peyton Robb to close out the first half of the dual. Young got on the board first with a takedown in the first period and extended his lead to 3-1 with an escape in the second period. Robb managed to even the score with a takedown of his own. Young escaped to retake the lead, but Robb got an escape of his own to start the third period to square the match.

With time winding down in the match Young managed to get to Robb’s legs once again and finish with short time remaining to go up 6-4. He was then able to finish the ride out despite a number of roll attempts from Robb to escape from the bottom.

In the night’s highest-ranked head-to-head meeting it was #5 Isaiah White who struck first against #2 Alex Marinelli, notching a takedown with seconds remaining in the first period to go up 2-0. Marinelli responded with a second period rideout, and then got out quickly in the third period to cut the score to 2-1. He then followed with an immediate takedown to take his first lead in the match and locked riding time in his favor. The final score 4-3 after a late escape from White.

A close second for the highest-ranked head-to-head meeting was the very next match between #2 Michael Kemerer and #6 Mikey Labriola at 174 pounds. Neither wrestler was able to generate any offense throughout most of the match, with things tied at one point heading into the final 30 seconds. With both wrestlers trading offensive attempts late in the match Kemerer managed to score on a counter to score a takedown and win 3-1.

Making his Carver-Hawkeye debut was true freshman Abe Assad, who was faced with a stiff test in the #4 ranked Taylor Venz at 184 pounds. There were fireworks in the first period when Assad threw Venz in a headlock, but he threw the Nebraska wrestler too far through and Venz was able to roll through for the takedown. In the second period, Assad managed to tie the score with a takedown of his own. In the final period Assad added an escape and takedown to secure the upset 6-4.

The Huskers won their second upset of the evening at 197 pounds where #14 Eric Shultz took down #4 Jacob Warner in the closing seconds to win 3-1. Prior to that, the only scoring in the match was a pair of escapes.

The dual closed with the ninth straight ranked head-to-head match with Tony Cassioppi taking out Christain Lance. After a scoreless first period, Lance got an escape, but Cassioppi got right in on the legs to take his first lead in the match.

Up next for the Hawkeyes will be a continuation of their brutal homestretch when #5 ranked Ohio State comes to town next Friday. The Hawkeyes will then close out the month of January with their third straight top ten ranked team, #3 Penn State.