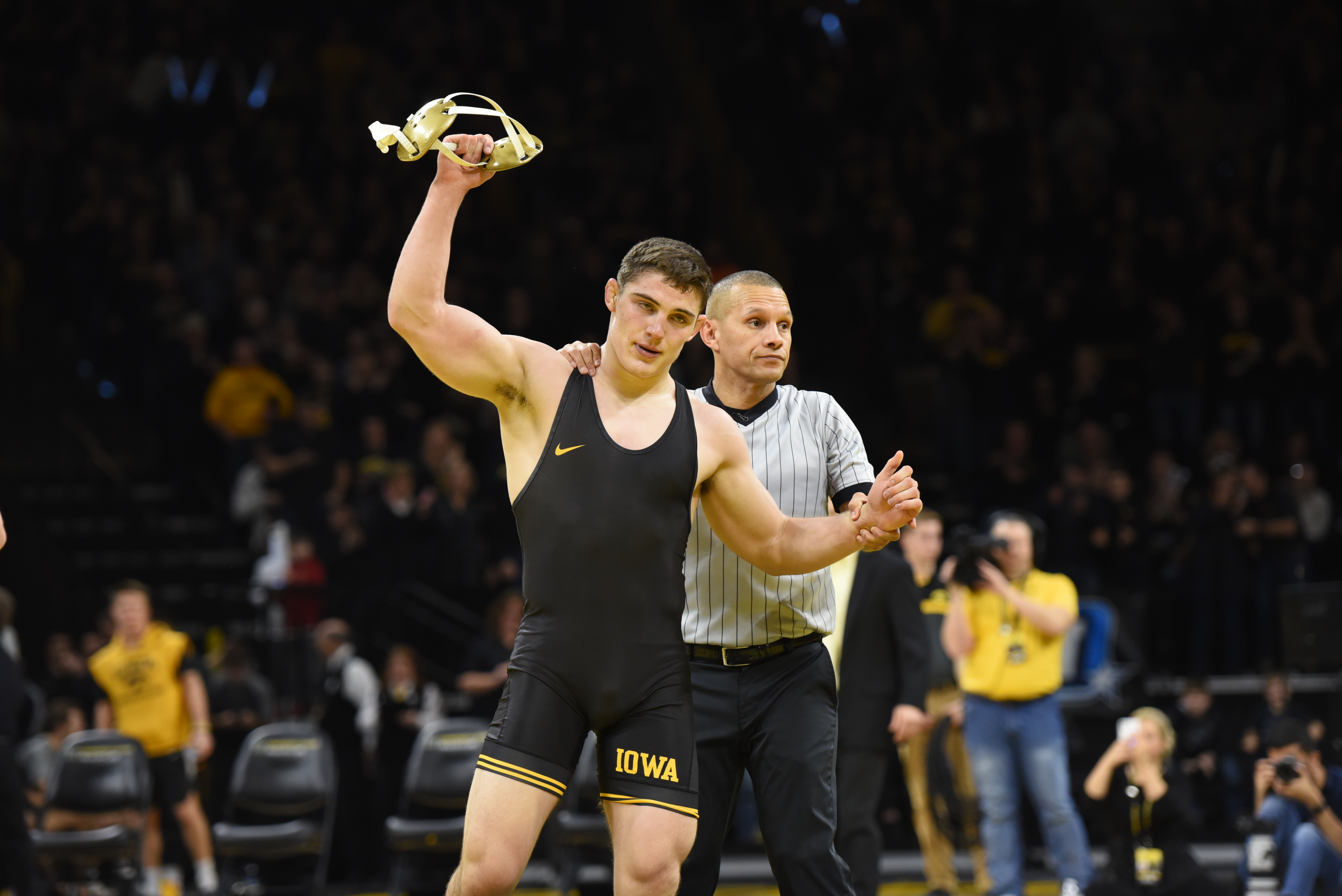 The Iowa Hawkeyes were able to answer the call as another top ten team came calling, this time the team walked away with a 24-10 win over the #5 ranked Ohio State Buckeyes. There were several unanticipated changes for the dual, both of the team’s regular starters at 197 and 141 pounds did not take to the mat in the dual, though it ultimately did not have a significant impact on the dual’s final outcome.

Things started off in the meatier part of the lineup with Alex Marinelli being the first Hawkeye to take the mat against Ethan Smith at 165 pounds. The Bull charged out to three takedowns against Smith in the first period, but Smith was able to get one back late in the first to make it 6-5 score in favor of the Hawkeye heading into the second. Marinelli was able to build his lead back up with an escape and takedown to start the final period up 9-5.

Marinelli tacked two more takedowns on in the third, and once again Smith was able to nab one of his own to close the gap. The final score of the match was a 14-10 decision for Marinelli.

In the first of two top ten head-to-head matchups featured Michael Kemerer taking on the rising Kaleb Romero at 174 pounds. It was Kemerer that struck first getting an early takedown and proceeded to ride for over two and a half minutes. In the second Kemerer got a quick escape and hands to the face call had the Hawk up 4-0 after the second period. He added one more takedown in the third period but was unable to push the match into bonus territory, ending the match with a 7-1 win.

There was some late match dramatics in the 184-pound bout between Abe Assad and Rocky Jordan. With the score tied at one point each in the third period Jordan got in on Assad’s leg, Assad was able to break the grip and come around and grab Jordan’s leg to force a takedown of his own followed by a ride out to take the match 3-1.

We did not see the top ten battle between Jacob Warner and top-ranked Kollin Moore at 197 pounds, instead the Hawkeyes sent out senior Cash Wilcke to return to the weight he manned as a freshman and sophomore. Moore proved to be too much for Wilcke coming away with a 9-3 decision, and putting the Buckeyes in the win column for the first time of the night.

In the battle at 285 pounds, freshman Tony Cassioppi came away with a 9-3 decision against Gary Traub. He started out with a pair of takedowns in the first peirod to go out front 4-1. Traub nearly earned a second-period rideout, but Cassioppi was able to slip his hold with less than five seconds remaining to get out. In the final period, Cassioppi landed another takedown with a body lock and picked up two nearfall points in the process.

Spencer Lee was his usual, dominant self in his match against Hunter Lucas. The Hawkeye junior picked up yet another first period technical fall, racking up multiple nearfall turns to terminate the match.

At 133 pounds the Buckeyes struck first as freshman Jordan Decatur got a quick takedown against Austin DeSanto. The junior All-American battled back with three takedowns to go up 7-4 into the second period. There DeSanto was able to pour it on with a takedown barrage in the second period to lead 18-8 going into the final period. The match ended quickly in the third period when DeSanto continued his high octane pace to win 27-12.

Getting the nod at 141 tonight was junior Carter Happel in place of the top ten ranked Max Murin. He was tasked with taking on the Buckeyes other top-ranked wrestler, #1 Luke Pletcher. It was a match that was entirely controlled by the Buckeye wrestler, with Pletcher coming away with a 14-5 major decision.

In the match of the night was the 149-pound meeting with Iowa’s top-ranked Pat Lugo taking #6 Sammy Sasso. The two ended regulation tied at 1-1, but Lugo was in on a number of shots, and Sasso displayed an impressive level of flexibility to create scramble situations to get out of giving up a score. With short time remaining in regulation, Lugo nearly had the winning score called, but the refs ultimately overturned their original ruling to send it to sudden victory.

In sudden victory, Lugo looked to have locked up a cradle which would have given him the winning score, but after an Iowa challenge, that too was not counted. In the tiebreakers period, Sasso was able to score a quick escape and while Lugo was not able to get out the refs once again had to head to the monitor, this time to check for a locked hands call, but the call wasn’t there in Lugo’s favor. A 2-1 win for Sasso.

The final bout of the evening Kaleb Young took a controlled decision from Elijah Cleary winning 4-1.

Up next for the Hawkeyes will be another tough test at home when the Penn State Nittany Lions invade Carver-Hawkeye for another top ten dual meeting. There will be no rest for the weary as they have a road contest two days later against Michigan State that same weekend.