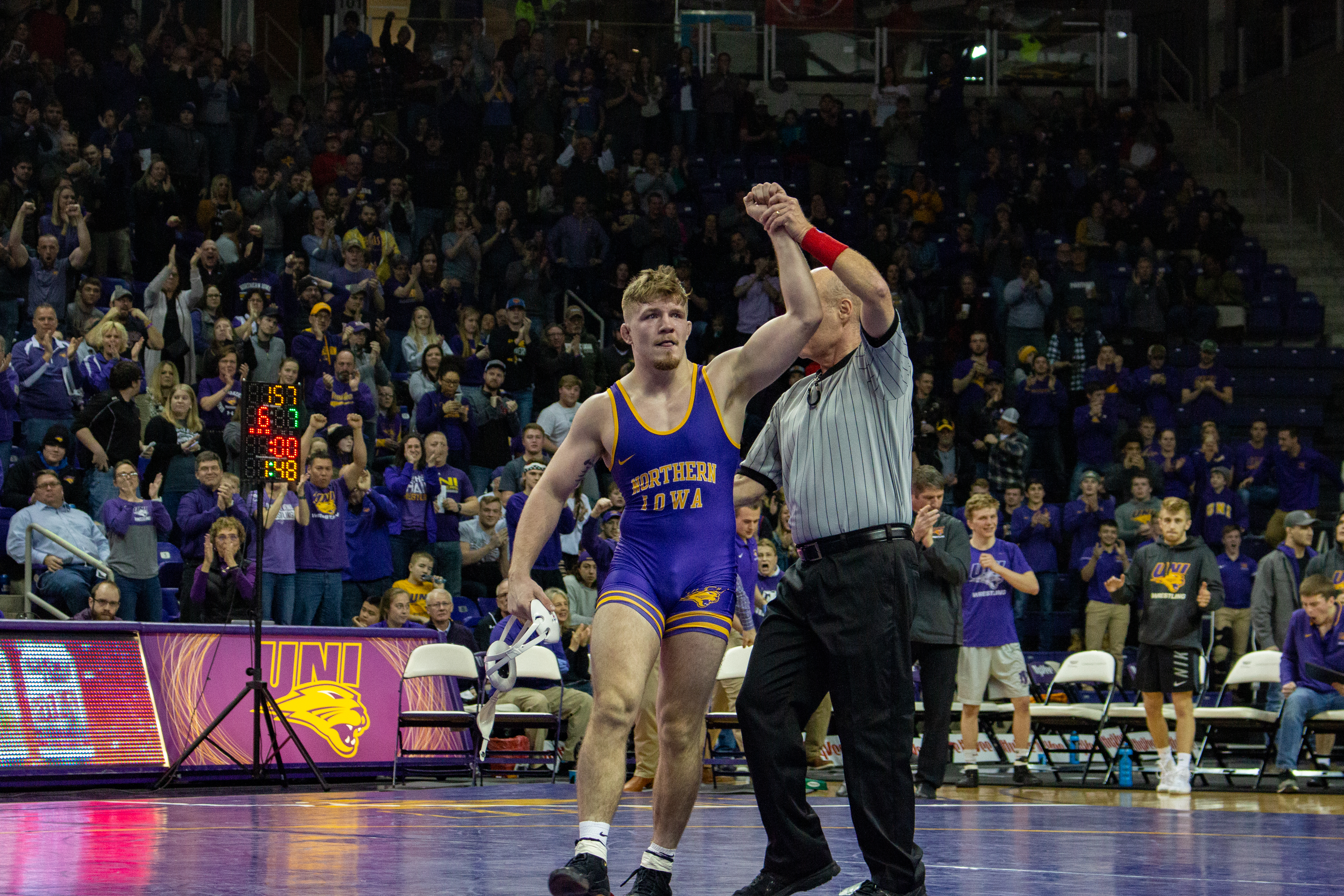 The dual started out with a bit of a surprise, though not a win for UNI as Jay Schwarm lost by three, 9-6, to #4 Nick Piccininni. Schwarm scored the first points of the match though and rode Piccininni tough throughout, and a lesser opponent probably would have gone over to another Schwarm pin.

UNI scored their first upset of the night when Jack Skudlarczyk won 10-5 over Reece Witcraft. Unlike Schwarm, Skudlarczyk gave up the first points of the period, but then used a four point nearfall in the second to propel him to six more in the third for the win.

Michael Blockhus won a close decision, 4-3, over Dusty Hone. After taking down Hone in the first and going into the third tied at two, he reversed Hone and held on for the win to give UNI it’s first lead of the night.

Then the biggest upset of the night came, as Keaton Geerts, semi-regular starter at 157, came out to take on OSU’s Wyatt Sheets. Geerts scrambled into – and out of – a few takedowns in the match, and wound up with holding Sheets off at the end for the 8-6 win. It really doesn’t do the match justice saying Geerts “scrambled” because it was really a lot more than that. If you can you should go watch it.

A pair of major decisions came for each team coming out of the break. Austin Yant fell 14-5 to #9 Travis Wittlake, giving OSU a brief lead, but Bryce Steiert got things back on track for UNI with a 13-2 win over #12 Joseph Smith in Smith’s first action since the Southern Scuffle. The Panther never let Smith get into the match, taking him down with ease and putting on a punishing ride.

At 184 Taylor Lujan won 4-0 in a match that never felt out of his control. He has a takedown in the first and used an escape and rideout in the third to seal the win.

OSU brought the dual back to within one point as Dakota Geer won by tech fall, 20-4 over Noah Glaser. But then Carter Isley came out for UNI and took down the smaller, lighter, Austin Harris.

With no points in the first and only a Harris escape in the second, Isley put together a pair of takedowns in the third to get the 5-2 win and secure the 19-15 win for the Panthers.

UNI will next be in action next Saturday night as they travel to Oklahoma for a dual with the Sooners.