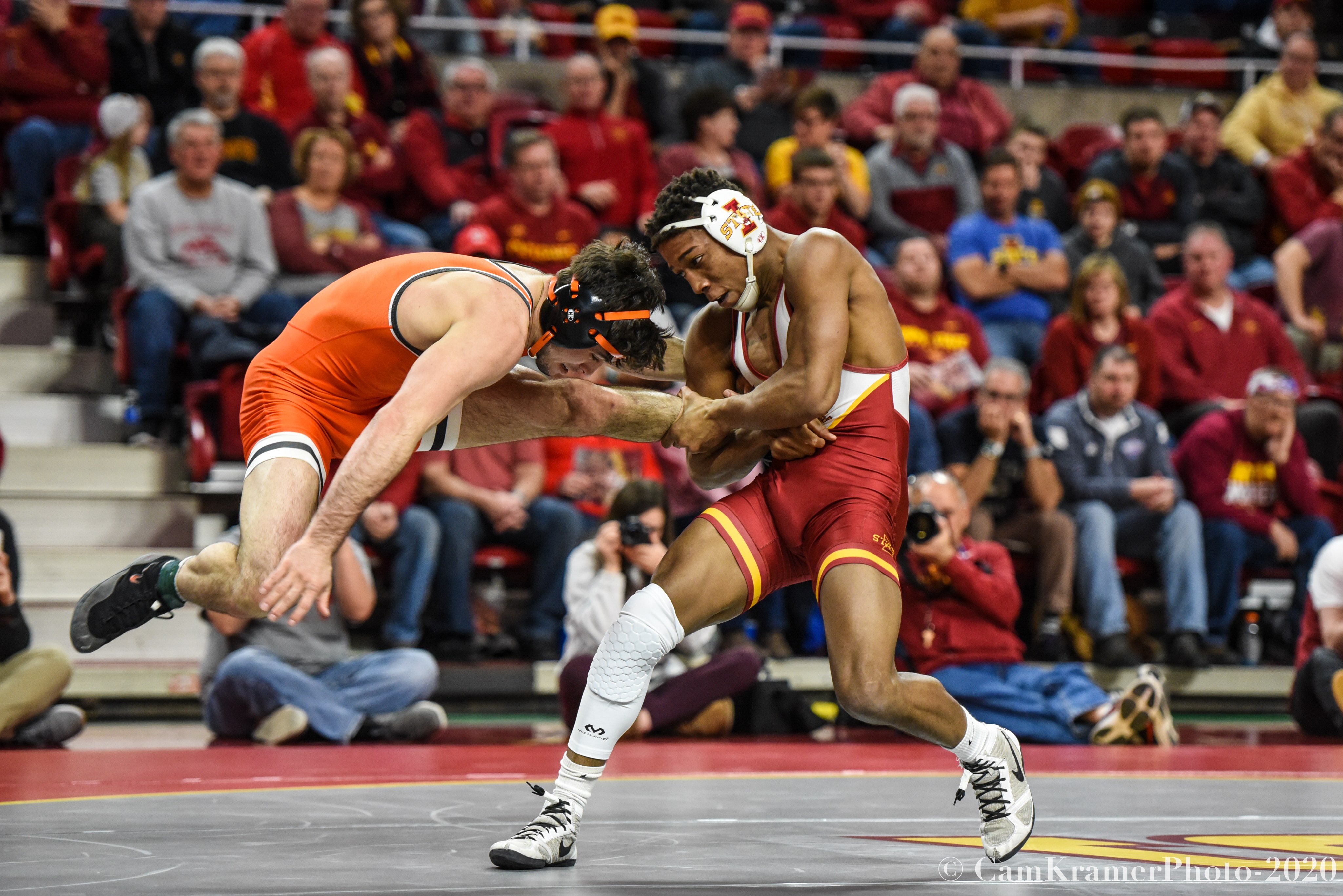 The Iowa State Cyclones dropped their first conference dual of the year as the Oklahoma State Cowboys came into Hilton Collesium and took a 23-9 victory from the host school. Iowa State was hoping to channel some upset magic against the Cowboys, who were coming off a loss to Northern Iowa, which was their first loss to the Panthers in nearly 29 years.

Starting things off was a bonus point victory for the Cowboys after All-American Nick Piccininni picked up some late points to give his team an extra point in the team score. In the first period, Piccininni scored a takedown and tilt to go up 4-0 and then had a similar situation in the final period for the bulk of his scoring. All of Mackall’s points came via escape.

Oklahoma State followed with an upset at 133 pounds where Cowboy Reece Witcraft used a late third-period throw to put the match in his favor for good. The bout opened with both Witcraft and Todd Small getting takedowns. In the second Small pulled ahead with an escape and two takedowns to carry a 7-4 lead into the third. There Witcraft got an escape and threw Small to his back for two nearfall points which carried him to his 9-8 victory.

During the match, both Iowa State and Oklahoma State were docked one team point for control of the mat area.

The Cyclones were able to get on the board after a 5-1 showing from Ian Parker over Dusty Hone at 141 pounds. With over four minutes of riding time, Parker controlled the entire match with his two takedowns and strong riding ability.

The Cowboys responded with a 13-1 major decision from Boo Lewallen over Ryan Leisure at 149 pounds. The Cowboy jumped out to an 8-0 lead after the first period.

Iowa State then responded with another win from David Carr over Wyatt Sheets at 157 pounds. The Cyclone freshman came out with three first period takedowns, though escapes and a locked hands call kept the match at a two point margin heading into the next period. Carr continued his takedown onslaught over the remainder of the match to finish with a 14-6 major decision. That left the dual at 10-6 heading into intermission.

After the break, the Cowboys picked up a 9-4 decision from Travis Wittlake against Chase Straw at 165 pounds. This setup a run of Cowboy wins that put the dual officially out of reach.

The Cowboys earned their second upset of the day at 174 pounds when they sent out #12 Joe Smith to face #11 Sammy Colbray. The match was tied at 1-1 in the third period before Smith was able to add two takedowns to take the match 5-2.

It was a tight match between Marcus Coleman and Anthony Montalvo heading into the final period with the Cowboy leading 1-0 after a rideout and stalling point against Coleman. In the final period Montalvo got an escape and two takedowns to end the match 6-2.

Iowa State looked like they had upset potential at 197 when Francis Duggan came out and scored the first takedown against Dakota Greer at 197 pounds. The Cowboy wrestler responded with one of his own to end the first period up 3-2. Things got out of hand from there as Greer ended with a bonus win, 21-8.