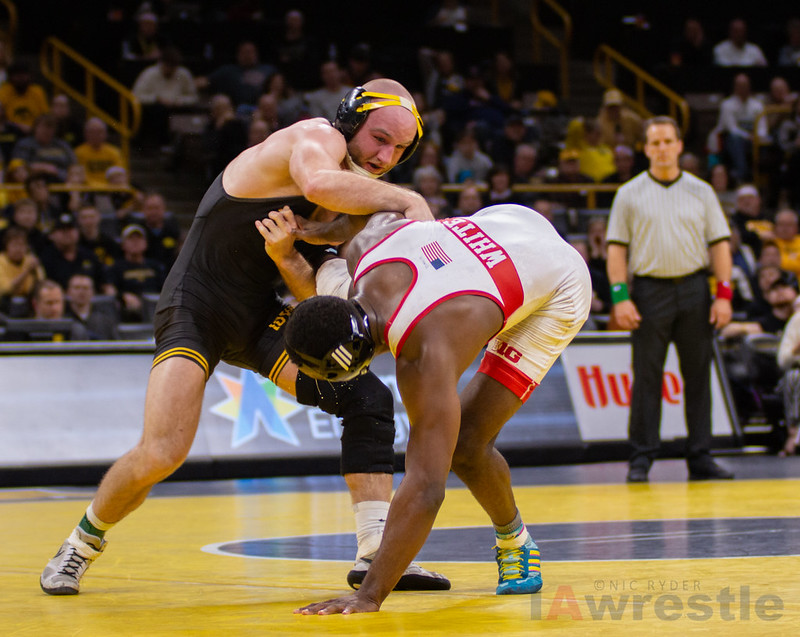 Another weekend, another televised dual for the Iowa Hawkeyes. Last weekend the Hawks picked up a 26-6 dual victory over the #8 ranked Nebraska Cornhuskers and this weekend they will be up against the #5 ranked Ohio State Buckeyes. Just like last weekend, this dual will also be featured on the Big Ten Network.

The Buckeyes come into this dual with a perfect conference record, and their only dual loss came to ACC power Virginia Tech back in November. This Ohio State squad has seen some changes since the start of the year, pulling the redshirt on one of their true freshmen, and bumping up a pair of starters.

Top-ranked Spencer Lee will look to continue his scorching start against Buckeye sophomore Malik Heinelman. To date, Lee has won all of his matches by bonus, and all but one of those have been of the match terminating fashion – either fall or technical fall.

Following his close win over Husker wrestler Ridge Lovett, All-American Austin DeSanto will be matching up with yet another true freshman in Jordan Decatur. This was one of the surprise moves made by the Buckeyes this season when they pulled Decatur out of redshirt to take over the 133-pound slot for Quinn Kinner (who is now listed in Ohio State probable lineups at 157).

One of the bigger matches will be the bout at 141 pounds where the Buckeyes feature a top-ranked wrestler in Luke Pletcher and Max Murin who is coming off his first loss of the season. Coming into last weekend’s match Murin had not surrendered a takedown on the year, but he gave up two in the first period to All-American Chad Red. If Murin can return to form he will be in the conversation of nabbing an upset of his own this weekend.

Another match to circle will be the 149-pound bout between Pat Lugo and Sammy Sasso. Despite coming in ranked number one in the country, Lugo enters with a 0-1 record against Sasso, taking a 6-4 loss in Sudden Victory at last year’s Midlands. The Hawkeye senior has looked to be a man on a mission this season, and if he manages to avenge a prior loss it will only strengthen the conversation about his title chances this year.

As mentioned before after pulling Decatur’s redshirt the Buckeyes’ previous starter at 133 has begun to show up in Ohio State’s probable starters at 157 pounds. The team’s regular starter has been Elijah Cleary, who is coming off of a solid win over Eric Barone of Illinois.

Hear our breakdown of this dual on the latest episode of the Potentially Dangerous Podcast:

Following a close win against his Nebraska opponent, Alex Marinelli will enter this weekend’s contest as a comfortable favorite against Ethan Smith at pounds. Smith at one time was an Iowa State signee, but reopened his recruiting after Kevin Jackson was relieved of duties.

This weekend will be Michael Kemerer’s third straight top-ten opponent (and spoiler alert he is scheduled to face the nation’s #1 ranked wrestler next weekend). The Buckeyes Kaleb Romero has slowly climbed into the rankings and enter’s this weekend’s contest with just two losses on the year.

After notching a win over a top-five opponent in his Carver debut Abe Assad will look to continue his strong start to his varsity career against Rocky Jordan. Since his redshirt was pulled the true freshman is 3-0 and is coming off potentially the biggest win in his career. If it wasn’t clear before, it should be now, that when Tom Brands decided to pull Abe Assad’s redshirt it was because they truly saw something special in his potential.

Coming off an upset loss will be sophomore Jacob Warner, who lost a last-second match to Nebraska’s Eric Shultz last weekend. Coming into the match Warner was 2-0 against Schultz, but Warner was unable to generate any offense in their most recent meeting and gave up a late takedown, which dropped him from being ranked second in the country. It will be a tough turnaround for the sophomore as he will face the nation’s #1 ranked Kollin Moore on Friday night.

Last, but certainly not least is Tony Cassioppi who continues to impress in his freshman season following another ranked win against Nebraska. Cassioppi has stated his intentions for wanting to take his place in Iowa history by going after the all-time pin record and to date he’s scored five falls. He has a perfect record over scoring a bonus win against non-ranked competition.