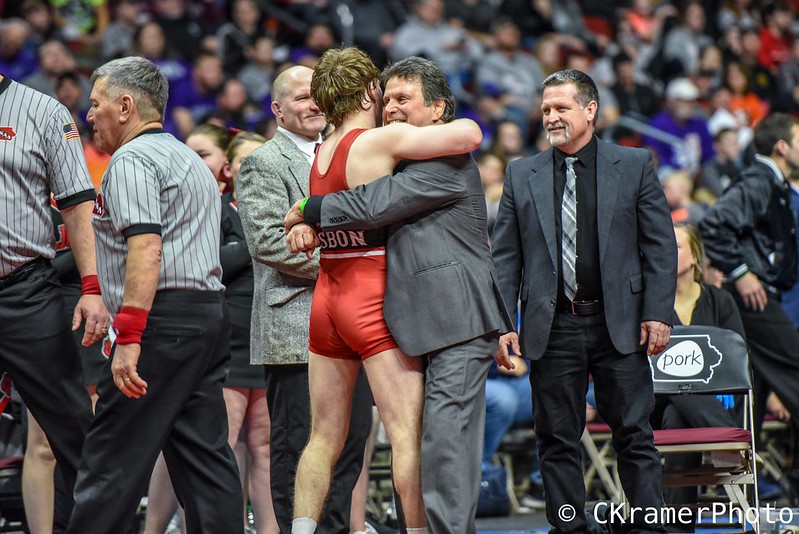 History has been made. Lisbon head coach Brad Smith is officially the state’s all-time dual wins leader after the Lion’s 81-0 shutout of Maquoketa Valley tonight in Winthrop. Smith extended his streak with a 76-0 win over East Buchanan.

Its been a storied career for Smith, who has amassed his career record split between Lisbon and Iowa City High in a career dating back to 1979. He began his career with a 142-40 record with Lisbon before moving to City High in 1992 where he won an impressive 346 duals. Smith returned to Lisbon in 2013 where he has since won 133 dual to claim the all-time mark. He overtakes Logan-Magnolia legend Kent Kersten, who began coaching the same year as Smith, but retired in 2017.

Unsuprisiginly, Smith’s career includes more than just dual victories as he had led 12 teams to a state title – nine at Lisbon and three at City High. That total puts him just ahead of Legendary coach Bob Siddens of Waterloo West who has won 11 titles.

Smith has also helped lead numerous individuals to the state podium and has been in the corner for many Saturday nights. He was there in 1980 when Lisbon got their first-ever four-time state champion Scott Morningstar and was present for all four of Shane Light’s titles from 1987-90. He had a hand in half of Jeff McGinness’s titles from 1992-93, and he returned to Lisbon in time to help coach Carter Happel to his four titles dating from 2013-2016.

This winter he could potentially see his fifth wrestler win a fourth state title under his leadership as Cael Happel leads the rankings at 138 pounds. His resume could be further bolstered by sophomore Robert Avila Jr, who was a state champion as a freshman and is without question the favorite to repeat, this time at 132 pounds this February.

While Smith has been at the helm for multiple state championship squads and been in the corner for dozens of our state’s all-time best wrestlers there is no question that Smith has impacted the lives of all of his athletes over the years. It’s easy to point at his top performers and see how successful he has been at a coach, but his longevity in the sport speaks to there being more to his success than just those written in our history books.

There is something to be said about a coach that can build sustained success by developing his homegrown talent. It’s been a pleasure to witness and cover Smith’s run and we look forward to watching him potentially add to that legacy.