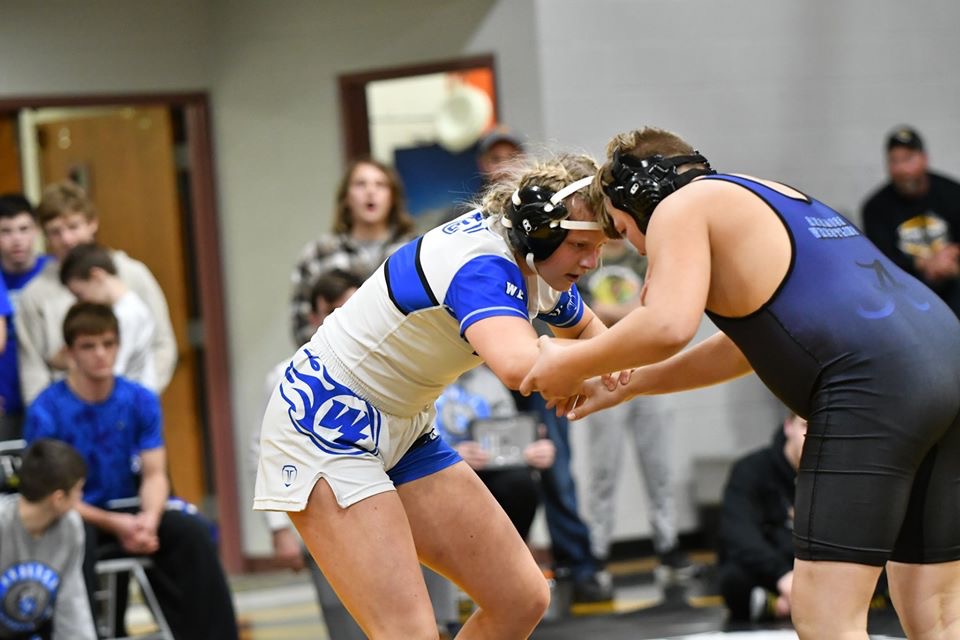 Since many of the brackets vary in size and there are not too many matches in the Round of 64 (love seeing these huge brackets this year!). So I am going to focus on mostly Round of 32 matches to watch on Friday night. It’s extremely difficult to single out “just a few” matchups to watch for with the field more than quadrupled from last year, but these seven should be doozies.

Starting at 106 pounds we have two newcomers to the IWCOA Girls State tournament, Abby Blint and Ashley Bjork. Blint comes in with an 8-4 record against the girls this season. She also has wrestled some at the varsity level for Mount Pleasant. Bjork has been one of the standouts for the new Decorah girls program. She comes in with a 6-3 record and all of her wins were by bonus points (five by fall).

The 2019 IWCOA Girls State 113 pound bracket had seven wrestlers, in 2020 it has thirty-six! Elizabeth Oleson enters the tournament with a 13-12 season record. An astounding eleven of those wins were by fall. Her adversary to start Friday night will be, Cali Koppes. Nine of Calie’s ten wins this year have come by fall. Both girls have wrestled a lot of matches this season and we should see some definite fireworks in this one!

Rylee Vercande, ranked No. 7 at 126 pounds, finished fifth at 132 pounds at ‘19 IWCOA Girls State. This year Rylee’s down at 120 pounds and sports an 8-6 record. Don’t sleep on Emily Voyna, who is a reigning AAU State champion and has also beaten Elizabeth Oleson by fall this season.

Go Hawk vs Go Hawk goes down at 126 pounds. For that reason alone this is a good matchup. Kailey Hervol has an 8-3 record, seven of those were by fall. Checking in with a 7-5 record is Cailey Reyna. Cailey’s wins by fall ratio is 100 percent. With a combined fourteen falls, this has all the makings of, must see.

132 pounds has a staggering 49 wrestlers in it. To pick one matchup to watch was excruciatingly difficult. Junior, Naomi Gaede, has double the number of wins over losses with a 6-3 record heading into Friday, five of which are by fall. Bri Neuhaus, is the second Anamosa girl on this list and she has provided plenty of fireworks of her own. She has eight falls on the season en route a 9-4 record.

I know this a recurring theme, but it needs to be mentioned…over and over. In ‘19 the 138 pound bracket had nine girls, now in ‘20 it’s ballooned to forty-two. No. 9 at 132 pounds, Kennadi Colbert comes in with an .833 win percentage. Kennadi’s only loss on the season is to, No. 6 Lilly Luft. Her opponent, Saida Komjo brings a 4-2 record to Waverly this weekend; three of the four by fall.

No. 6 ranked, Makayla Mostek, could be in the mix to win the 145 pound state title. She finished third a year ago and has only taken two losses this year out of her eleven matches. Standing in her way is newcomer, Isabel Morrison. Morrison is in her first year of wrestling but is a good athlete with good bloodlines as her father Chad was a high school state champion. She comes into the state tournament with a 5-3 record, going five for five in the fall department.

Maddy Buffum comes in as the top-ranked 152 pounder in the state. Maddy’s undefeated on the season and the second seed in the bracket; largely in part to her runner-up finish in last years IWCOA Girls State tournament. Playing the role of spoiler will be 9th ranked Virginia Cacho of Muscatine. Cacho’s most notable win came against Isabel Morrison, where she came away with the 7-2 decision.