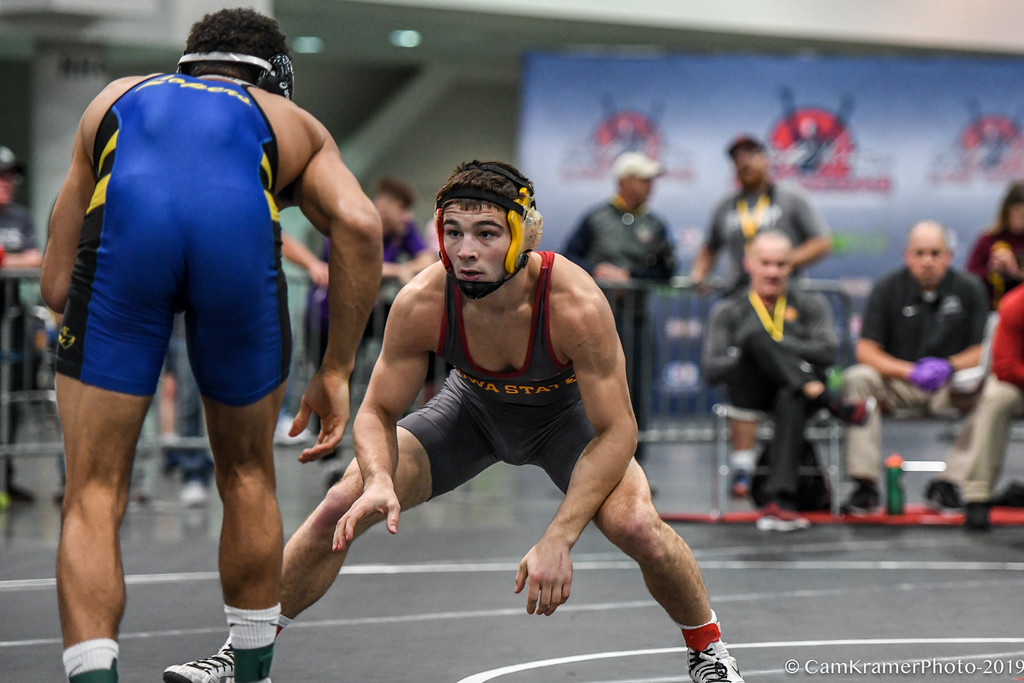 The Iowa State Cyclones got back in the win column against a really tough South Dakota State squad on Friday night. The team fell behind early to their conference foe but managed to string together four straight wins to take the lead in the team score. After trading wins in the last four matches the Cyclones managed to come out on top 22-17.

The dual began at 184 pounds where sophomore Marcus Coleman was tasked with taking on the #14 ranked Zach Carlson. The Jackrabbit wrestler managed to go out front 2-0 early and never let go of his lead. Carlson added three points in the second and third periods to take a major decision from the Cyclones.

In the battle of Iowa natives, it was SDSU’s Tanner Sloan that came away with a 10-2 major decision over Joel Shapiro at 197 pounds. Sloan started things off with a first period takedown and maintained his lead throughout the match.

The Cyclones got on the board after Gannon Gremmel’s 4-3 decision at heavyweight. The match was scoreless after the first period and an escape by Blake Wolters put the Jackrabbit wrestler up 1-0 after the second period. Gremmel then mounted a third-period comeback and picked up a late takedown to pick up the win.

With the team trailing in the team score there looked to be a lot more on the line at 125 pounds other than the ranked head-to-head meeting. The match started with an Alex Mackall takedown against Danny Vega which led to the Cyclone leading 2-1 after the first period. In the second Mackall managed to reverse Vega and pin the former Iowa State wrestler in the second period. The win pushed ISU out front in the team score for the first time on the night.

Closing out the first half was a controlling performance from Todd Small over Iowa native Zach Price to win 11-4. The Cyclone wrestler scored two takedowns in the first and third periods, and one in the second for his 11 point tally.

Keeping the momentum rolling in the Cyclones’ favor was 141-pound wrestler Ian Parker, who took out Clay Carlson 8-2 in a match that was in hand from the first whistle. Parker led 5-0 heading into the third period with riding time advantage, before adding another score in the final period.

In the second and final battle of Iowa natives, Ryan Leisure took to the mat to face off with #11 Henry Pohlmeyer at 149 pounds. It was a tight affair with Pohlmeyer’s third-period escape being the only point scored in the match.

Freshman David Carr rolled in his match at 157 pounds where he racked up a 16-5 major decision over Colten Carson. Carr exploded to a 12-0 lead after the first period with a takedown and a series of turns.

The Jackrabbits notched a big win at 165 pounds when Tanner Cook pinned Chase Straw in the second period. The Cyclone led 3-1 in the period and looked to be on the way to another takedown when Cook was able to roll Straw through to his back and cinch up the head and arms for the pin.

That put the dual on Sammy Colbray’s shoulders to maintain the team’s lead. The team leader jumped out to a 2-0 lead in the first period with a takedown and rideout. His opponent, Cade King was able to cut the lead with a second-period escape, but in the third Colbray was able to tack on to his lead with an escape of his own, followed by a takedown

Up next for Iowa State will be a return to their home mat where they will take on another Big 12 foe, the North Dakota State Bisons. That dual takes place on Sunday at 2:00 PM.

One thought on “Cyclones Take Top 25 Win Over SDSU”