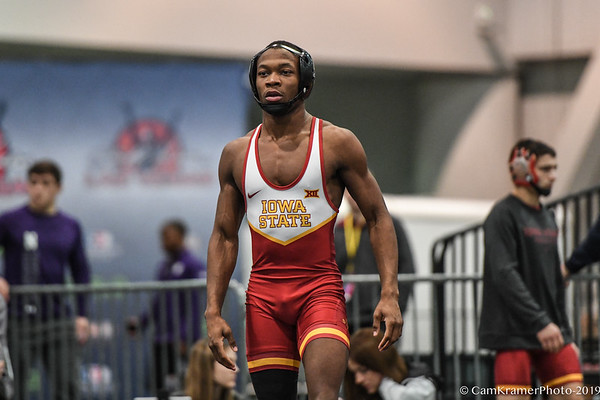 The Cyclones rolled to a conference victory over Utah Valley on Thursday night, racking up a 45-0 victory over the Wolverines. The Clones came out with a surprise move before the dual with news breaking that Sammy Colbray had swapped lineup spots with Marcus Coleman, with Colbray dropping down to 174 pounds. With the dual starting at 197 that meant that in Coleman’s debut performance at the new weight would be the night’s final bout.

Getting the nod at 197 pounds this evening was Joel Shapiro who came out guns blazzing against Tanner Orndorff. The Cyclone freshman picked up the first score in the match with a takedown and finished things off in the first period by taking down his Wolverine opponent to his back for the fall to put Iowa State up 6-0.

According to the broadcast, the #8 ranked Tate Orndorff did not weigh in for his match with Gannon Gremmel due to an injury which meant the Southern Scuffle champion instead made his conference debut against Chase Trussell at heavyweight. Things were knotted at one point a piece in the third period, but Gremmel tacked on the go ahead takedown to win by the final margin of 3-2.

The dual flipped back over to the lightweights from there with #12 Alex Mackall facing off with Will Edelblute at 125 pounds. Things started off a little rocky with Edelblute earning the first two takedowns, but Mackall was able to reverse and go to work on top. The Cyclone junior was able to turn Edelblute for another first period fall.

One of the night’s marquee matches between the ranked Todd Small and Greco-Roman standout Taylor LaMont certainly delivered as the two scored nine points in the first period with Small scoring two takedowns to LaMont’s one. The action continued into the second period with the two trading takedowns and Small maintaining a lead. In the final period LaMont looked like he was going to pull ahead and take the match, but Small persevered and landed a takedown with just seconds remaining to take the match 13-12.

It took Ian Parker a moment to get going, but once the 141-pounder was able to take control in the second period he never looked back. After earning an escape to get on the board, Parker followed up with a takedown and rideout to end the second period. In the final period Hunsaker opted to go underneath Parker, who was able to turn the Wolverine over for the third Cyclone pin on the night.

At 149 Ryan Lesiure was able to keep the pin training rolling with a first period fall over Landon Knutzen in the first period. David Carr made it three straight with his fall at 157 pounds.

After surrendering the match’s first takedown at 165 pounds Chase Straw flipped the script to come out on top of Koy Wilkinson by a score of 11-5.

In his 174-pound debut Sammy Colbray proved victorious over Grant LaMont winning 4-1. Colbray held a 1-0 lead heading into the final period and managed to takedown LaMont and finish his rideout to accumulate riding time for the 4-1 win.

Closing out the shutout was Coleman who came from behind to win his debut match at 184 by a score of 7-4 against Jacob Armstrong. Coleman gave up a pair of takedowns in the first period, but then took the match by scoring the next six consecutive points to win the match.