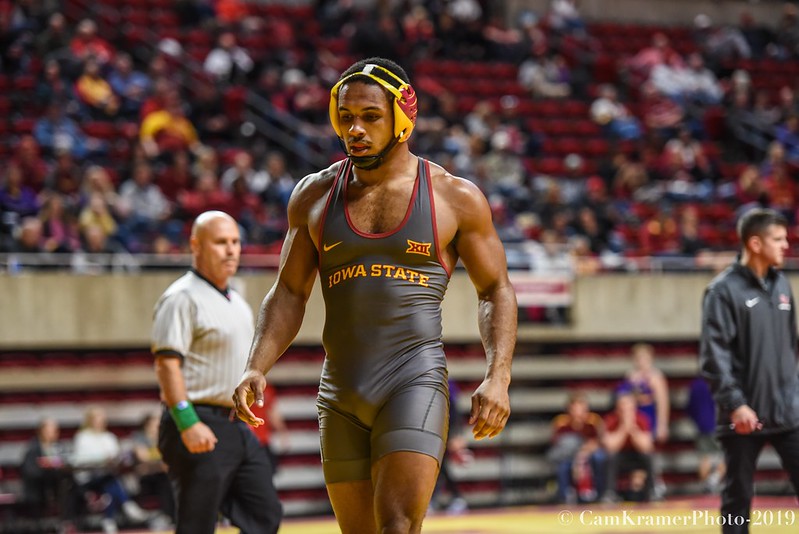 By Kolton Jensen and Ross Bartachek

The #9 ranked Cyclones will be a part of history this weekend as they travel to Tempe, Arizona to take part in the first ever college wrestling duals to happen on a Major League diamond. The #7 ranked Arizona State Sun Devils will play host to Iowa State, Campbell, and Harvard as part of a quadrangular inside of Chase Field. The team is coming off a huge conference win where they pitched a shutout against Utah Valley in Orem, Utah. As if the lopsided team score and bonus point barrage wasn’t enough to pump up the Iowa State faithful the team pulled a surprise move in the dual by swapping Sammy Colbray and Marcus Coleman in the lineup.

With the Utah Valley dual the first time Colbray weighed in at 174 pounds, it will not be all that surprising if Mac Southard, who is traveling with the team to potentially see a match or two this weekend as Colbray’s body adjusts to the new weight class. As a prep wrestler Colbray competed at 195 pounds and actually wrestled his first official NCAA match at 285 pounds as a true freshman.

Iowa State will start their day with a dual against a very solid Campbell squad. The projected lineups for both teams are as follows:

Iowa State is favored in eight of ten matches for this dual, but that doesn’t necessarily mean they will be able to run away with it. Before the Colbray-Coleman weight swap ISU was favored in nine of ten, and now Coleman will be tasked with trying to upset the #12 ranked Andrew Morgan. There are four matches going down between top 15 guys that could very well decide the outcome of the dual.

The marquee match in this one will be at 141 pounds with #5 Ian Parker taking on #9 Josh Heil. The Camel wrestler is currently 20-2 and coming off a Midlands runner-up finish. Parker, who finished 4th at the Cliff Keen Las Vegas Invite, is 8-2 on the year. Both guys are great defensive wrestlers that are hard to score on and very good on top.

The other highlight match will occur at heavyweight where #9 Gannon Gremmel will look to stay hot after winning a Southern Scuffle title as he takes on #15 Jere Heino, who is hoping to bounce back after a disappointing MIdlands where he failed to place.

In the second dual of the morning session, ISU will take on Harvard. The projected lineups are as follows:

Iowa State is heavily favored in this dual as well, as nine of the ten Cyclones are the favorites going in. This dual will only have one ranked match-up as heavyweight Gannon Gremmel will take on his second of three ranked opponents for the day when he takes on #12 Yaraslauh Slavilouski. Gremmel edged Slavilouski in a tight match at CKLV. Former Iowa high school stand out Nolan Hellickson will also be in action at 125 pounds against #12 Alex Mackall.

The main event of the day will be the Cyclones taking on the #7 ranked Sun Devils. The Sun Devils notably snapped Penn States’ 60 dual win streak earlier this year, but are coming off of a loss to Ohio State and will be looking to get back into the win column. Below are the projected lineups:

This dual is fascinating because of how it breaks down. Both teams are the favorite in five matches, however Iowa State is favored at the lighter five weights whereas Arizona State is favored to win the upper five weights. Momentum could be a huge factor for the Cyclones if this dual starts at 125, and they can win five in a row to start.

The Cyclones will likely need to score an upset or two as well because #1 ranked 184-pound Zahid Valencia is on a tear lately and would be favored to score bonus points as he continues to strengthen his Hodge Trophy resume.

While there are five top 20 matchups taking place in this dual, it could very well come down to the big guys. Gremmel pulling off the upset would be huge for the Cyclones chances of taking this dual.