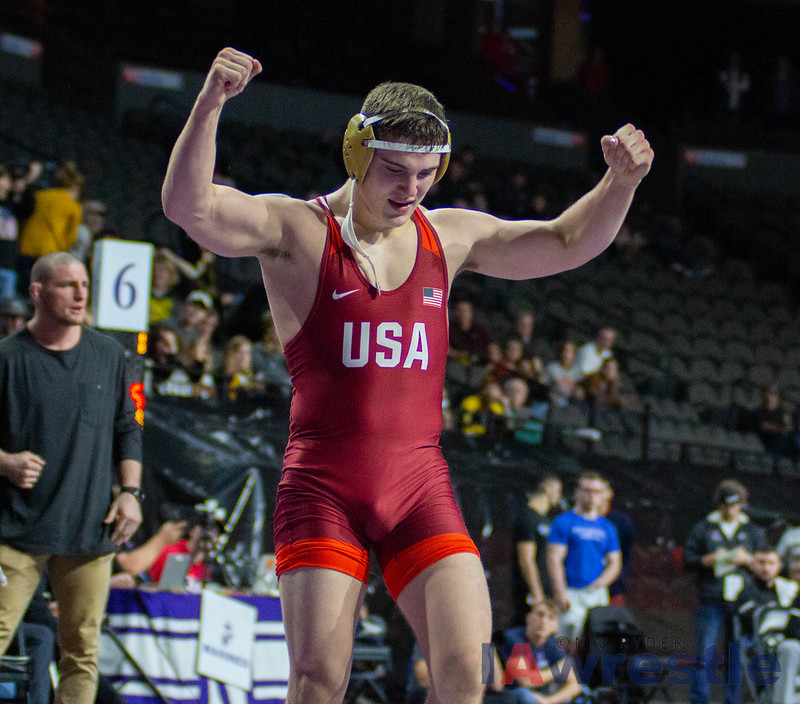 One of the best parts of the Midlands-Southern Scuffle time of the season is the amount of information the tournaments provide the public with about a given team. One of the biggest benefits is the two-day, multi-match format which helps teams prepare themselves for postseason competition in March. This gives the wrestlers their tournament feel they need, and gives everyone a glimpse into how the team fares in a competitive field of teams.

The tournaments also provide a snapshot of the future as team’s generally bring their backups and current redshirts to battle test them. Because of that its apparent that Iowa has already stockpiled some talent for the future with Abe Assad reaching the Midlands finals at 184 pounds, and Zach Glazier starting to look like a really promising 197-pound prospect after initially projecting at 184.

There is also an additional obligatory mention that for the purposes of this article the only wrestlers explored were current roster members (and in this case yes, Eierman is in that category), 2020 signees, and 2021 verbals. All target recruits were not factored in, which means the outlook will potentially need to be revisited. The future is always in motion, but that doesn’t mean right now isn’t a good time to sit down and pencil out what things look like as of today.

The Hawkeye lineup has all of the makings of a national title contending squad in 2020, but the 2021 squad looks pretty sharp too. As of right now the team only has three seniors starters who will need to be replaced – Pat Lugo and 149, 174’s Michael Kemerer, and Cash Wilcke at 184 pounds. That means they have a minimum the chance to return seven starters and potentially nine depending on how 184 shakes out and on Kemerer’s medshirt situation.

With the introduction of Jaydin Eierman the Hawkeyes will have three bonafide title contenders at the starting three weights. The idea has been floated to bump Eierman to 149 when he makes his eventual appearance in Iowa’s black and gold. That certainly could be the case, but Iowa could also bump current starter Max Murin up to 149 too.

There is still the question on whether or not Kemerer will qualify for a medical redshirt (which seems likely, given the current environment), and then there is the question on whether or not he will want to come back for a sixth year. If Kemerer does not return Iowa could slide Nelson Brands down to 174 and enter Midlands runner-up Abe Assad into their lineup at 184. If Kemerer does decide to come back he certainly doesn’t look like a small 174 so Iowa could potentially run him out at whichever weight they feel puts them in the strongest position to win the 2021 title.

As of right now the 2021 season looks to be a year in which Iowa has a lot of firepower, but they will also undergo a mass exodus of talent and experience from their lineup. They could essentially turnover half of their lineup. The two most likely wrestlers to have multiple years of starting experience would be Max Murin, Jacob Warner, and Tony Cassioppi in the upperweights. There is a chance Brands could too.

The biggest change will come at the lightweights where Iowa will lose Lee, DeSanto, and Eierman. That is a lot of bonus and placement points to recover from. The team is already utilizing Aaron Cashman who has filled in for Lee at 125 while he was training for the Olympic Trials qualifier last month, and 2020 signee Jesse Ybarra would be coming off of redshirt as well. At 133 Gavin Teasdale would have two seasons of mat time after missing all of his redshirt year and we will see if he can return to the form that made him a top ten recruit in 2018. If not another 2020 signee Cullan Schriever could begin his push for starting time.

Perhaps one of the biggest questions will be the 141 slot. Right now Tesdale and Schriever don’t look destined to grow into this weight (though things change in two years time) which leaves Iowa with potentially 2021 verbal Wyatt Henson as a legitimate option to go as a true freshman. As a high school junior Henson has already begun to tip his toe into the NCAA college open-waters. His comments indicate he would like to contend for a starting spot immediately, which is promising as the team may need him.

The middle of the lineup is a bit murky. How things play out in 2021 will go a long ways in seeing how this picture develops. As an example if Iowa and Eierman decide 149 is the optimal spot in the lineup that would mean Murin would likely stay down at 141 and he would then battle with Carter Happel to start there. Entering his senior year its entirely possible for Murin to be a career 141. For our purposes we assumed he bumped his junior season which would make him the logical starter at 149 in 2022. Murin’s decision in 2022 could decide whether or not we see Henson in the lineup.

It could also have an impact on Bretli Reyna, who currently projects as a 149 and 157-pound recruit. If Murin is at 149 the most logical situation would be to develop Reyna into a 157 so he is ready to take over for Kaleb Young for 2022.

Iowa will also have 2020 incoming recruit Leif Schroeder who is another prospect that slots in the 149 to 157 mold. Ultimately it will be interesting to see how the staff manages all of the incoming options they have at these two middle weights.

This would also be the debut season for Iowa’s biggest 2020 recruit Patrick Kennedy to make his entrance into the lineup replacing Alex Marinelli at 165.

If things are murky in 2022, they are clear as mud in 2023. The biggest obstacle would be not knowing how they 2021 recruiting class will shape up. Wrestlers committed in that class would be coming off of redshirt and they could obviously make an impact by this season. We are already assuming Henson will be a contender in 2022 so obviously things could get pretty fluid. Iowa only has three verbals, but they are pursing several more talents that could change a lot of this season’s potential makeup.

Iowa will still have Cashman and Ybarra at 125, and Teasdale at 133. Schriever does have some of project-ability to be a candidate to move up down the road, but we are taking into account he is only wresting 126 as a high school senior. One scenario could be to roll with Henson in 2022 and then Iowa would have the option to continue to start him or put him in redshirt and let Schriever move up if he needs to.

We also mentioned that Reyna projects as a 149/157. Its conceivable he’s more of a 149 which could mean that he and Caleb Rathjen – who has a ton of potential to grow over the next couple years could be flipped in this scenario. If Rathjen is at 157 we could see a 2024 scenario where Iowa bumps Kennedy to 174 and Rathjen to 165 depending on team composition

The 2023 year will also be the time for Iowa to replace Warner and the key contenders look like Zach Glazier (whom Brands describes as a junk yard dog-type of wrestler) and 2020 signee Gabe Christenson.