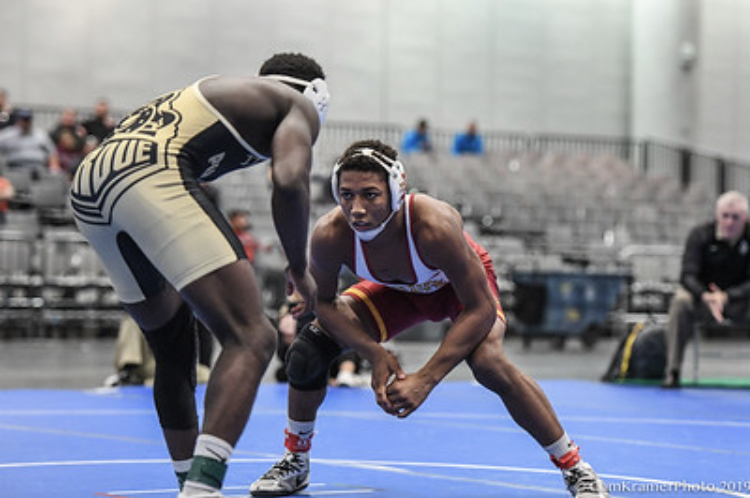 Iowa State jumped out to an early 9-0 lead after getting wins from Alex Mackall (125), Todd Small(133) and Ian Parker (141). Mackall defeated Fabian Gutierrez by 7-1 decision. Small edged Franco Valdez with a takedown with 0:07 left in the third period, 7-6. Parker made it three Cyclone victories in a row with a commanding 10-4 victory over Mason Wallace.

David Carr had the highlight of the night for the Cyclones at 157 pounds. He jumped out to an early 8-3 lead behind four first-period takedowns. In the second, Carr took Tyler Shilson down again and turned the Moc for four, blowing the match open. He iced away a 21-6 technical fall (5:30) with three more takedowns in the third period.

At the intermission, Iowa State held a 14-4 advantage over Chattanooga.

Out of the break, Chase Straw kept the Iowa State momentum going with a 5-3 victory over Drew Nicholson. Straw’s takedown in the first period and two minutes of riding time were the difference in the match.

Iowa State picked up victories at 174 and 184 pounds with winning efforts from Marcus Colemanand Sam Colbray. Trailing 4-3 in the third, Coleman scored a takedown with just over a minute to go in the period and rode Hunter Fortner to close out the match, winning it by 6-4 decision. Colbray’s match needed more than seven minutes to find a winner, but it was the Cyclone that came up with a takedown in sudden victory to defeat Matthew Waddell by 3-1 decion.

Gannon Gremmel put the exclamation point on the ISU victory. He took out UTC heavyweight Grayson Walthall by 6-0 decision to end the match. Gremmel scored on two takedowns and accumulated over four minutes of riding time in the win.

Next Up
Iowa State will get a break from the mat heading into the New Year. The Cyclones are set to begin 2020 at the Southern Scuffle on Jan. 1-2 in Chattanooga, Tenn. Coach Dresser will make a decision on who will be attending the Scuffle at a later date, but look for 15 Cyclones to ring in 2020 on the mat. The Southern Scuffle will be streamed live through FloWrestling.