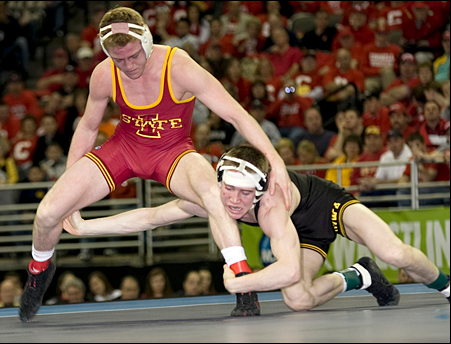 As we near the beginning of the 2019-20 season it felt appropriate to take a moment and reflect back on Iowa’s past. This season will be the ten year anniversary of the program’s 2010 NCAA title run which was capped off by a 134 team point performance in Omaha, Nebraska. The title was Tom Brands’s third in his tenure as head of the program and he outpaced the likes of Cornell and Iowa State to bring home the Hawkeyes’ 23rd team title.

With this year’s Iowa team well positioned to contend for title #24 we thought it would be fun to take a moment to reflect back on the program’s last team as well as draw some comparison between the last squad to win a title to this year’s team.

I can still recall the optimism for the 2010 Hawkeye team leading into that season. When Tom Brands returned to Iowa City from Virginia Tech he brought with him a host of confidence on returning the team to the days of Gable. Brands delivered on that promise in 2008 and then again narrowly in 2009. Despite the team inching by Ohio State in St. Louis back in 2009 there was no doubt that the team was in the driver’s seat to win three in a row.

For starters the team returned plenty of talent. The 2010 lineup wound up featuring seven seniors, and six of those wrestlers reached the podium in their final season. This team had multiple historic moments that are still discussed by the Hawkeye faithful today.

The first was the title won by then Iowa freshman Matt McDonough, who edged past fellow Iowa native and instate rival Andrew Long to capture the 125-pound title. While McDonough entered the tournament as one of the top seeds, his initial burst on to the scene surprised many out of the gate. To end the season with a NCAA title in his first season had many dreaming on a big future for the young wrestler. All told McDonough delivered on those expectations, winning a second title in 2012, and finishing runner-up in 2011.

Another big moment was the 149-pound championship for Brent Metcalf, who won his second NCAA title by defeating Ohio State’s Lance Palmer 3-2. In his time at Iowa Metcalf looked to be from another planet, but Palmer found a way to slow the relentless pace that made Metcalf a nightmare to compete against.

After taking second as a junior, many were looking forward to Metcalf going out on top and ending his career on a high note. Palmer looked to be putting that dream in serious jeopardy when he defeated Metcalf in the Big Ten finals, but Metcalf found a way to claim his second title by winning the rematch.

It’s also hard to forget the tournament that 174-pound star Jay Borschel put together on his way to his first title. It wasn’t that anyone doubted that Borschel had the talent to win a title, but after trailing 9-3 in the second period of his semifinal bout to the third seeded Chris Heinrich of Virginia things weren’t looking very promising.

It was in the second half of that match Borschel put on an impromptu clinic on how to never give up with your back to the wall. Boschel wound up winning his semifinal by the score of 10-9, and he then defeated Cornell’s Mack Lewnes 6-2 to claim the top spot at 174.

There were some not so fun moments from that team we also recall. Dan Dennis holds the honor of having one of the most gut-wrenching finals matches in Hawkeye history (pun intended for those who remember how Dennis’s gut-wrench in the 2016 Olympic Trials is probably the new iconic moment of this former Hawk’s career) as he gave up a last second takedown to Jayson Ness of Minnesota to lose his finals match at 133 pounds.

All told we could go on about every single wrestler in the lineup – but some of that will be saved for later content.

So how does the 2010 championship squad compare to their 2020 counterparts? For starters the team composition is drastically different. The 2010 team had seven senior starters, while this year’s lineup may only feature three – and that’s only if the NCAA doesn’t grant 174-pound starter Michael Kemerer a medical redshirt.

Where today’s Iowa does compare favorably is their lineup depth. The current team returns a total of seven All-Americans, and an additional wrestler – Max Murin, was a win away from All-America status this past season. The almost aligns perfectly with the 2010 team which produced eight All-Americans and had a ninth wrestler looking on the outside in.

This year’s team also returns a majority of its starting lineup but will need a big contribution from a new comer. For the 2010 team they saw McDonough enter the fray and enter the title contender conversation early. That will be a tall task for current freshman Tony Cassioppi, but the young Hawkeye enters with a strong pedigree and has plenty of buzz surrounding his emergence in the lineup.

The final comparison we will make between the two squads is regarding their excitement. There is little question on how exciting the 2010 lineup was. When you consider half the lineup wrestled in the NCAA finals and 80% of the lineup was a top eight wrestler it was obvious even at the time we were witnessing something special.

This year’s lineup is no exception. Fans have already witnessed what Lee can do when the spotlight is shining in March, but this past season we saw the emergence of other wrestlers like Austin DeSanto and Alex Marinelli that have quickly earned a cult following among the Hawkeye faithful. These three bring the high octane offense that appeal to every fan in the country.

Join the previous three wrestlers with the workman like wrestlers in Iowa’s lineup like Murin, Pat Lugo, Kaleb Young, Cash Wilcke, and Jacob Warner add in the return of Michael Kemerer and this Iowa lineup might have what it takes to match that championship team that took the mat a decade ago.

Let us know your favorite moments from the 2010 team by commenting on Facebook, Tweeting at us, or commenting below.