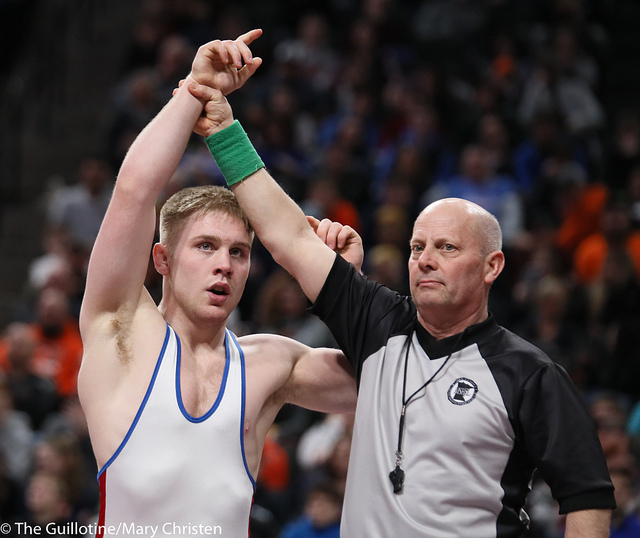 This fall Flowrestling will host their annual all-star dual event (at a location that is currently TBD, but we will get into that too) pitting some of the top talent in the country against one another. Born out of the idea of the winner of the event earning their website’s #1 ranking at a given weight class. The streaming based media company has already announced eight matches for their marquee event, and all 16 wrestlers currently hold a top five ranking nationally at their weight class.

And while their are only eight matches already announced, and several more on the way, fans of the Iowa Hawkeyes already have something to be excited about as three wrestlers who have currently verballed to Tom Brands will be featured in the dual. Two of the trio will battle for a number one ranking.

The first wrestler with a Hawkeye-tie announced in the event is Class of 2021 commit Ryan Sokol of Simley, MN. Ranked #3 in the country Sokol will take on Penn State recruit and #1 ranked Beau Bartlett (Wyoming Seminary, PA) in the bout at 138 pounds. Sokol most recently competed at the Cadet World Championships for the USA at 65 kg where he finished 10th.

The second match with a Hawkeye tie announced was between the #1 ranked (at 170) Patrick Kennedy (Kasson, MN) and the similarly #1 ranked (at 160) Alex Facundo (Davison, MI). Flowrestling’s lead high school editor Willie Saylor has already announced that this matchup will be the co-main event. This past summer Kennedy picked up a Fargo national title where he nearly won his every match in his bracket by technical fall.

The final match with a Hawkeye tie will be for the #1 spot at 120 pounds between #2 Jesse Ybarra (Sunnyside, AZ) and #3 Jakason Burks (Omaha Burke, NE). This bout will pit a future Hawkeye against another wrestler who is committed to an Iowa rival school. Burks has already given his commitment to Oklahoma State, a program Iowa duals annually going back to the Gable-era.

The venue for the dual has not been announced, but many are expecting Iowa City’s Carver-Hawkeye Arena to be the front runner. The event features three Hawkeye commits, which will draw in many local fans who are anxious to get an in-person look at what could be the future of their location. As many also know the state of Iowa is also known for it passion for the sport of wrestling. As a state, Iowa holds the single record for a dual meet attendance (42,287) and has also holds the record for attendance for the Olympic Trials. Not to mention that the Hawkeyes have led the nation in attendance among all NCAA programs for 13 years straight, and both Iowa State and Northern Iowa crack the top 20 on an annual basis.

It’s no secret that Iowa brings the fans to wrestling events, which is likely the reason Flowrestling would consider moving their event, which was traditionally held at Lehigh’s ‘Snakepit’ in Pennsylvania, and moving it west. Flowrestling might have tipped their hand earlier when they announced the Burks-Ybarra matchup. Their post preview previously read “Nebraska standout Jakason Burks will challenge Arizona star Jesse Ybarra for the #1 ranking at 120 pounds on October 5th in Carver Hawkeye Arena.” The post has since been amended to exclude “on October 5th in Carver Hawkeye Arena” and Saylor has stated on Twitter that the details are not finalized, though he also added the venue will be announced on Wednesday during the site’s ‘Who’s #1: The Show’.

Regardless of where the event takes place with the three future Hawkeyes competing in the event Iowa fans will undoubtedly turn up to watch the event – whether that be live in Iowa City, or in the homes through a webstream.

Matchups with an Iowa tie: