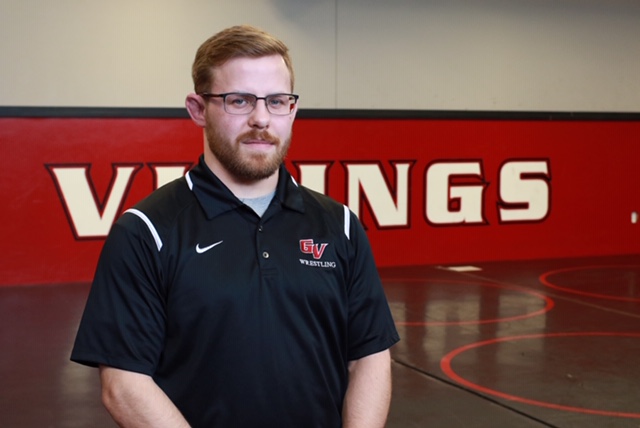 Grand View University is pleased to announce the appointment of Angelo Crinzi as the first Head Women’s Wrestling Coach. Grand View announced in January the addition of a women’s wrestling program beginning in the fall of 2019.

Crinzi may be new to starting a college wrestling program from scratch, but he’s no stranger to knowing what it takes to be successful. Crinzi, a 2014 Grand View graduate, was part of three NAIA National Championship teams and three National Duals Championship teams under current Grand View Head Men’s Coach Nick Mitchell. Coach Mitchell is eager to get his former athlete back on campus, “I’m really excited to have Angelo on board. He was around for the earlier years of the men’s program and knows what it looks like to build a championship program. He and his wife, Jenna, love Grand View and have been part of the family here for a long time. It’s a great fit for everyone involved.”

Angelo is a native of Tucson, Arizona and has been in the college coaching world for six years. Coach Crinzi is currently finishing his 4th season as the Head Coach of the men’s and women’s wrestling programs at Lindenwood University – Belleville. He has qualified wrestlers to the NAIA and WCWA tournament each year, including a women’s wrestler that took fifth at the U.S. Open and qualified for the World Team Trials. His women’s team placed 2nd academically in 2017 with a team GPA of 3.41. Overall, Crinzi has coached 21 WCWA National Championship qualifiers since becoming a head coach. He also increased the female roster from 4 to 23 in his first year as head coach.

Wrestling is Coach Crinzi’s passion. “I am excited about this position at my alma mater,” says Angelo. “I am at the stage in my career where I have developed an understanding that my mission is to be the best possible coach for my student athletes so they can achieve things they might not have thought possible. Joining a reputable and growing academic institution, like Grand View, is an amazing opportunity.”