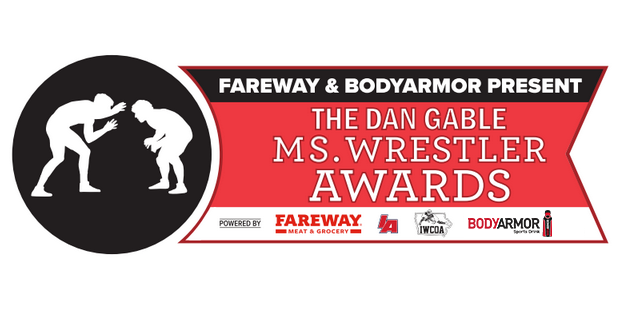 Fareway Stores, Inc. and Body Armor are proud to present the Inaugural Dan Gable Ms. Wrestler of the Year Awards in coordination with IAwrestle and IWCOA.

“This award has become a tradition in the state of Iowa and with the growth of girls wrestling it will be an honor to award them for their hard work.” said Jeff Stearns – VP Marketing & Advertising at Fareway Stores Inc

IAwrestle has nominated seven girls regardless of their year in school, weight and class to be in consideration for Ms. Wrestler of the Year.

Fans NOW have the ability to vote once per day for their top Mr. and Ms. wrestler until February 5th. (Top voted wrestler receives a nomination vote)

Another round of voting will take place to determine the three finalists. The fan votes will count as ONE vote towards the IAwrestle/IWCOA committee votes in EACH round. (The committee consists of four individuals with the fan nomination vote breaking any ties to determine winner)

All finalists will be invited to the season end luncheon gala in late February, where a winner will be announced for both Mr. and Ms. Wrestler of the Year.

“The addition of this award couldn’t of came at a better time. Girls wrestling is thriving in Iowa and it’s time to start recognizing them on their achievements.” – Tony Hager – Co-Founder of IAwrestle.com

(Top 15 finalist candidates results for Mr. Wrestler. That vote brought in almost 80,000 votes and awarded Drake Ayala (Fort Dodge 3A), Andrew Flora (ADM, Adel 2A) and Gabe Pauley (AHSTW 1A) each an extra vote towards the committee vote to reach our top 7.)

VOTE ONCE EVERY 24 HOURS. WAIT A FULL 24 HOURS. (FOR EXAMPLE: YOU CAN’T VOTE TUESDAY AT 8PM AND THEN WEDNESDAY AT 8AM BECAUSE IT IS A NEW DAY. 24 HOURS MEANS 24 HOURS)

VOTE ONCE EVERY 24 HOURS. WAIT A FULL 24 HOURS. (FOR EXAMPLE: YOU CAN’T VOTE TUESDAY AT 8PM AND THEN WEDNESDAY AT 8AM BECAUSE IT IS A NEW DAY. 24 HOURS MEANS 24 HOURS)