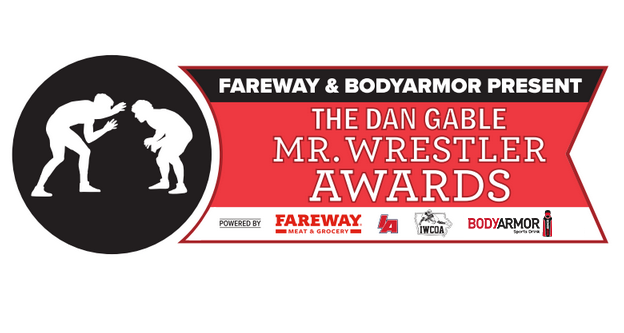 Fareway Stores, Inc. and Body Armor present the Dan Gable Wrestler of the Year Awards in coordination with IAwrestle and IWCOA.

The IWCOA accepted nominations from high school coaches for student athletes in each of the three state wrestling classes, regardless of their year in school and weight class. A committee selected by the IWCOA recently provided IAwrestle with a list of 15 finalist candidates for public input.

Fans have the ability to vote once per day for their top wrestler in each class until January 14, where it will be narrowed down to the top 7. (Top voted wrestler receives a nomination)

Another round of voting will take place to determine the three finalists. The fan votes will count as ONE vote towards the IWCOA’s committee votes in EACH round. (For example: Wrestler A received enough votes to be in second but might not necessarily move on to the next round. IWCOA has selected 12 coaches and officials for this committee. The fan vote is the 13th vote to break up any ties.)

All finalists will be invited to the season end luncheon gala in late February, where a winner will be announced in each class.