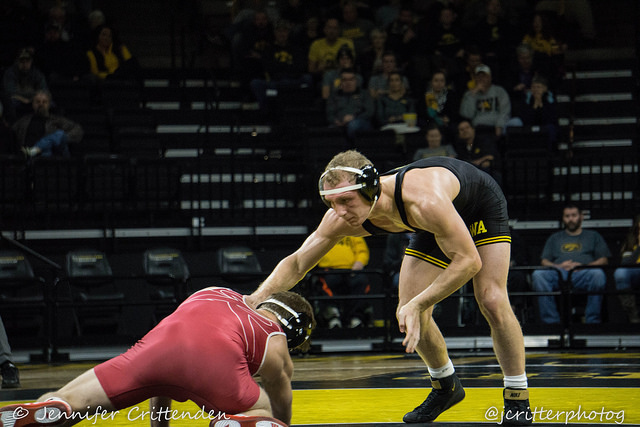 It was business as usual for the University of Iowa in Ohio as they cruised to back-to-back victories over CSU Bakersfield and Kent State. The Hawkeyes opener was a 35-3 drilling of the Roadrunners, which also accounted for the program’s 1,000th dual victory.

While Iowa was dominant for the majority of both of tonight’s dual the obvious sore point occurred in the first dual where Russell Rohlfing used some late match heroics to defeat Iowa’s #7 ranked Pat Lugo, 10-8 at 149 pounds. Lugo’s deficit began in the second period, but he managed to take tie the match at 8-8 in the third period. The newcomer’s debut was spoiled with under ten second to go as Rohlfing’s late takedown sealed the match.

Four other Hawkeyes made their lineup debut in black and gold, with two of those wrestlers notching bonus. Sophomore transfer Austin DeSanto whooped up on Sean Nickell, 22-6 while redshirt freshman Max Murin controlled his 18-4 major decision from the first whistle. Fellow redshirt freshmen Myles Wilson and Aaron Costello also picked up their first victories in an Iowa singlet.

Several more firsts were achieved in the night’s second dual. At 141 pounds, Murin secured his first official fall in an Iowa singlet in the second period against Cory Simpson. At the next weight Pat Lugo rebounded with a first period fall to get his first win official as a Hawkeye.

While sophomore Young made several starts last season, it was a debut of sorts for him as well, as he picked up two victories at his new weight class of 157 pounds. Young earned a 13-4 major decision against CSU Bakersfield’s Wyatt Gerl, followed by a second period fall over Kent State’s Richard Jackson.

For those keeping track, Iowa strung together three straight pins in their dual with Kent State, and Marinelli was able to make it four with his first period fall against Isaac Bast. Wilson wasn’t able to keep the streak alive, but still gutted out a 12-7 decision at 174 pounds.

Another Hawkeye then made his season debut tonight, this time in the Kent State dual. Connor Corbin won 8-3 over Shane Mast at 197 pounds. Costello closed things out, keeping Iowa perfect in their second dual 45-0.

One thought on “RAPID RECAP: Iowa Goes 2-0 In Ohio”