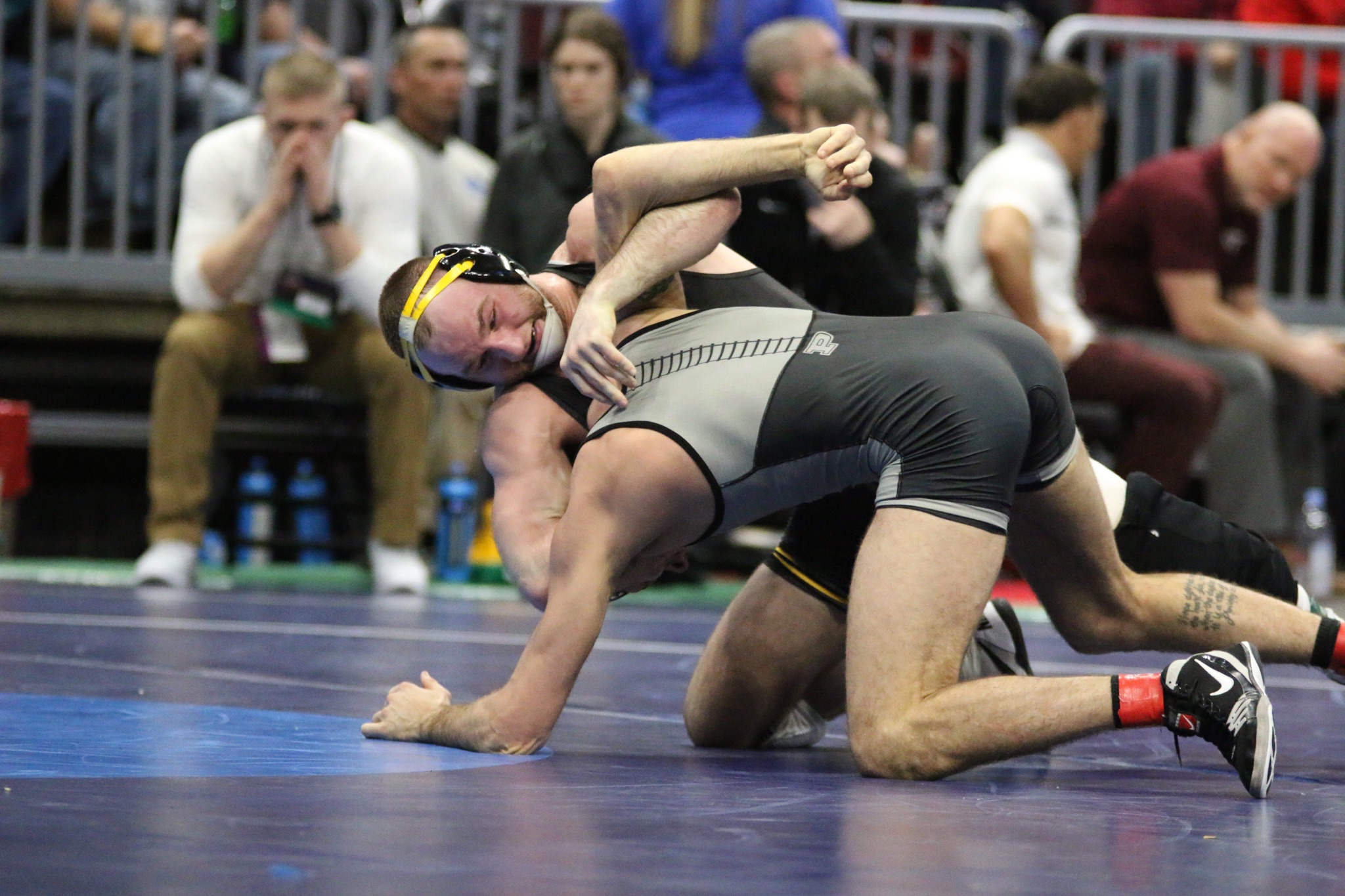 Returning true freshman national champion Spencer Lee will take on redshirt sophomore Alejandro Hernandez-Figueroa. Hernandez-Figueroa posted a 9-6 record for the Roadrunners last season. Expect to see Lee get to his offense early to score bonus points for the Hawkeyes.

Sophomore Drexel transfer and #10 Austin Desanto will make his Iowa wrestling debut against a solid Sean Nickell. Nickell was 24-12 last season posting a third place finish at the Pac-12 Championships earning him a spot in the national tournament where he went 1-2. Desanto’s high pace should lead him to victory but expect a fun match.

#10 redshirt freshman Max Murin makes his varsity debut against redshirt junior Carlos Herrera. Murin is coming off of a 16-3 redshirt record while Herrera posted a 12-8 redshirt season. The Hawkeyes will be hoping for more bonus points as Murin begins his journey as a starter.

Edinboro transfer Pat Lugo also makes his varsity debut for the Hawkeyes. He will face Russell Rohlfing who posted a 22-12 record for the Roadrunners last season, qualifying for the NCAA Championships with a second place finish at the Pac-12 tournament. Lugo is #7 on TOM and thought of by many to be a dark horse this season at 149, so we should see a dominating performance from him.

This is the first time Hawkeye fans will see #13 Kaleb Young at 157 after making the cut from 165/174. He put up a 9-7 record last year with a fifth place finish at Midlands Championships. He faces a JUCO transfer in Wyatt Gerl who went 20-10 as a Sophomore. Young is a smooth transitional wrestler who we should see get to his offense early.

After a dominating freshman season, Alex “The Bull” Marinelli will start his second year off taking on Jacob Thalin. Thalin recorded a 13-8 season last year at 157 and 165 for the Roadrunner while Marinelli earned All-American honors at 165 placing 6th at the national tournament. Expect to see bull-like-things from Marinelli.

Redshirt freshman Myles Wilson fills in for Michael Kemerer to face Bryan Battisto of the Roadrunners. Wilson posted a 15-2 unattached redshirt season while Battisto (Redshirt senior) wrapped up the season 12-16. This is a weight where CSU Bakersfield might be looking to get their first points on the board with a senior battling an unranked redshirt freshman, but Wilson is no easy task and should most likely get his season started off right.

Two-time NCAA Qualifier and #10 on TOM rankings Cash Wilcke will take on Dom DuCharme of the Roadrunners. Ducharme finished last season with an 18-15 record with a third place finish at the Pac-12 tournament. Wilcke qualified for the national tournament last season at 197, making this his first match after the cut to 184. Expect to see Wilcke press his dominate style on Ducharme and come out with victory. Hawkeye fans may remember the name DuCharme as Dom’s brother Joe was a member of the Iowa program from 2010-14.

Redshirt freshman Connor Corbin will take Jacob Warner’s spot Friday as Warner rests from recent freestyle competitions. Corbin, who went 13-4 his redshirt season, will battle redshirt junior Mark Penyacsek who finished with a 7-16 record at 285. This will be an interesting matchup as Penyacsek is wrestling at a more comfortable weight and Corbin is making his varsity debut.

Another redshirt freshman will make his debut for the Hawkeyes in lieu of Sam Stoll’s suspension. Aaron Costello takes faces redshirt sophomore Jacob Sieder. Costello posted a 15-4 redshirt season while Sieder finished 6-7 unattached. Costello is the favor in the final bout of the dual.

Soon-to-be crowd favorite #10 Austin Desanto will take on junior Tim Rooney of the Golden Eagles. Rooney finished the ‘17-18 season with a 29-14 record. Expect to see Desanto continue to win Hawks fans over.

#10 redshirt freshman Max Murin faces sophomore Cory Simpson. Simpson posted a 10-11 record in the ‘17-18 season for the Golden Eagles while Murin finished 16-3 unattached.  We should see a dominating performance from Murin once again.

The 149 pound dark horse Pat Lugo will battle sophomore Nick Monico. Monico went 20-12 as a freshman, so we should see good wrestling from both wrestlers here. Still expect to see #7 Lugo take care of business.

#13 Kaleb Young continues his first start after his weight cut to 157. He faces Ben Heyob of Kent State who ended the ‘17-18 season with a 12-10 record. Again, we should see good wrestling from both parties in this match, but Young should have little trouble coming out on top.

#4 Alex Marinelli will take on fifth year Isaac Bast. Bast finished 23-19, a respectable season at the division one level, however All-American Alex Marinelli is going to be looking to end his night with another dominating performance.

Redshirt freshman Myles Wilson continues his varsity debut in replacement of Michael Kemerer. He takes on Dylan Barreiro who posted a 21-19 record last season for the Golden Eagles. Although Wilson had a dominating redshirt season, Kent State might be looking to put up their first points on the board.

#10 Cash Wilcke faces sophomore Andrew McNally. McNally finished the ‘17-18 season 18-16 at 174 pounds. With Wilcke coming down from 197, and McNally bumping up from 174, expect to see a dominant performance from Wilcke.

Redshirt freshman Connor Corbin has his hands full with returning All-American #2 Kyle Conel. Conel finished his season last year 30-11, and is coming into his final season hungry for a national title. Corbin, who also has physical dominance similar to that of Conel’s, will be looking to keep the match close and not give up any bonus points.

Aaron Costello of the Hawkeyes faces fellow redshirt freshman Billy Bolia. Bolia finished the ‘17-18 season unattached at 12-13 while Costello posted a 15-4 redshirt season. As two wrestlers make their varsity debuts we could see a close match to end the night in Kent, Ohio.

Purchase a season pass by Monday and be in a drawing for two FRONT ROW tickets to Iowa vs Princeton. https://t.co/1YbzOttNnU pic.twitter.com/AcbokakeoM