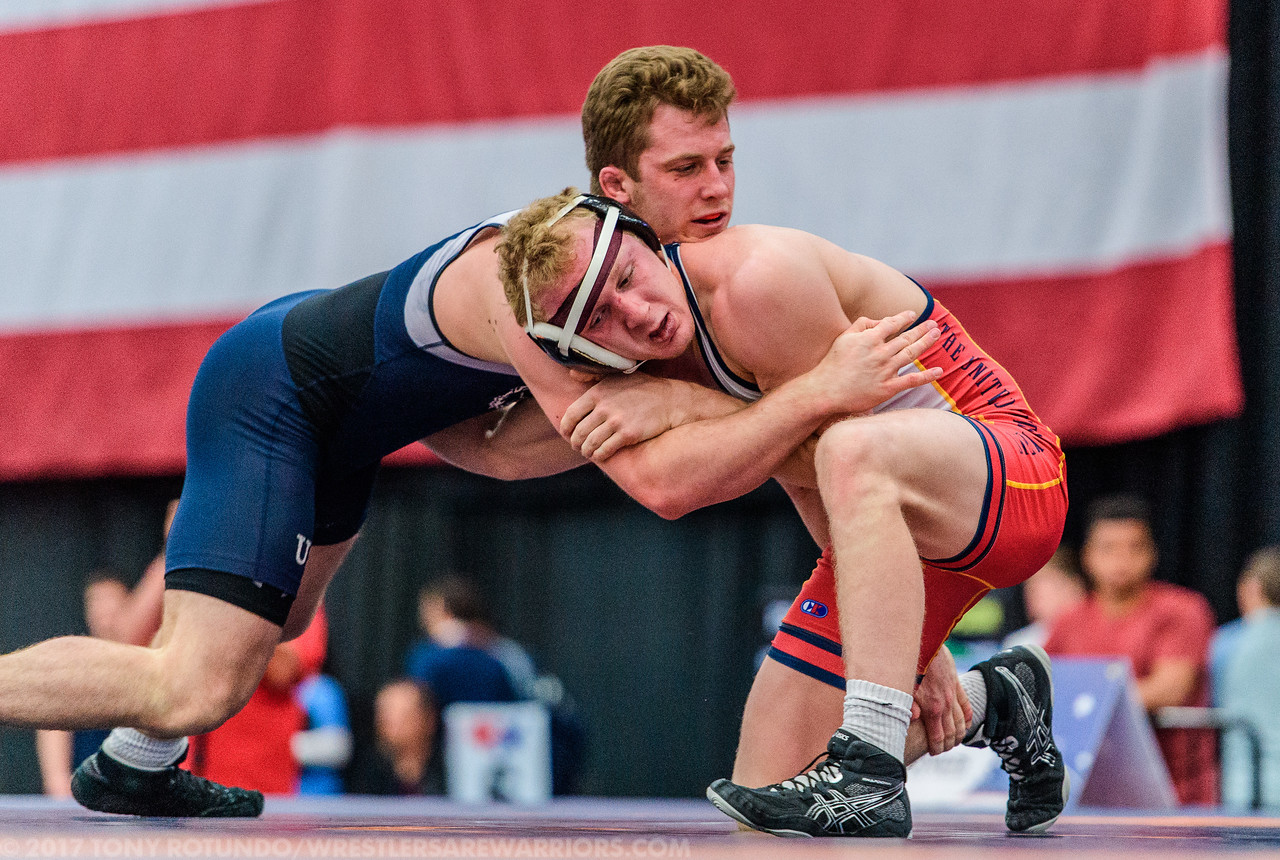 Five wrestlers with ties to the state of Iowa will be coming home All-Americans after the UWW U23 World Team Trials concluded competition today in Akron, Ohio. The University of Iowa led the way placing three of their wrestlers on the podium, while Iowa State also got an All-American and former Iowa high school prep Colton McCrystal also finished on the stand.

He came in as the weight’s #2 seed, so it was obviously a surprise when North Carolina’s Kennedy Monday edged the Hawkeye 7-6 in the quarterfinals. From there he rebounded first by defeating former Bettendorf prep Fredy Stroker by technical fall, and then posting victories over Old Dominion’s Larry Early, and Arizona State’s Josh Shields before ending his day with some revenge against Kennedy,11-4 in the third place match.

Taking fifth at 70 kg was Pat Lugo, who is expected to take over the 149-pound spot in the Iowa lineup next season. Lugo lost a tough match on criteria to Maryland’s Alfred Bannister in the quarterfinals but managed to reach the podium by getting wins over Evan Cheek and then posted potentially his biggest win when he beat Princeton All-American Matt Kolodzik 14-4. Lugo came up short against Nebraska’s Taylor Berger in the consolation semifinals before ending his day in a rematch with Bannister. This time the Hawkeye was able to come out on top 13-3.

Coming in above his seed was Cash Wiclke who finished fifth at 86 kg. Wilcke came in as the eight seed and made it to the quarterfinals at his weight before being downed by former NCAA champion Myles Martin 10-0. In his next match he defeated instate rival Sammy Colbray 7-4 to clinch All-American status and another win over Stanford’s Austin Flores, before ending  his day with a win over Alec Schenik.

He hasn’t officially suited up in the Cardinal and Gold, but Alex Mackall’s start to his Cyclone career looks to be off to a great start as he finished seventh this weekend at 57 kg. Mackall came into the program after transferring from Rutgers during the second semester and looks to be the guy to beat at 125 pounds next season.

Highlighting Mackall’s run was a 18-6 victory over Michigan’s Drew Mattin in the second round of the tournament. Mattin was a top ten ranked wrestler at one point this past season and is projected to be an All-American contender for the Wolverines if he wrestles.

Making a run to the quarterfinals was former Sargent Bluffs-Luton standout who finished the tournament third at 65 kg. After getting knocked off by Oklahoma”s Dom Demas on the front side, McCrystal added several key victories to reach the consolation finals over Ohio State’s Luke Pletcher and Oklahoma State’s Kaid Brock – both were All-Americans at the NCAA championships this past season.