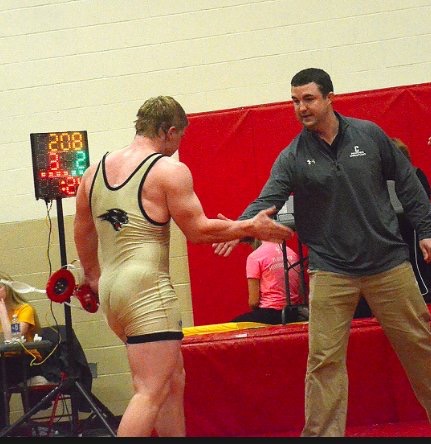 The Creston Orient-Macksburg program has found it’s new head wrestling coach and they didn’t have to go far. Creston alum, and former assistant coach, Cody Downing has been named the next coach of the Panthers replacing the great Darrell Frain.

Downing’s father was also the head coach prior to Frain and Cody has been around the program for a long time. When asked about that coaching tradition Downing told IAwrestle “I didn’t do it for that reason but it is something neat to talk about. Those are the 2 coaches that I remember in my life and I just want to continue the tradition that they started and keep things going in the right direction.”

Downing added “I’m honored to be the next head coach and leading our great tradition at Creston.”

Downing is a 2002 graduate of Creston High School where he was a state placewinner and part of the 2000 team that finished 4th at the traditional state meet and 2002 state duals team. Downing would go on to wrestle at Simpson College where he was a team captain, four year starter and NCAA D3 national qualifier. Since graduating from Simpson, Downing has been back in Creston spending time as a middle school wrestling coach as well as an assistant varsity coach.

Downing takes over a squad that qualified 5 wrestlers for the state tournament last season and will return state qualifiers Kaden Bolton and Kolby Hulett who will both be Sophomores next season.