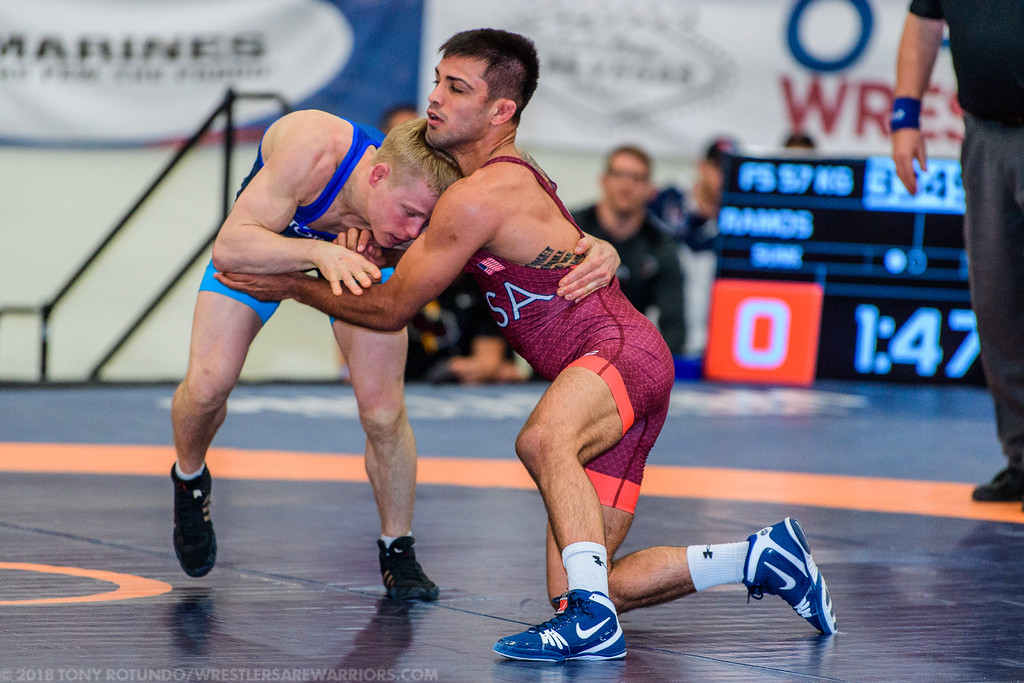 For the fifth year in a row, Tony Ramos is attempting to make the national team in Men’s Freestyle for USA Wrestling. The Men’s national team is awarded to the top three wrestlers in the U.S. based on our Trials process and receive benefits such as an annual stipend, invites to team camps at the Olympic Training Center, among other benefits. With the organization offering athletes both competitive and lifestyle rewards its easy to see why a wrestler would want to make the team.

Ramos, who has already made the team in each of the last four years, will look to make it five straight years next month when USA Wrestling hosts Final X: Senior Freestyle World Team Trials in Bethlehem, Pennsylvania. Unlike previous years the final wrestle off to make USA’s World Team has been spread out over the course of three weekends. Another change is that wrestlers competing in the true third place match to make the national team, like Ramos, compete on a separate weekend than year’s past. Previously the match would have taken place during the World Team Trials.

Enter the problem for Tony Ramos and USA Wrestling. Ramos was the U.S.’s World Team member in both 2014 and 2015, and the runner-up in 2016 and 2017. Earlier this month Ramos was eliminated from making the World Team by Daton Fix at the World Team Trials in Rochester, Minnesota. Rather than hang it up for the year Ramos informed IAwrestle he was preparing to make a run in a different style, Greco-Roman, in an attempt to make his third career World Team.

However, since the final step in making the World Team is now spread out over three weekends, this year Men’s Freestyle true third place matches overlap with USA Wrestling’s Senior Greco-Roman World Team Trials. With the freestyle tournament taking place in Pennsylvania and the Greco Trials in Oklahoma competing in both events would be next to impossible. But with an opportunity to make a World Team on the line, Ramos was ready to take on the impossible.

“I was looking forward to trying to make it possible to compete in both the Greco trials at 60 kg and the true third match the next day, in a different city at 57 kg.” Ramos told IAwrestle, “I tried working with USA wrestling to make it possible by requesting a 2 kg allowance at the true third match. It was voted down by the committee. I totally understand and accept their decision, but it would have been awesome if it was possible to make both work.”

The Greco Trials are scheduled to begin on June 21st and would conclude on the 22nd in Tulsa, Oklahoma. Ramos was planning on competing at 60 kg and assuming he made it all the way through the finals, he would weigh in at 62 kg on the the second day of the tournament (a 2 kg allowance is the standard allowance for second day weigh ins).

Ramos petitioned USA Wrestling to allow him to make 59 kg for his true third match Pennsylvania, which takes place on June 23rd. If Ramos were to make scratch weight for the true third match he would have to lose roughly ten pounds between day two of the Greco tournament and his freestyle match. Not to mention he would need to fly half way across the country.

While it may seem that Ramos was seeking preferential treatment from USA Wrestling, its really not as farfetched as one might think. Under the old system the true third match would have taken place the same weekend as finals of the World Team Trials. USA Wrestling has used a two day format for their trials for the past several years which means had this match taken place in 2017 both wrestlers in the true third match would have weighed in at 59 kg.

Making things a bit more frustrating is the fact that Greco head coach Matt Lindland gave a recent interview with Five Point Move (a site that exclusively covers Greco-Roman wrestling) that he opted Greco out of the Final X process in hopes that some of the wrestlers eliminated from making the freestyle World Team would convert and try to make the Greco team.

Instead Ramos will only be competing in the true third place match, where he will face former Minnesota Gopher Zach Sanders.