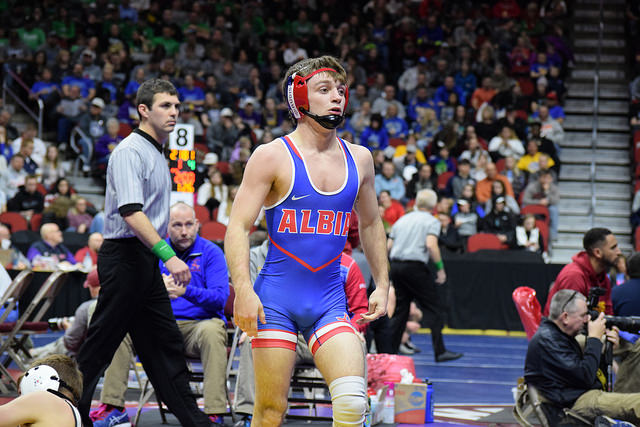 With the latest release of IAwrestle’s Fab 50, we break down the top 10 wrestlers in the class of 2019. The Fab 50, compiled by rankings guru Lars Underbakke, considers athletes who have at least one high school season under their belts. The list is a combination of folkstyle, freestyle and Greco results. Longevity also came into play for the upperclassmen as well. Due to this list including all weights, across all classes, head to head was not a major factor unless both guys were very close.

Going back to the first ever edition of IAwrestle’s Fab 50, Aden Reeves has been the lead wrestler for his class since he stepped foot on the mat as a freshman. It all started with the Albia prep earning All-American honors in freestyle and Greco-Roman prior to his first high school regular season match. Since then Reeves has never looked back racking up numerous awards and honors over the last three years. Now he sits #2 in our Fab 50, is a top 100 recruit nationally, and recently changed his verbal commitment to Kevin Dresser and the Iowa State Cyclones.

A direct contrast to the #1 ranked wrestler on this list, Julien Broderson is the class of 2019’s biggest mover jumping all the way up to #3 in the Fab 50 heading into his final year of high school. After missing the state tournament as a freshman, Broderson has been on a huge tear, winning two state titles, earning Fargo All-American honors, and has developed into a top 100 recruit that is entertain offers from Iowa State, Iowa, UNI, Campbell, Air Force, and South Dakota State. In an IAwrestle feature done last month, Broderson was hopeful that after another big summer he would be able to get more schools into the mix.

As far as the class of 2019 goes, Cade DeVos has seen his name appear near the top of this list for quite some time. DeVos has been ranked nationally going back to his middle school days when he was a USA Wrestling Triple Crown threat (national titles in folkstyle, freestyle, and Greco-Roman in the same season). Not much has changed on the high school level. DeVos has reached the finals in both years he was healthy enough to compete in the high school postseason, and last summer he was an All-American in both freestyle and Greco-Roman.

Akron-Westfield’s John Hernich has quietly climbed into our top 10 overall and top five in his class. Contributing to Henrich’s under the radar status is the fact that a) he wrestles in the state’s smallest class, b) Akron-Westfield is in the Western part of Iowa – which typically gets the least amount of exposure statewide, and c) he wrestled in South Dakota as a freshman – so he has really only been competing in Iowa for two seasons. Topping off those factors is another, albeit minor, fact that Henrich is also quiet on the FRECO circuit since moving to Iowa, which again limits the amount of exposure.

Despite all of that, he’s a two-time state champion and was the third place medalist at USA Wrestling Preseason Nationals. He’s projects as an intriguing middleweight prospect at the next level.

The second wrestler from Southeast Polk in the top 10, Lance Runyon is another wrestler that had a fair amount of success prior to reaching the high school scene, but he has really come into his own over the past year. Over the past year Runyon earned All-American honors at Fargo in freestyle and Greco-Roman and placed third at potentially one of the toughest weights in the state of Iowa.

Runyon was on the smaller side of 152 pounds this past year, but that shouldn’t be an issue for this weight anymore. He still has some room to grow before hitting the next level where he is currently in talks with Iowa, UNI, Nebraska, Northern Illinois, Campbell, and Ohio State.

Making a big move in the Fab 50 rankings was Nick Oldham, who jumped a pair of fellow classmates and now finds himself in the top ten overall. He began his high school career red hot making the state finals as a freshman. As a sophomore Oldham took a slight down tick due to his fifth place finish at state, particularly his loss to Cody Anderson (who is no slouch #46 on this list). The thing about Oldham was how strong he rebounded following his state tournament nearly placing at the prestigious Super 32 and then winning his first state title.

Now Oldham finds himself as the state’s top available lightweight, and with his career trending in the upward direction he looks to be an extremely attractive Division I prospect.

One of the classmates Oldham jumped over was none other than Clarion-Goldfield-Dow’s Spencer Trenary, who finds himself outside of the top ten overall despite owning a national title to his name. USA Wrestling’s 2016 Greco-Roman national champion, Trenary competed in one of the state’s toughest brackets this past season as the 2A heavyweight bracket featured a past freestyle All-American and a wrestler ranked in the top 20 nationally. Trenary fell to one of two – Atlantic’s John McConkey – in the finals.

With both of those wrestler graduated, Trenary looks to be a big favorite to win his first state title. He’s got plenty of size to him, and with a big summer on the FRECO scene he should pop up on more Division I teams’ radars.

Yet another talented lightweight in this class, Faught looked to be one of the top wrestlers in this class, but he has been searching for the same level of success he experienced his freshman year. Faught began his career with a runner-up finish at the state tournament (in the same bracket as Reeves), a runner-up finish at UWW Cadet Nationals, and All-American honors in freestyle out at Fargo. As a sophomore he took third (his loss was to Reeves) and then he was runner-up again in 2018.

There is no denying Faught’s abilities he is still very much a threat to reach the podium on the FRECO scene this summer. It’s not a matter of “if” Faught breaks out its “when”.

Making his Fab 50 debut is PCM Monroe’s Lucas Roland who is coming off a state title performance as a junior as his breakthrough performance. Already committed to wrestle for Campbell University, Roland’s breakthrough junior season was a memorable one as he capped off his state title run was the first in school history for PCM. Not only that, but Roland’s 49-1 season came at time when his mother, Jeri, was battling breast cancer.

The final top ten wrestler hails from 1A powerhouse Don Bosco, as Daniel Kimball is also making his debut in our Fab 50. Kimball has always been one of the state’s top lightweight wrestlers, but one of the factors holding him back to this point has been his size. He has been a career 106-pound wrestler, but this was the first season he looked the part a full size 106. It definitely showed this past season as he was able to lock up his first state title by downing fellow junior Jaymus Wilson in the finals.

But that is far from saying Kimball hasn’t been successful on the high school level. In the past year alone Kimball won USA Wrestling’s Folkstyle nationals in 2017, was a 2017 freestyle All-American, and he was 12-2 as a member of Team Iowa’s Junior National Dual team last summer.