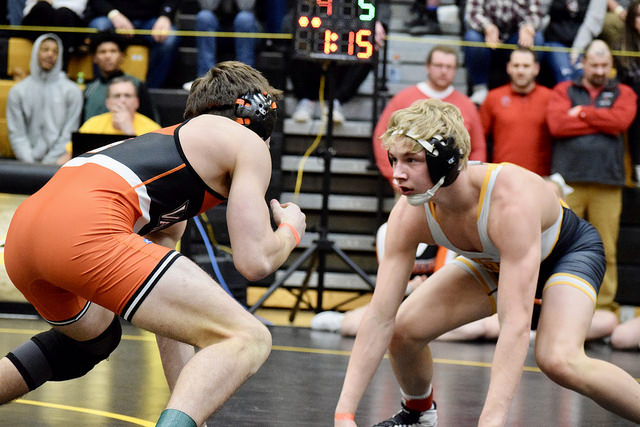 “I can compete with the best guys in the country.”

It may sound like a boastful statement, but if the last 12 months have taught us anything about Lance Runyon its that those words are true. A star wrestler on the nation’s #39 ranked high school team, Southeast Polk, Runyon’s performance over the last year has pushed him to the up the list of top Iowans in the 2019 class, and he has already drawn interest as a recruit nationally.

After he took third place at the state tournament as a sophomore, Runyon put his nose to the grindstone and hit the USA Wrestling freestyle and Greco-Roman circuit last summer where he racked up numerous accolades while representing the state of Iowa. For starters there was the Northern Plains Regional located in Rochester, Minnesota. The event is typically well attended by many wrestlers from all over the Midwest. As a regional qualifier for the national tournament held in Fargo, North Dakota the event draws some of those states’ top athletes as those wrestlers use the event to qualify, and as an opportunity to face some strong competition before the biggest tournament of the year.

It should then be rather obvious winning the event is an impressive accomplishment. Even more impressive would be winning both the freestyle and Greco-Roman tournament, which is exactly what Runyon did.

He followed up going a combined 8-4 for Team Iowa across the two styles in the Cadet National Duals, with the team finishing in the top ten for both styles. He then continued his momentum into earning All-America status in both freestyle and Greco as an individual, placing third in the former and eighth in the latter style. For Runyon those accolades will hopefully be just a stepping stone, as he has his sights set on larger achievements – specifically USA Wrestling’s octagonal shaped national title, often times referred to as a “stop sign”.

“It’s been a dream of mine to earn a stop sign and be on the Iowa USA Wrestling poster ever since I was a little kid.” Runyon said in our interview, “I think there is a lot of work to do still but earning that third place finish in freestyle definitely showed me my potential and how far I can go.”

Some of his success Runyon credits to the Southeast Polk coaching staff in helping him perfect his craft. After winning two state medals at Indianola high school, Runyon and his family moved school districts to Southeast Polk in Pleasant Hill. Just being in the new room Runyon was able to notice the difference in his wrestling.

“When I started wrestling at Southeast Polk last summer, with the help of my coaches, I started to focus on the things that I am good at and try to perfect those areas. I learn something new every time I step on the mat. I realized I can compete with the best guys in the country.”

After moving to Southeast Polk Runyon had a bit of a dilemma as his friend and teammate, Cade DeVos looked to have outgrown the 138-pound weight and was headed to 145 for the season. Rather than cut down and force a wrestle off situation, Runyon opted to go up a weight and compete in the loaded 152-pound field. And I mean loaded. By the end of 2018 the top four wrestlers in 3A at 152 pounds featured two wrestlers ranked in the top 20 nationally (Grant Stotts and Harlan Steffensmeier), a USA Wrestling Preseason national champion (Cayd Lara), and Fargo All-American (Runyon).

“I think my bracket was the toughest in the state.” Runyon said reflecting on this past season, “I had a lot of obstacles to overcome this past season. I was definitely one of the smallest guys at 152 all year and I learned that size and strength doesn’t matter because I competed with some of the best guys in the state/country. Nothing is handed to anyone, you have just got to earn it.”

He may have finished third for the second straight season, but Runyon’s 2018 tournament was still a successful one. After being downed by eventual runner-up Lara in the quarterfinals, Runyon battled back to win the consolation bracket. That included his key 5-2 victory over Stotts who had managed to get the better of Runyon on three different occasions earlier in the season.

Naturally, Runyon has no plans on getting complacent despite ending his season with a marquee victory. Instead Runyon will pound the pavement this summer as he plans to compete locally at the Iowa USA Wrestling’s freestyle and Greco-Roman state championships, and his out of state schedule includes heading to Akron, Ohio for the UWW Cadet Nationals where he will attempt to make an age level World Team for the United States, before ending his summer back in Fargo at the freestyle and Greco-Roman nationals. Runyon also mentioned the possibility of returning to the Northern Plains Regional, though that has yet to be decided.

In addition to his busy summer competition schedule, Runyon will also begin weighing the offers of numerous potential suitors that have come calling, hoping to land his talents at their school once he graduates from Southeast Polk. Runyon said college coaches upped their interest in him following his big Fargo performance last summer.

“After Fargo I did get quite a bit of interest from college coaches. I always thought it would come but I think the performance did help.”

So far Runyon has received a heavy amount of interest from several schools located in the Midwest, including interest from several of the Big Ten’s best. This summer Runyon will attend two college camps at the University of Iowa and Nebraska – two schools currently on his list, and he has already taken an unofficial visit to Northern Iowa’s campus.

“I love UNI and the leaders that run the program.” Runyon said of his unofficial visit, “The campus is very nice and I think the program has great potential in the future.”

Official visits for the 2019 class will take place in the fall, which means we may have to wait to find out where Runyon is headed once he finishes up at Southeast Polk. While he would prefer to have the decision made prior to the start of competition this winter, Runyon is comfortable waiting until the end of the year to decide his future.

“I’m hoping to make my decision before high school season, and if not I will be in no rush to make it after state.”

Runyon is currently in contact with Iowa, UNI, Nebraska, Northern Illinois, Campbell, and Ohio State, but is still open to discussing with other teams at this time.