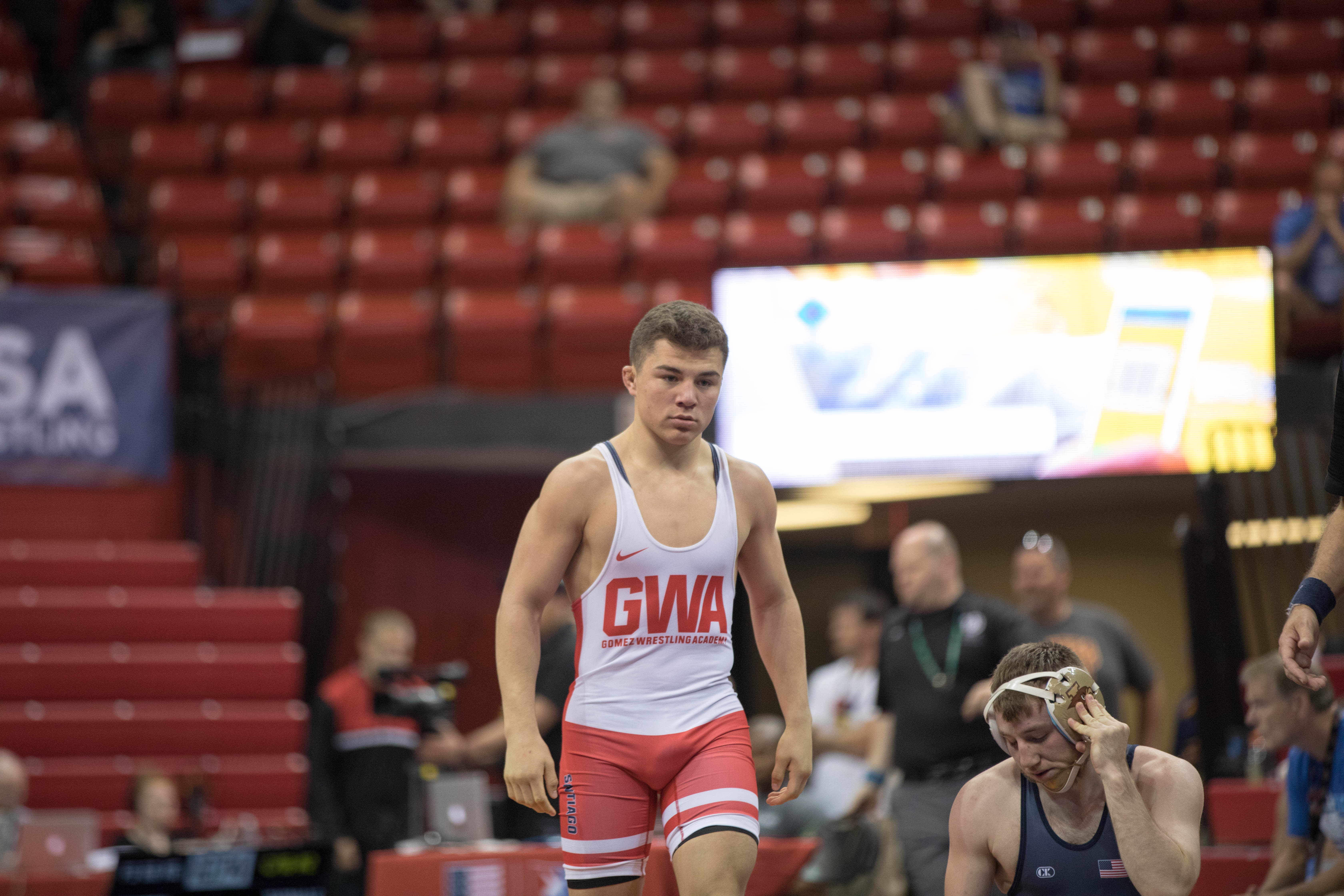 Austin Gomez is a national champion. In late April the Iowa State wrestler picked up his third career freestyle national title go along with the two he won as a high school wrestler (he also won two Greco-Roman national titles in high school as well). This title might be the most significant for Gomez as his rampage through the 61 kg field in Las Vegas, Nevada is the first step toward a much larger goal.

The event was USA Wrestling’s UWW Junior Men’s Freestyle Open and it typically takes place every year at this time. The “Junior” designation refers to athletes who are between the age of 17-20, and it’s also a division that is right in the middle of the developmental ladder to the highest level of wrestling – the Senior division.

Many of our nation’s star Senior level wrestlers can trace their roots back to their days competing at the Junior level. In 2017 our nation put together its first World Team title in over 20 years. Half of the squad at one time or another wrestled at the Junior World Championships for USA – Thomas Gilman, Logan Stieber, Jordan Burroughs, and Kyle Snyder – and another wrestler, Zain Retherford, was a Junior Team alternate on multiple occasions.

All of that goes into what Gomez is attempting to do by making a Junior World Team this summer. The first step in the process of making that team takes place at the Junior US Open. While there Gomez wasted little time on the mat, winning five of his six matches by technical superiority (outscoring his competition by 10 points or more in a match) including four straight shutouts and a finally combined tally of 68-16.

“I was very pleased with my performance in Vegas.” Gomez told IAwrestle, “I felt very offensive and never defensive throughout the entire tournament. I have to thank the coaching staff because they always tell me no one can stop me when I’m firing off attacks. I feel like my best is still to come. Even though I won, I still have a lot of techniques and positions I need to make tighter and crisp for me to be at my best.”

“Gomez was Gomez.” Brent Metcalf, who serves as a coach of the Cyclone Regional Training Center, said to IAwrestle, “He went out and wrestled with a purpose and mission, and knocked the doors off it. He was sharp and clean. He got his back against the wall, stayed composed and kept building. This is what its going to take for him to be the World Champion. Back to work for him as he prepares for two matches in May to make the World Team and represent USA.”

Throughout his run Gomez was really only tested on two occasions. His closest match came in the semifinals, where he edged Missouri high school prep Josh Saunders 14-12. His second closest match then came in the finals where he defeated Ohio prep Jordan Decatur 14-4 to claim his octagon shaped national title trophy – affectionately referred to as a “stop sign”.

“It definitely felt good to finally get the job done in Vegas and get that stop sign.” Gomez said, “It feels good knowing that all the work being put out in the room is starting to pay off.”

The next and final step in the process of making the Junior Team will take place in Rochester, Minnesota beginning on Friday, May 18th. There wrestlers from across the nation will compete in a bracket with the winner advancing to a best-of-three wrestler off to determine the champion. By virtue of his US Open title, Gomez is already qualified for that best-of-three wrestle off, which puts him in a very favorable position to make the team.

With his challenger needing to navigate an entire bracket in order to reach the wrestle off, Gomez has the benefit of being more rested when the time comes to compete for the World Team spot. Gomez is well aware of how big of an advantage it is to be the wrestler sitting in the finals, as he was on the opposite side of this scenario a year ago. That tournament ended with him finishing runner-up.

“Taking second last year left a sour taste in my mouth until (the Open’s) results, but it only made me hungrier and work harder to finish on top. Sitting in the trials finals is a huge advantage, because I don’t have to go though a grueling challenge tournament then have to wrestle the best two of three series. Although, I have a big target on my back now because I’m the man so I have to push myself to new heights and find those deep waters to get what I want. To make that Junior World Team.”

If he is successful, Gomez will don the USA singlet for the second time in his career having made a Cadet World Team back in 2011 (Cadet being the division below Juniors). Making this team is one of several goals that Gomez has set for himself, and by making this team he hopes to use it as a springboard into his first season as an attached wrestler for the Iowa State wrestling team.

“I’m excited for next season because this is what I have been training for my whole life is the Division I wrestling level. Although, I have to earn my spot on the lineup and I know it won’t come easy because we have a lot of talent in the wrestling room that everyone does not see. I know that wrestling in the summer will only help me get ready for the upcoming season. My dad always said to me, “Summer wrestling builds winter champions”, and that has always stuck with me because I want to be on top of the podium come March.”

The Iowa State program is currently in the middle of a rebuild. After contending for conference and NCAA titles in the late 2000’s, the Cyclones had a big dip in production, prompting the program to make a coaching change in the middle of the 2017 season. Now led by Kevin Dresser, the Cyclones are looking to get back on track and the program has put a significant investment in freestyle development.

Dresser doubled down on his club this year when he brought back alum and former World bronze medalist Nate Carr to serve as the Director of Operations.

With both the wrestling club and college program on the rise placing a wrestler at any level on a World Team would serve as a signal of big things to come.

“Gomez is a great leader for this team moving forward. His mentality is what this program needs injected into it every day and he does that.” Metcalf said, “Him making this team is a step for him, his goal is to be on top of the podium. As we move forward as a program this sort of mentality will continue to bleed into the room and send us in the direction we are looking to be at.”

Last year was Gomez’s first season in the college ranks, and while he was likely the best option in the room at 133 pounds for the Cyclones, coach Dresser opted to keep the redshirt on the talented freshman. Despite the fact that fans knew the chances of seeing Gomez in the lineup were slim to none, many were still excited at the prospect at being able to see him compete in open tournament as an unattached wrestler.

Unfortunately things don’t always go to plan as a concussion held the star wrestler out for a majority of his first season. It was a situation that was difficult for a mat rat like Gomez to deal with, who is used to competing year round.

“Missing the first semester of the season was a real bummer because I was so excited about competing and showing off my skills.” Gomez said of his time on the shelf this past season, “Spending a lot of time off the mat was hard because I had to sit and watch my teammates scrap in the room everyday and knowing I couldn’t do that was really hard on me.”

Sometimes life hands you a difficult situation and forces you to either wallow around in self-pity or it teaches you to embrace the challenge and make the best of the situation. Even though Gomez wanted nothing more than to be out on the mat drilling and working on his technique, he also knew that he needed to focus on the things he could control.

“Diet and nutrition was a big thing that I was able to improve upon while off the mat because I was able to focus on it much more. I found out what foods made me feel good to help with weight management and how to manage my weight properly. I was able to become a lot mentally stronger while off the mat. As I mentioned before, it was hard to watch the team scrap everyday in the room while I had to sit out. So, that took a lot out of me mentally but I knew I had to stay strong and take my time to recover.”

Now back to healthy fans of wrestling are finally able to see Gomez compete again and as he showed in Las Vegas, he has what it takes to be considered one of the best in the country. He will head to Minnesota in a strong position to make his first Junior World Team against a field that is expected to be fairly similar to what we saw in Vegas.