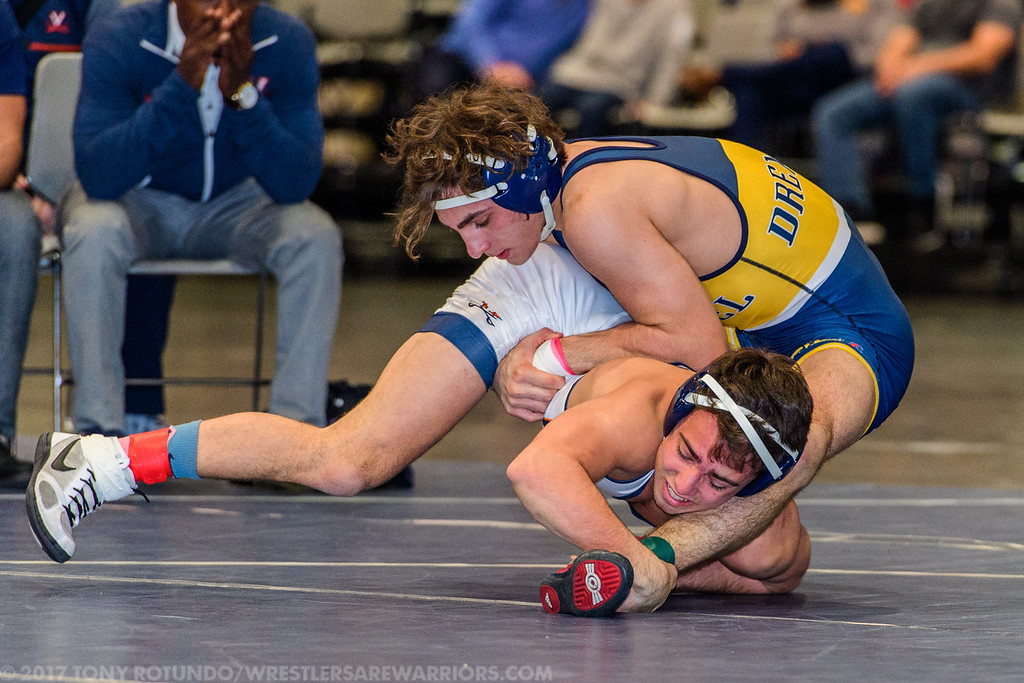 Since I got a little…animated…on the last episode of Potentially Dangerous talking about Drexel’s Austin DeSanto I thought I’d try to make my point my clear in writing. It probably won’t work, but here I go.

For those of you who don’t know, Mr. DeSanto was Drexel’s 133 pound wrestler this past season. Tuesday, Penn Live reported that DeSanto was granted a full release from that school. And, according to his high school head coach Jon Rugg, everybody is interested in bringing him on campus.

“It’s everybody,” Rugg said to Penn Live. “Just a ton of schools are interested in having him. I don’t really know what his plan is weight-wise or how that fits or what coaches are going to fit his style. I’m not one-hundred percent sure.”

Those “everybody’s” reportedly include Iowa, Nebraska, Penn State, Rutgers, and Virginia Tech. For the sake of this article, I’ll focus on Iowa. Everybody knows about Iowa right? They’re the school that has won 23 national championships, had a coach named Dan Gable, but hasn’t been on top for the past eight years – their longest national title drought since their first banner in 1975. And while Iowa is currently playing catch-up to Penn State, lets not pretend that the Nittany Lion’s eight is even close to being on par with 23.

Sorry to the folks who live in Happy Valley – I’m not trying to be intentionally aggravating, but I can’t compare the two numbers yet. We’re in the middle of a Penn State dynasty, but Iowa (and Oklahoma State might be in yet another class) is still ahead of you.

Anyway back to Iowa. The Hawkeyes find themselves in the unenviable spot of chasing PSU and some other squads the last few years, and in order to fix that they’ve had to change who they are a little bit. There’s a much bigger emphasis on recruiting – which includes pretty much everything with the program; the atmosphere in the room, getting better facilities, etc.

The biggest change that I’ve seen lately is the one that relates to DeSanto: the recruiting of so-called “free agents” to boost where they are right away. Pat Downey, Joey McKenna, and now DeSanto. And while this change isn’t new to sports at all, there’s just something that feels different about these.

For the record I’m not against Iowa bringing in DeSanto. I think what he did against Steven Micic was not allowable; he probably should have been disqualified from the tournament and those officials should face some sort of discipline for allowing it to go as far as it did. Some wrestlers are more mature than others as freshman and I think he should be given another chance, where ever he wants to go with whoever is willing to bring him on board.

Maybe because it’s Iowa – the Hawkeyes are known, or at least they used to be, for bringing in guys with a certain mentality and boosting them up. Using an unrelenting pace they wore their opponents out even if they weren’t always the most “talented” guys. Gable brought in the men who he felt fit that Iowa mentality, and whether it was those men, the landscape of college wrestling, or just Gable himself willing it to be so, that worked. And Iowa fans took hold of that style and mentality and ran with it and to this day many believe that’s how Iowa wrestling should be.

But there’s something different about bringing in these types of transfers – men who, for one reason or another, were unhappy where they were and want(ed) to go somewhere else (or were forced to discover other options). I don’t really know why I feel that way; maybe it’s because they’re not “home grown boys” – men who we saw struggle early in their careers, stuck through it and put in the work, and then emerged on the other side an All-American – all while doing it in black and gold.

There is something about seeing a guy like Tony Ramos, who missed the podium his freshman year, come back and be a three-time All-American and a National Champion his senior year, embracing that “Iowa Style” and doing it all in a black singlet (nevermind what all came after). Ramos, of course, was not without talent and was a great high school wrestler, but watching him climb each rung and then finally achieving the his goal is what makes wrestling worth watching.

I might just be too much of a stick in the mud for this. And it’s not that I don’t think guys shouldn’t be allowed to transfer, because I do. And Iowa has transfers on their roster now – the Pats, Duggan and Lugo – that came in with less fanfare (well, maybe not Lugo) and will be Hawkeyes just like everybody else on the roster.

More than anything, I just feel like these fixes are temporary, like putting a band-aid on cut that needs stitches. Will the band-aid help? Probably, for a little while. But why do they need the band-aid in the first place? What caused the bleeding and is sticking on a temporary fix really better than sticking with a more-long term solution?

Iowa is addressing some of these concerns. Landing the once-in-a-generation wrestler in Spencer Lee helps recruiting. Showing more of a human side rather than the stereotypical Iowa-robot-never-ever-ever-stop-training side helps too. People see that Iowa coaches and former wrestlers care about each other, on and off the mat. Stories about Tom Brands’ recruiting have circulated and people are getting looks inside what happens at Iowa’s program like never before.

Oh and there’s the feasibility study being conducted (or having been conducted?) for an all-wrestling facility. That’s the biggest, brightest thing that Iowa can point to and say hey, get us this, and we can be on top again. Personally I don’t think that’s the end-all, but it can only help them. I also find the politicking and probably-way-too-deep details with that project much more interesting than the final product, but that’s probably just me.

All of this improving is geared towards one thing – improving recruiting. Whether it’s high schoolers, college transfers, or professionals (Hawkeye Wrestling Club anybody?). Recruiting is now the number one priority for Iowa, Penn State, Ohio State, and all the other heavy hitters out there. And Iowa saw it pay off big time this season with Lee. Without him, who knows where the Hawkeyes end up?

The subtle changes in the way coaches speak, the way the wrestlers talk about family, fun, and caring for one another, the willingness to go the extra miles for them by the program, all of those things have and will continue to shape who Iowa is and how they go forward. I don’t think that it’s a bad thing, it’s just different than Iowa has been, or at least what they’ve shown the public in the past.

That’s really my only point, it’s just hard to explain.

*And before everybody jumps on here with what about Tom Ryan, what about Jody Strittmatter, what about this person and that person, I get it. It’s happened in the past, and it will continue to happen. Like I said, for some reason, it just feels different to me this time around.*

One thought on “Ryder: Recruiting of DeSanto by Iowa shows evolution in staff strategy”