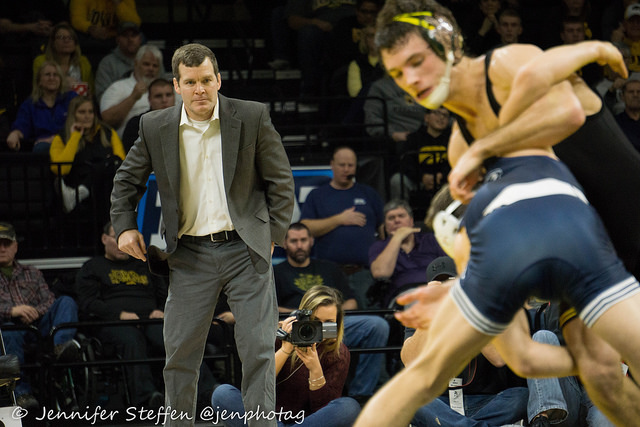 IOWA CITY, Iowa — University of Iowa head wrestling coach Tom Brands has received a three-year contract extension, and the UI Athletics Department announced Friday it will begin exploring possibilities for a new wrestling training center. Both announcements were made by University of Iowa Henry B. and Patricia B. Tippie Director of Athletics Chair Gary Barta.

Brands, who has won three NCAA team titles and coached 10 national champions since taking over the program in 2006, is now under contract through 2022-23.

“Tom embraces the challenges and responsibilities associated with leading the Iowa wrestling program,” Barta said. “He is committed to our philosophy of ‘Win, Graduate, Do It Right.’ There is tremendous momentum behind our wrestling program and I’m excited about the future.”

“I’m fortunate to be a part of an institution that is committed to providing a world-class experience to its student-athletes,” Brands said. “We have tremendous leadership and I thank Gary Barta, Barbara Burke, President Bruce Harreld, and the entire campus community for their continued support of the Iowa wrestling program.”

Barta also announced that the department will conduct a facility feasibility study that could lead the Hawkeyes to training grounds outside of their traditional second floor space at Carver-Hawkeye Arena, where they have trained since the building opened in 1983.

“As part of our on-going commitment to student-athletes, the department will begin a feasibility study for the potential development of a wrestling practice facility,” Barta said. “The study will allow us to evaluate our options for the continued enhancement of Iowa wrestling.”

“There is a great deal of momentum behind this project and that’s a testament to the support and vision of our fans and leadership,” Brands said. “We expect to be the best. There is no question. There is no starting point. There is no end. It’s a continuous process and this is the next step in that process.”

The Iowa wrestling program has led the NCAA in attendance in each of Brands’ 11 seasons, setting the dual meet attendance record in 2015 when 42,287 watched the “Grapple on the Gridiron” inside Kinnick Stadium.

Carver-Hawkeye Arena also hosted the United States Olympic Wrestling Team Trials in 2012 and 2016 (setting an attendance record in 2012), and will host the United World Wrestling World Cup in April, 2018. The World Cup is the annual international dual meet championship that features the top eight men’s freestyle wrestling teams in the world.

In 2016, The United States Olympic Committee named Iowa City one of seven “Olympic Hometowns in America.”

“Wrestling at Iowa is a lifestyle,” Brands said. “It’s practiced every day in the classroom, in the household, in the community, and on the mat. Our administration knows it. Our fans expect it. And we love it.”