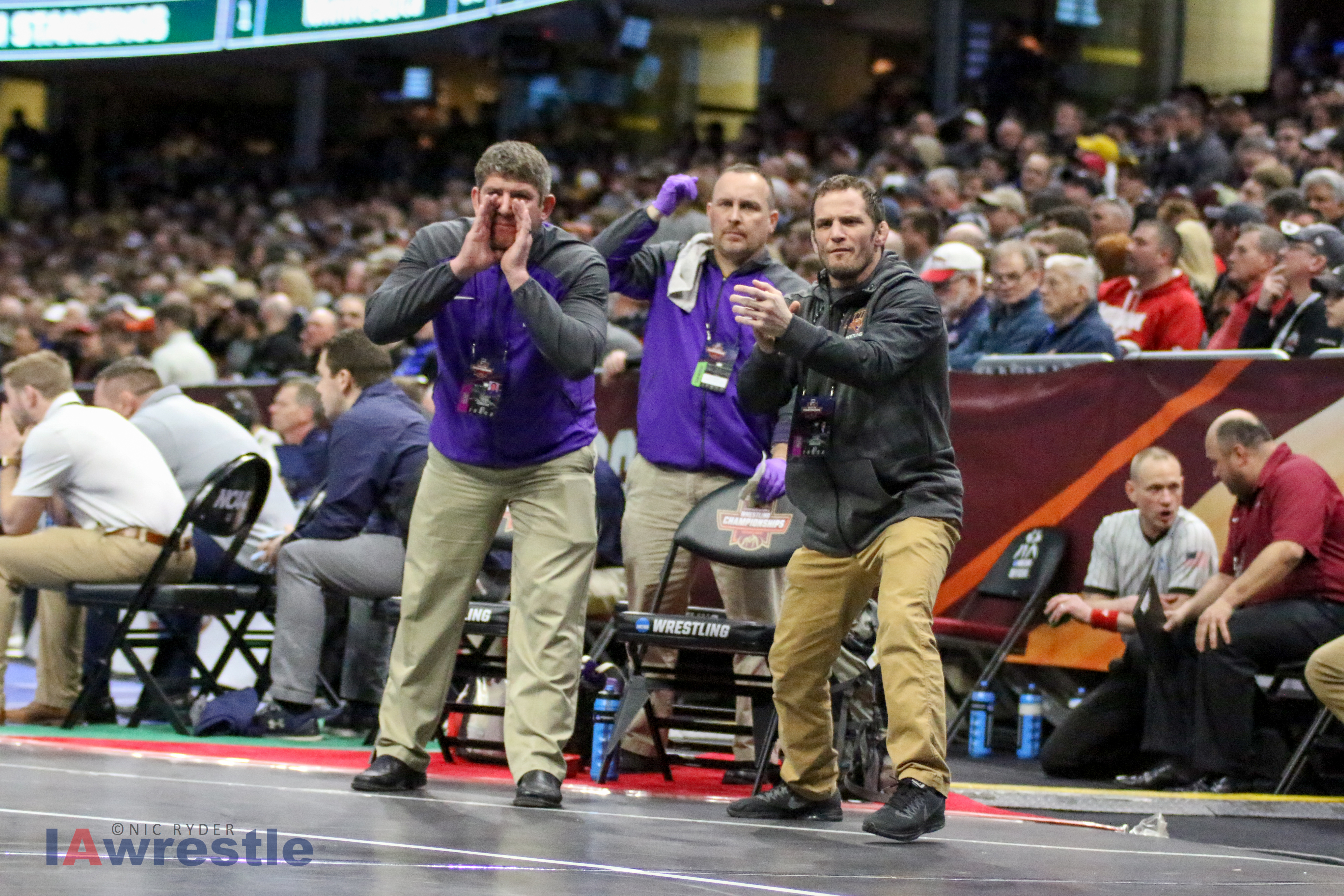 I’m not the best writer out there, and I don’t handle disappointment very well.

Which maybe explains why I’ve waited so long to recap the Northern Iowa wrestling season. Because I don’t know a better word to describe the 2018 NCAA wrestling tournament for the Panthers. Disappointing. I spoke with UNI Head Coach Doug Schwab last Monday about his teams’ season and he expressed the same feelings.

“You get a little bit of time to reflect, I don’t think I’ve ever left a tournament feeling….I mean I’ve felt better than this,” Schwab said. “I don’t know if you ever leave the tournament feeling about what some of the guys didn’t get, or the guys who weren’t on the stand.”

“We have to do an even better job of getting them prepared.”

But! In the interest of growing as a person *shudder* I’m going to start with the good.

Jacob Holschlag, the Panthers’ 197 pounder, capped his season off becoming and All-American, finishing 5th last weekend. Holschlag went 23-13 as a starter and was dominate on top all year.

And that’s great! It’s especially crazy considering Holschlag doesn’t even weight 197 pounds. On Friday he said that he weighed in at 195 and change. He avenged a pair of losses to Missouri’s Willie Miklus, and that included a loss in his very first match of the tournament, a 7-3 decision. He won six matches on the backside of the bracket to take home UNI’s only hardware on the weekend.

And his teammates were right there beside him. Holschlag talked about it after his bloodround match, and Schwab commented on it too.

“The great thing for me is that they were great teammates, they were there, they came to all the seasons. Sometimes you don’t see guys, they’ll shrink away but our guys didn’t do that. That’s important that we share in our success and share in our pain.”

He absolutely deserves everything he earned last weekend. He and the coaching staff may be the only ones who thought he could do it and by god, he did it.

Jacob Holschlag is an All-American.

UNI went 6-5 on the year, and when you consider all the factors, that’s not so bad. It was UNI’s first year wrestling in the Big 12 (granted, not a complete Big 12 Schedule, but still), and they were without one of their better wrestlers in Bryce Steiert, who they chose to redshirt this season.

And they bring everybody back. Not one regular starter graduates this season, so there’s room for growth if they can find it. Not only does that include Holschlag but two other All-Americans in Drew Foster and Max Thomsen, both of whom will have high expectations again next year.

The Panthers knocked off North Carolina, Oklahoma, and Iowa State this season. Two of those they’ll see again next season (more on that below) and getting the win over UNC was a good early win. W ith the addition of Steiert those margins should grow and UNI should be able to close the gap on some of the duals they lost.

The other good thing about the year, and it’s crazy how this is almost an afterthought, is that UNI took 2nd in the Big 12 in their first year of competition in the league. And they had two Big 12 champions in Drew Foster and Taylor Lujan. That’s pretty cool.

Not so good stuff

The Panthers came in with sky-high expectations, including from me, because of the regular-season MAC Championship they won last season, because of the move to the Big 12, and because Schwab has the incredible ability to get you to believe in his wrestlers.

But with the redshirting of Steiert, Rudy Yates’ inability to crack the starting lineup (except once, a loss against North Carolina’s Zach Sherman) at 133, and difficult times at 157 and heavyweight, the Panthers lost a couple of duals they probably shouldn’t have. The duals against South Dakota State and Arizona State were close enough for them to win, and duals against Cornell, Oklahoma State, and Missouri would probably have been within reach with those holes plugged.

“You can look at the season, and a lot of people say, ‘Aw great job,’ we were second in the Scuffle, second in the Big 12, but that’s not what we’re striving for. We have to evaluate and do a better job,” Scwhab said.

Overal, Next Year, and Expectations

So I don’t really know what to make of UNI’s season this year. While I think it was above average (they took SECOND PLACE in the Big 12 in their FIRST YEAR competing!) they were only one dual above .500 and lost some duals they shouldn’t have. They only had one All-American, though it was a new one in Holschlag, so that only adds to the legacy.

But it was a disappointing end to the year. And it seemed to me that UNI never really got in a rhythm. Whether that’s because they had the entire month of January away from the West Gym, or just the lack of dual meets in general, or the schedule weird-ness in general, I’m not sure. Whether or not that affected the actual wrestling, I don’t think we’ll ever know.

But maybe we (I) need to reevaluate our (my) expectations for UNI. While I don’t believe that the national tournament is the only thing that matters, it is what everyone else seems to believe. So with that in mind maybe getting two All-Americans is a success for the Panthers, though I think they could have as many as four next year.

But I expect them to be right there in the Big 12 again. With more experience against more conference opponents, I don’t see why they can’t close the gap on Oklahoma State a little bit more.

So one thing that will change next year is the schedule. UNI only had four(!!) home duals this season, but that number should go up as they’ll have four conference duals alone in 2018-19. From what Schwab said Panther fans can expect eight Big 12 Conference duals, four at home and four away.

Cornell will bring their squad in to the West Gym for a dual and UNI is looking to bring in another team or two. They’ll travel down to Missouri again and go to a big tournament (CKLV, Midlands, Scuffle), but they haven’t decided on which one yet.