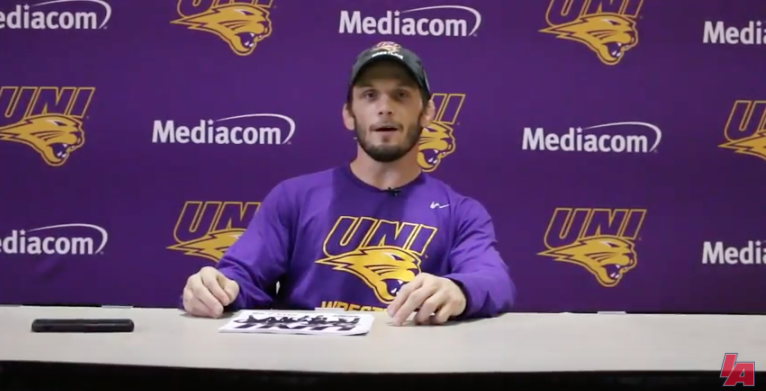 It’s Doug Schwab’s eighth year as the conductor of the Panther Train. His expectations haven’t changed, but those on the outside are putting smaller and smaller numbers next to “UNI” in the rankings. That makes people pay attention.

“We should be at this point as a team. We should be having the best team that I’ve had. But these guys, it’s a team right now and they’re taking it over.”

For a few of those eight seasons, there might not have been much to talk about in terms of returning firepower. But this season there are 5 returning NCAA qualifiers, two All-Americans, and a lot of high expectations around the wrestling program in Cedar Falls.

Guys, Schwab says, like Max Thomsen and Drew Foster, both of whom are returning All-Americans.

“Last year, no one was asking questions about him [Foster] and now he’s going to the All-Star dual. Who’s going to be the next guy who’s going to do that?

“We’ve got a whole lineup of them that are ready to do it.”

Guys like Josh Alber, Taylor Lujan, Jacob Holschlag, all of whom are returning NCAA qualifiers, but missed the medal stand.

Young guys like Rudy Yates and Carter Isley, both redshirt freshman looking to break through not just in the West Gym, but on the national scene as well.

And Schwab sees things in their young guys who are not expected to wrestle in the starting lineup.

“Really excited about the freshman, even though it was a ‘light’ recruiting class, I like what these guys are doing. Just the energy that they’re showing, the effort, the focus.”

The time is now for a lot of these guys, especially the ones in the middle group. Alber is the old man of the group as a junior. He’s a two-time NCAA qualifier, but has yet to get to the podium in March. He’s moving up from 133 to 141 pounds this year and hopes to keep the momentum going throughout the year.

“Toward the end of my freshman year, and last year, I just started to get to the point where I wasn’t having much fun, wasn’t really enjoying wrestling anymore. I met with the coaches and discussed it and we all decided it was the best thing to do.

“A happy me is a better wrestler, so just try to keep me happy.”

He’ll have a tough task as UNI moves into the Big 12 this season, what with Dean Heil, Bryce Meredith, and Michael Longo all sitting in front of him to start the year.

Thomsen and Foster are both ranked in the top 5 of their respective weights and they’re obviously getting some attention. Both men will be in action this Saturday night at the NWCA All-Star dual in New Jersey.

“Excited for that. It will be a little weird, I don’t know what to expect out of it, really. I’m just excited.”

UNI will be without one of their hammers this season though; 165 pounder Bryce Steiert is going to redshirt.

“We’re going to keep him real close to the team. There’s some areas that we’ve talked about that we want to help him grow and see him take some of those steps.”

The loss of Steiert means that UNI has a hole to fill, and it appears that Isaiah Patton will fill that weight. Up from 157 last season, the sophomore will have big shoes to fill.

We also learned that Rudy Yates, the presumed starter at 133, has an injury and won’t wrestle for the first few weeks of the season.

All in all the possible lineup is about what we expected going into media day. UNI will wrestle at the Harold Nichols Open this Saturday, and that will help determine 157 and 197. Other than that, the lineup seems to shake out like this:

Not everything will go according to plan; hardly anything ever does. But this lineup is one of the youngest that Schwab has ever had. And it’s one of the best.