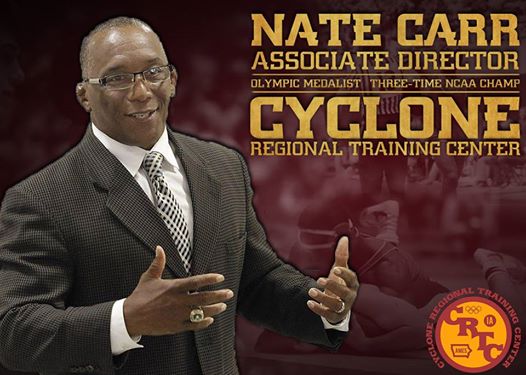 “We are all very excited about bringing Nate into the Cyclone RTC,” C-RTC Director Kevin Dresser said. “I said from day one that we want to make Ames, IA the place to train for all levels and all styles and Nate fits right into that plan.”

Carr joins the C-RTC staff after coaching for three years at Perry High School, a national powerhouse in prep wrestling in Massillon, Ohio. As the Associate Director, Carr will assist the C-RTC and head coach Mike Zadick in a number of aspects including athlete development and fund raising efforts.

“Anything I can do to help them rise back to the top, I want to do,” Carr said. “We can do this. The most important thing is dreaming and building, it’s bringing back that history and making it the present.”

Carr grew into one of the most prolific athletes in school history. The Erie, Pa., native won three national titles and two Big 8 titles while wrestling for the Cardinal and Gold. Following his collegiate career, Carr competed for the United States World Team on a number of occasions and won the Bronze medal at the 1988 Olympics in Seoul, South Korea.

In 2000, Carr was inducted into the alma mater’s Athletics Hall of Fame. He is also a member of the National Wrestling Hall of Fame.

“When we look at that mission statement, Nate brings so many things to the table for such a position,” Dresser stated. “He will be on the ground right away selling our dream and working with our staff and our athletes The Cyclone RTC just got much stronger and a special thank you to all of you who helped make this position happen. Your contributions do make a difference.”

Carr will be moving to Ames with his wife, Linda. His position as Associate Director will begin on June 1. Nate’s son, David, is a four-time Ohio state champion and will be a freshman in Ames this fall.

“I like to think of myself as a professional encourager,” Carr said of himself. “Anything I can do to help bring these young athletes along to be champions on and off the mat, I’m going to give 100% of myself to that. We’re going to make things happen that people are saying are impossible.”

For more information on the Cyclone Regional Training Center and to find out how you can get involved today, visit cyclonertc.org.