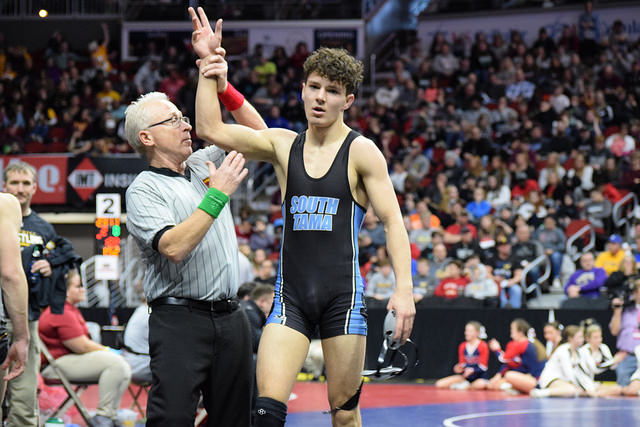 The Wartburg Knights have landed the commitment of three-time Iowa high school state medalist Brady Fritz of South Tama. A 2018 runner-up at the 132-pound weight class in 2A, Fritz took the time to give IAwrestle some insight on his decision.

“I liked everything about Wartburg.” Fritz told IAwrestle, “The coaches are great, I felt great on campus, and the guys are fun to be around.”

The decision for Fritz was between one of Wartburg’s Iowa Conference rivals, Coe College and the Knights but in the end the lure of wrestling for Wartburg’s rich tradition is what led the South Tama wrestler to want to continue his career in Waverly.

“It’s great to be continuing (their tradition) and hopefully I can add to the legacy. Obviously they are doing something right and I want to be a part of that 100%.”

Entering the state tournament as the #5 ranked wrestler, Fritz had his work cut out to obtain his goal as state champion, and he nearly met that mark, but fell just shy in the 132-pound finals. Despite his disappointing finish, Fritz earned a big statement win when he defeated West Liberty’s Will Esmoil in the quarterfinals. Esmoil carried the #1 ranking and was considered one of the weight’s favorites to win it all.

After sixth as a sophomore and seventh as a junior Fritz gave a lot of credit to his jump in improvements to his work put in over the summer, and his coaches for getting him ready physically and mentally for the big matches.

Joining Fritz in the 2018 Knights’ recruiting class is former 2A state finalist Blake Steege (Denver), who missed 2018 with an injury and NJCAA All-American Isaiah Cox, who is transferring in after wrapping up his career at Iowa Lakes Community College. Fritz projects at 141 pounds for the Knights.