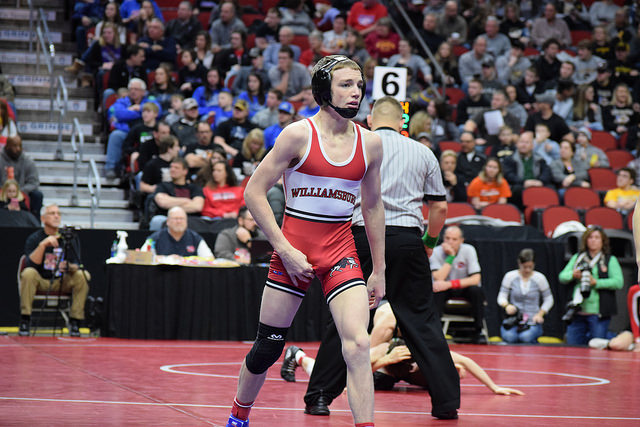 There aren’t many of them left, but another top 50 wrestler in the state of Iowa has come off the board as Grayson Kesterson has committed to wrestle for UW-La Crosse. Ranked #47 in IAwrestle’s Fab 50, Kesterson projects as a 125-pound recruit on the next level. After wrapping up his career as a four-time state qualifier for Williamsburg, Kesterson took the time to catch up with IAwrestle on his decision.

“I really like the campus and how close everything is.” Kesterson said of his commitment, “I also really like coach (Dave) Malecek and how close knit the team is. Malecek helped me get through the loss at state and motivated me to keep going the next day and finish hard.”

A 2017 state champion, Kesterson’s bid to repeat was upended by Andrew Flora (ADM) in the state semifinals. From there Kesterson battled back to win the next best thing, a third place finish  to end his career a two-time state medalist.

“I really wanted to just eat and not work out to make weight the next day.” Kesterson said of his semifinals loss, “But I felt like I had to show what I was capable of and how I can work off that loss and get ready for my college/freestyle career.”

One of the state’s top lightweights, Kesterson was also selected to compete for Team Iowa in the Pittsburgh Wrestling Classic. Kesterson will travel to Pennsylvania at the end of the month to face a WPIAL opponent.

“I’m excited and honored to have the chance at such a huge event. A little nervous but excited.”

One thought on “Grayson Kesterson Commits to UW-La Crosse”