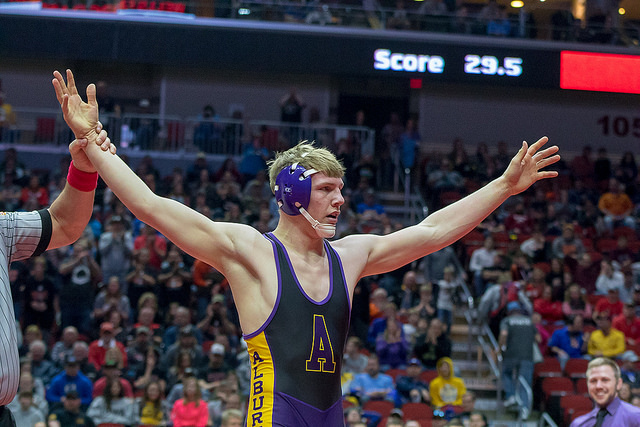 “There academics fit right up my alley with the programs they offer for Agriculture. The environment up there I super cool and I feel like I can make it feel like home.” Sloan said of his decision, “The coaches were great and they have a good thing going up there.”

One the class of 2018’s top upperweights, Sloan recently won his second state title at 195 pounds by pinning a potential future conference rival, Hunter DeJong of Sibley-Ocheyedan (headed to Iowa State) in the finals. It was Sloan’s fourth career medal a the state tournament as he placed fifth as a freshman, first as a sophomore, and third as a junior.

Checking in at #34 in our last Fab 50 release, Sloan was the current #3 prospect available in the state of Iowa. He will be joining fellow top 50 Iowan #25 Zach Price (Johnston) at South Dakota State, who have ramped up their interest in the state of Iowa over the past few seasons. The current Jackrabbit lineup features two other Iowa natives, Henry Pohlmeyer (Johnston) and Alex Macki (Ballard) who start at 141 and 285 pounds respectively.

Sloan projects as a 197-pound wrestler for SDSU, and also considered Division II Nebraska-Kearney and Division III Coe College before committing to the Jackrabbits.