3A First Round Matches to Watch – Updated Results 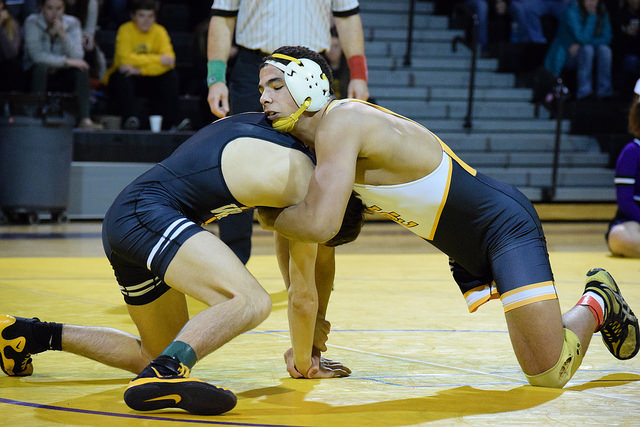 113 – #7 Jakey Penrith (Cedar Falls) vs #10 Noah Blubaugh (Ankeny Centennial)
Jakey missed a good part of the season with an injury, but is back now and looking to climb the podium at The Well, Penrith placed seventh at this weight a year ago. Blubuagh wrestled #3 Nate Kahoe very tough in the district finals dropping a 5-4 decision before winning a wrestleback to qualify for State. The winner of this match likely gets Super Freshmen #1 Caleb Rathjen in the quarter-finals.

120 – #2 Kobey Pritchard (Southeast Polk) vs #3 Conrad Braswell (Prairie, Cedar Rapids)
It happens every year at State, first round match-ups between top 5 opponents. Pricthard turned in a stellar performance on his 18th birthday winning districts over #6 Monroe by major decision. Braswell had been undefeated against 3A competition before dropping his district final to #5 Dylan Albrecht. Winner of this battle likely faces a match up with #1 Kyle Biscoglia in the quarters.

120 – #5 Dylan Albrecht (Waverly-Shell Rock) vs #6 Ben Monroe (Ankeny Centennial)
These two will hook up for the first time this year. Both wrestlers where on the stand last year with Monroe finishing runner-up at 106 and Albrecht 6th at 120. Monroe has been very solid against competition outside the top 10 winning most his matches by bonus points. Albrecht has been solid all year, he was able to avenge an early season loss in the district finals defeating Braswell 5-1.

132 – #5 Graham Gambrall (Iowa City West) vs #4 Caleb Corbin (Valley, West Des Moines)
Rare occasion here, a top five clash between 2 uber freshmen in the first round. Gambrall enters State on a 15 match winning streak, defeating crosstown rival Lance Bormann in the district finals. Corbin bounced back and forth between 138 and 132 early in the season before deciding to stay down. Corbin had a great win over Matthew Jordan at conference. This should be a great match between two wrestlers you are sure to hear from in the future.

138 – #5 Will Jefferson (Bettendorf) vs #9 Nathan Marchand (Southeast Polk)
Jefferson holds a 1-0 advantage in the season series, defeating Marchand 6-3 in the semi-finals of the Ed Winger Classic. Marchand went through a brutal district, losing to Deville Dentis in the semis before winning his wrestleback on a fleeing the mat call over Conner Dalton. This is one of 3 very tough first round draws for the Rams.

152 – #4 Lance Runyon (Southeast Polk) vs #5 Kyle Hefley (Iowa City, City High)
Runyon has been solid in the middle of the Rams lineup all year, with his only in state defeats coming to Stotts. Hefley had a 17 match winning streak snapped in the district finals to #3 Steffensmeier, winner of this one likely battles #2 Lara in the quarters.

160 – #2 Zane Mulder (Dallas Center-Grimes) vs #3 Jake Matthaidess (North Scott, Eldridge)
Mulder enters State will all but 3 of his wins coming by bonus points. The Grand View University commit is looking to close out a solid career by becoming a 4-time State place-winner. Matthaidess, only a sophomore is making his first appearance at The Well. #1 Nelson Brands likley awaits the winner in the quarters.

195 – #4 Brayden Wolf (Waverly-Shell Rock) vs #5 Ethan Barry (Clinton)
Wolf has assembled a impressive sophomore season racking up 40 wins, with all of his in-state loses coming to top 3 guys. He defeated #6 Stoner-DeGroot in the district finals 6-3. Barry, a sophomore as well had a 10 match winning steak snapped in the district finals when he fell to #1 Tyrell Gordon. This is the right side of the bracket to be on #1, #2 & #3 are all on the other half.

220 – #7 Beau Lombardi (Valley, West Des Moines) vs #4 Isaac Bales (Glenwood)
Bales is 2-0 vs Lombardi this year with the first win coming at Jack Mendenhall Invitational in early January 9-4, and the second victory coming at the Ed Winger Classic 11-2. Can Lombardi reverse the outcome in the third match up of the year? Winner should face #2 Greg Hagan in the quarters.

285 – #10 Josh Vis (Cedar Rapids Kennedy) vs #6 Griffin Liddle (Bettendorf)
Vis holds a 2-0 lead in the season series with both victories coming the first two weeks of the season. Vis only a sophomore took a couple lumps late in the season, but rebounded to win his district finals match by fall. Liddle a freshmen who has been improving each time out dropped a hard fought district finals match to #4 Dylan Olson 4-1.

3 thoughts on “3A First Round Matches to Watch – Updated Results”