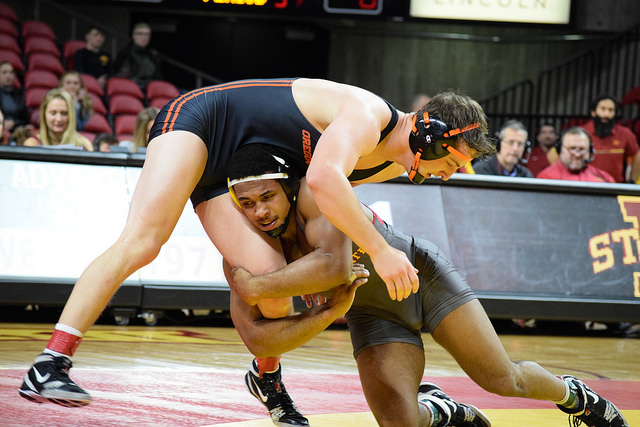 For the third straight weekend Iowa State will gear up for a two dual weekend first taking on Fresno State at home this Friday before a short turn around and wrestling Northern Iowa on Saturday in Cedar Falls. Both of the opponents on the weekend slate are new additions to the Big 12 conference, with instate rival Northern Iowa joining the conference from the MAC, and Fresno State joining outright after the program was resurrected.

This will be the second time these two teams have met this season. Last month while both were in attendance at the Virginia Duals the Cyclones managed a 25-16 victory despite splitting five matches apiece with the Bulldogs. The lineup from that dual is fairly significant than what we have seen head coach Kevin Dresser use of late, which has the potential to put this dual in Iowa State’s favor even more.

In the five weights that Fresno State won in the first meeting, two of those weights were contested by backups. Junior Dante Rodriguez got the call at 149 pounds and freshman Gannon Gremmel went at 285 pounds. There is little argument that Jarrett Degen, who is one of two Cyclone wrestlers that appear in The Open Mat’s rankings, is an upgrade. Likewise at heavyweight junior Marcus Harrington has been a strong presence for the Cyclones this season and he too has the potential to reverse that outcome that happened at his weight in the teams’ previous meeting.

One of the other more interesting wrestlers to keep an eye on this weekend is Sammy Colbray, who has won four of his last five matches and owns two wins over ranked wrestlers during that same stretch. This weekend will go a long ways in determining if Colbray has officially turned the corner or if he still has a ways to go. In the first meeting with Fresno State Josh Hokit came out on top 7-2 in sudden victory against the young Cyclone. If Colbray can manage to find a way to come out on top of this meeting it could show some real growth and adjustments being made, and with another ranked match looming on Saturday against UNI’s Jacob Holschlag we could see Colbray break into the rankings with a 2-0 showing.

Two other upperweights figure to be in the lineup that differ from the first go around as junior Danny Bush has received a majority of the dual starts at 174 pounds. At the Virginia Duals sophomore Hank Swalla won in sudden victory over Dominic Kincaid. We may also see Brady Jennings compete at 165 pounds following his banner weekend that included an upset over #19 Andrew Fogarty (North Dakota State).

During Coach Dresser’s press conference the head Cyclone commented that there will be a wrestle off this week between Bush and Swalla to determine the starter.

The final question looming over this squad this weekend is whether or not we will see freshman Ian Parker go at 141 pounds. In his debut at the new weight Parker managed to knock off a three-time NCAA qualifier and then followed that with a win over two-time NCAA champion Dean Heill cementing him as a force. The positive momentum hit a bit of a bump however, when Iowa State announced that Parker did not even travel with the team on the Dakotas trip opting to forfeit the weight instead.

Dresser also noted during his press conference that Parker suffered a knee injury, but that he expects his wrestler to be able to compete this weekend.