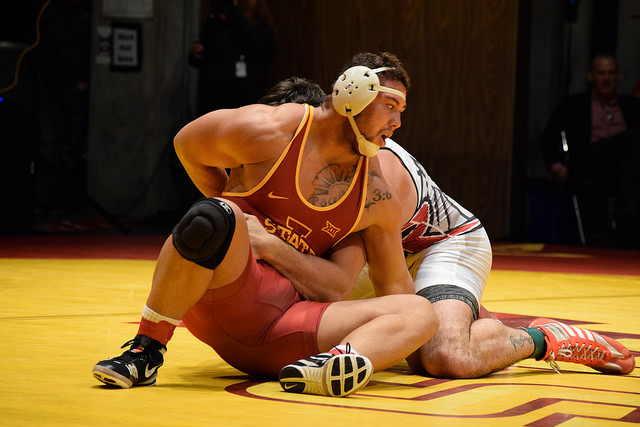 It was all Bison early in the dual as freshman Jarrett Degen was the only lower weight to win a match for Iowa State with his 8-2 decision over Kyle Gliva. According to the Iowa State Wrestling Twitter account freshman Ian Parker remained in Ames this weekend due to injury which caused the Cyclones to forfeit the 141-pound matchup. Winning that forfeit was a familiar face, Council Bluff-Thomas Jefferson graduate McGwire Midkiff recieved the forfeit at 141.

With North Dakota State carrying a 16 point lead and favored in at least one of the five remaining matches the outlook was bleak for the Cyclones, but Brady Jenning provided the spark that would ignite the comeback with his 7-2 decision over #19 Andrew Fogarty. The win kicked off the five match win streak that turned the dual to Iowa State’s favor. Iowa State also benefited from two bonus point victories that came from upperclassmen. Senior Dane Pestano and junior Marcus Harrington each notched major decision to push their team to victory.

Iowa State will head south for the final dual of the weekend when they head into Jackrabbit country to face South Dakota State.

One thought on “Upperweights Push Cyclones Past Bison”