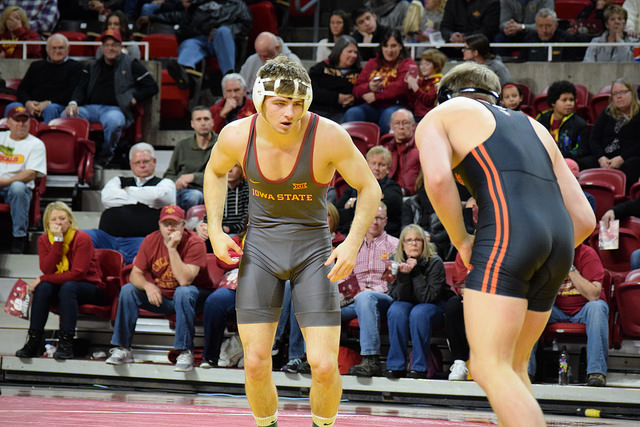 The Iowa State Cyclones will close out their two dual weekend road trip with the #19 ranked South Dakota State Jackrabbits. Led by former Cyclones Chris Bono and Jon Reader, the Jackrabbits have emerged as one of the top mid-major programs in the country, with Bono leading two wrestlers to Division I All-American status last season. The team features four ranked wrestlers and are led by #1 ranked Seth Gross at 133 pounds.

Coming off a huge comeback win, the Cyclones head into this dual major underdogs to their Jackrabbit opponents and part of that is due to the absence of a 141-pound wrestler. The last couple weeks have been rough on this weight for Iowa State as Kanen Storr left the team due to a transfer request and his replacement, fellow freshman Ian Parker, is apparently dealing with an injury that prevented him from traveling with the team this weekend. The hole caused ISU to forfeit in their dual with NDSU on Friday.

The loss of their 141 coupled with Kevin Dresser now on his fourth string at 125 pounds leaves a tall mountain for this Cyclone team to overcome, especially since we haven’t even considered the fact that Gross is a huge favorite to earn bonus points at 133 pounds for the Jackrabbits. The junior is 51-3 over the last two seasons and has a bonus rate over 85% during that stretch.

Two Iowans will appear in this dual for SDSU. Hailing from Johnston high school is 141-pound wrestler Henry Pohlmeyer, who looks to be receiving a forfeit unless Dresser decides to bump sophomore Markus Simmons away from Gross at 133. At heavyweight Ballard prep Alex Macki will setup an all Iowan battle with Marcus Harrington.