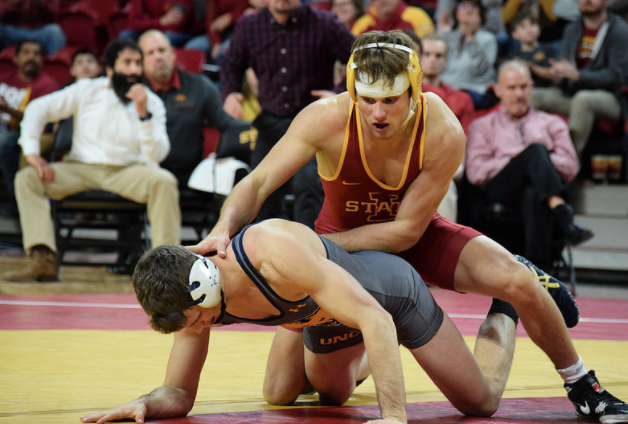 Redshirt freshman Kanen Storr recently requested and was granted his release from the Iowa State wrestling team. Since the news broke Storr has been relatively silent on the matter, but after head Cyclone coach Kevin Dresser alleged tampering by “former coaches”, Storr decided to break his silence and release his own statement on what caused his request for release.

Below is the statement issued on Storr’s personal social media account:

The Real Story & How we got Here

It’s difficult for me to write this but in the end I have to do what’s right. I chose to wrestle at Iowa State because of the long outstanding tradition and wanted to join the legacy. The story Kevin Dresser and his staff have been portraying in the media is simply not true and now it’s time to share what really happened:

Dresser’s claim that I never gave him or his staff a chance is not accurate. I was excited to work with Dresser, Zadick, St.John, and Metcalf. I showed up to every meeting, practice, lift, and competition ready to put in work and lay it on the line for ISU. I was excited and willing to do whatever was asked of me in order to win at the highest level. However, the more I was around the staff the more I learned who they were and what they were about.

During season I met with the coaching staff multiple times and voiced concerns, my hope was that through honest communication we could work together on coming up with a solution. I told them I needed feedback after matches, film breakdown, and better communication all around. We agreed to make a conscious effort and see how the rest of the season would play out.

I felt everything was going ok until our Sunday dual vs West Virginia on January 21. As I was walking off the mat after a tough loss in overtime, Dresser called me over and before he could speak, Metcalf got up and shoved me towards the locker room and said, “Get the hell out of here.” In frustration, I replied “I’m already out of here.” A coach should never put his hands on an athlete like that, especially in a public setting coming off a loss at a competition.

The next day, I was called into the office by Mike Zadick to watch film (first time all season) and after we watched the match he said, “Alright now we have to address something” he went on to say what Metcalf did wasn’t right and the situation never should have happened but he was glad he did because it caused an honest response from me. I told him I was just mad coming off a loss and getting pushed like that caused an emotional response. What happened next was unethical and put a lot of stress on me. He continued to give me the ultimatum and told me “you can either commit yourself here and stay with us for the rest of your career, or you have until tomorrow morning to ask for a release. If you don’t ask for your release by tomorrow, then we will not grant you one later on.” I took the night to think about it and met with him the next morning. Because I did not feel safe and comfortable with the coaching staff here, I asked for a release… BUT before I committed to it, I had asked to finish the season and to compete all the way through March and the national tournament. He told me he would discuss it at their staff meeting, and sure enough he called me back an hour or two later and told me to “pack up my locker and go on my separate way.” Although it absolutely kills me to not be wrestling at nationals this season, I knew I had to get out of such a negative situation. I was then dismissed from the Iowa State wrestling team.

I am very sad that it had to end like this and that I won’t be able to compete in my first NCAA tournament but I would not tolerate being blackmailed to stay in something toxic for the next 3 years. I want coaches that I can look up to in wrestling and in life and I was not able to find that at Iowa State. Dresser claims that he is not trying to hurt me and only wants ramifications for whoever has been “tampering” with me but yet he had tried to take away my scholarship from this semester after I was forced to leave the team already.

Any claims of tampering are a lie, and Dresser is trying to point the finger elsewhere when in reality he should be looking at his staff and within on how they handled my situation. Also, I find it ridiculous that all of these interviews and articles have been published from their point of view, but yet when I attempted to get my side of the story out to multiple news platforms, they refused to publish the story from my perspective, and that’s why this is finally coming out now.Has there been communication between me and the Paulson’s? Yes, they are my landlords, and they are positive role models in my life. I felt unsafe here and didn’t know who else to turn to and trust. And when I searched for legal help through Iowa State student services, they would not help me because they are not allowed to pursue anything against the University. Has there been any type of recruitment or “tampering” from the Paulson’s? Absolutely not! I reached out to them for help and guidance within limits of my faith and emotional issues caused by my unethical treatment. I hope this sheds some light on the situation.