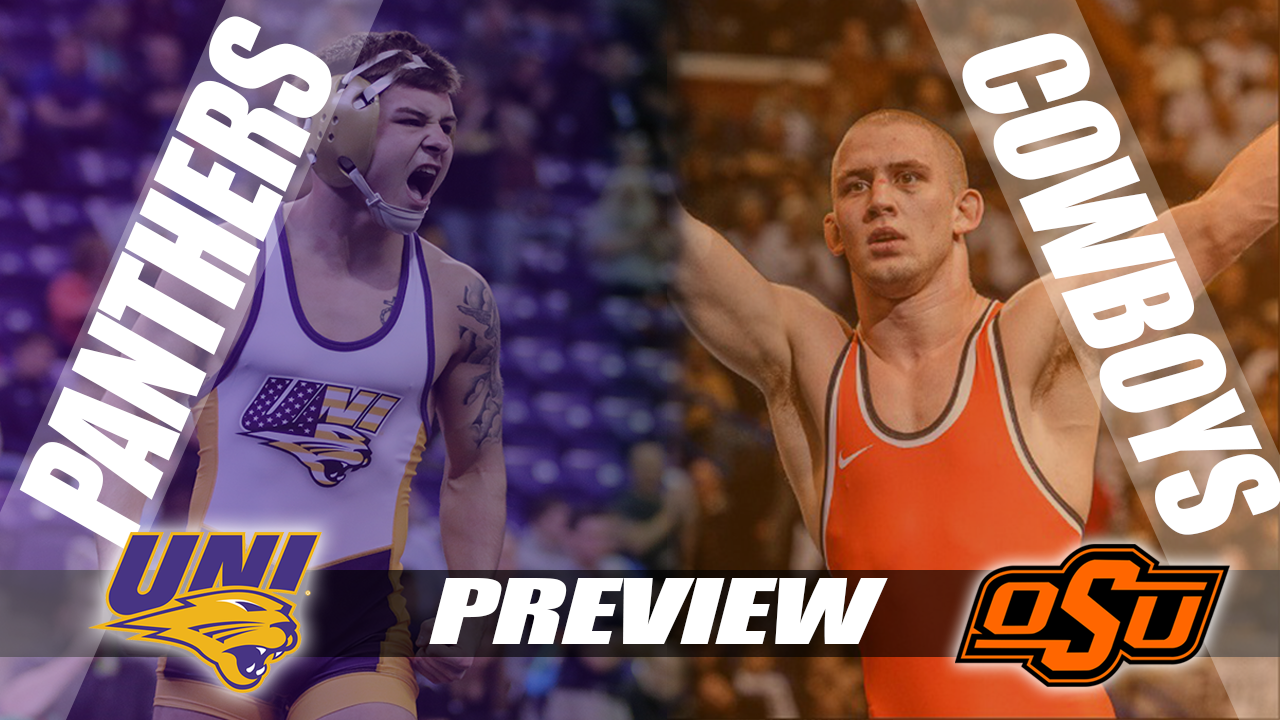 The biggest road test for Northern Iowa comes this Saturday as they travel to Stillwater, Oklahoma as the Panthers take on perennial Big 12 favorite Oklahoma State. The Cowboys haven’t quite lived up to expectations (if only dropping two duals by a combined 11 points isn’t living up to expectations) but an unexpected road loss to Iowa and then a close loss to the regular-season MAC champion Missouri have knocked them down a few spots to seventh in the national rankings.

#13 UNI comes in after a week off and a road loss to South Dakota State 22-16. The Panthers aren’t exactly struggling, but they’re also not in that next-level-status this season. It’s also a weird season because they have had so few duals – 11 – and only four at home. Getting a handle on where they are right now is a bit difficult as it feels like we haven’t seen them in a long time.

Rankings-wise there are a few matches that require attention. 125, 141, 149, 174, and 197 pounds all feature two ranked wrestlers, with UNI favored at two of the weights. #7 at 141 pounds, Josh Alber is actually ranked ahead of the defending, two-time NCAA champion Dean Heil. Heil is currently ranked eighth after dropping back to back dual matches, the first by fall to Jaydin Eierman (Missouri) and the second a 3-1 decision to  Ian Parker (Iowa State). The Cowboy has lost four times this season after rattling off 55 straight wins between the 2016 season and the current one.

This will be a big test for Alber, who has only three losses on the year and hasn’t lost since the Southern Scuffle against Penn State’s Nick lee. His other two losses were to Yianni Diakomihalis, who is currently ranked #3 and is 22-1 on the year. If Alber can get this win, even if Heil is sliding a bit, it would give Alber a huge boost going into the Big 12 championships (maybe even securing him the #2 seed).

The other match pitting two top-ten ranked wrestlers is at 174, where #7 Taylor Lujan will take on #9 Jacobe Smith. Smith is 15-4 on the year with three of those losses to men ranked above him, but all of Lujan’s losses (4) have come to men ranked above him as well. This might well be the marquee match of the night, and like Alber’s match, might determine the top seed at the Big 12 tournament in March.

The other match where UNI will be favored is at 149, where #11 Max Thomsen takes on #15 Boo Lewallen. This is a match that Thomsen should win, but he’s been a little gun shy on his offensive attacks against the best competition he’s faced. The match that sticks out in my mind was his 3-2 loss to Troy Heilmann, where neither wrestler took a shot in the second period and Thomsen was unable to break through for a takedown in the third.

Thomsen might have to take a couple more chances against Lewallen to close out the match, and it would be a relief to fans if he could do that earlier in the match.

Every other match with two ranked wrestlers will favor the Cowboys. Starting off at 125 UNI’s Jay Schwarm will look to get back on the winning side of things after dropping his last three matches. In contrast, Nick Piccininni has won his last four matches since losing 10-5 to Iowa’s Spencer Lee a the Iowa/OSU dual.

In a similar rankings-situation, Jacob Holschlag will take on Preston Weigel at 197 pounds. Holschlag and Schwarm’s season mirror each other a little bit, as both have had above-average results but just can’t break through into that next level. A win against Weigel would be big for the upper weight wrestler moving forward, and would certainly be a signature win of the year.

The key to this dual, like so many other duals this season, will be not giving up too many bonus points in the matches with unranked UNI wrestlers. Jack Wagner, Dan Kelly, and Carter Isley probably will not defeat their opponents, and like the dual against South Dakota State, giving up bonus points at those three weights could spell doom for the Panthers. If Logan Ryan could get a win at 157, that would go a long way towards getting UNI the upset.

The odds are not in favor for a Panther win though, especially as a member of the Big 12. Not only is UNI 4-25 all time against the Cowboys, but Oklahoma State hasn’t lost a conference dual since the 2013-14 season, when they lost at #5 Oklahoma 16-15. And they haven’t lost a conference dual at home since the 2009-10 season, when Iowa State came in and knocked them off 20-18.

Also of note: none of the the wrestlers scheduled to take the mat Saturday have wrestled against each other before.

The dual will be televised live on ESPNU at 3PM on Saturday. We’ll have results going on our Twitter, @IAwrestle and have a recap later that day, be sure to check back!