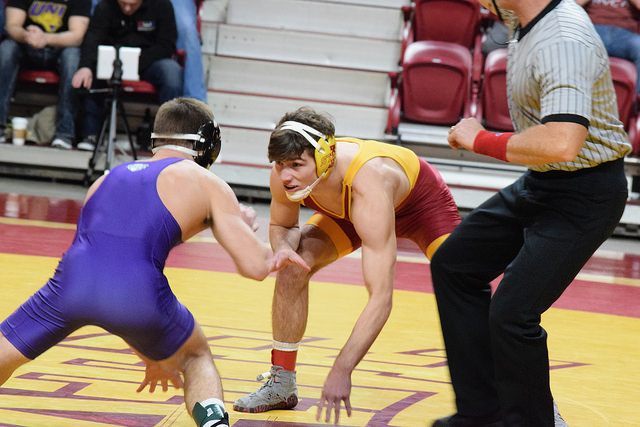 The Cyclones and the Sooners split in total matches won, 5-5, but OU recorded two falls, which proved to be the difference in the contest.

How It Happened
At 141 pounds, Iowa State called up Ian Parker. He was pitted against Oklahoma’s Mike Longo. After a scoreless first, Parker scored a takedown and an escape in the second and held a 3-0 advantage heading to the third. Mike Longo reversed Parker to begin the third, but Parker got to his feet and held on to win the match, 4-2.

The match at 157 pounds was also scoreless after the first period. Chase Straw earned an escape in the second to lead 1-0 heading to the third period. In the third, Justin Thomas scored on an escape, but Straw took the lead 2-1 after Thomas was warned for the second time in the match. Thomas notched a takedown to take a 3-2 lead, but a late Straw reversal pushed him past the Sooner, 4-3.

At the intermission, Iowa State trailed 12-6.

Heading into the final three bouts, the Cyclones trailed 18-6. Iowa State went on to win at 184, 197 and 285, but it wasn’t enough to mount the comeback necessary for the victory.

Dane Pestano picked up his eighth dual victory of the year with an 11-3 major decision over Matthew Waddell. The redshirt senior tallied four takedowns in the Cyclones only bonus-point win on the evening.

For the second straight dual, Sam Colbray’s match at 197 pounds ended in sudden victory. Colbray topped Andrew Dixon for the second time this season as Dixon was knocked for stalling for backing out in the overtime period. Colbray was victorious by 2-1 decision.

Marcus Harrington ended the night on a high note for the Cyclones despite the loss. He closed out the dual with a 7-4 win against OU’s Connor Small. Harrington scored three takedowns to earn his eighth dual win of the year.

Next Up
Iowa State travels to Stillwater, Okla. on Sunday where they will take on No. 5 Oklahoma State. The Cyclones and Cowboys are set to scrap at 2 p.m. in Gallagher-Iba Arena. The dual will be available via Flowrestling.org with a FloPro account.

2 thoughts on “Late Cyclone Rally Comes Up Short Against Oklahoma”